In the previous post, “Roses are red, violets are blue…”, I discussed the general problem of getting style attributes to line up with specific group values and some ways to overcome the problem. In this installment, I want to elaborate on the attribute map functionality in the Graph Template Language (GTL) that I mentioned at the end of the last post.

As I mentioned previously, attribute maps in the SG procedures are defined in datasets while, in GTL, they are coded directly in the template. To see how this code works in GTL, let’s convert a previous SG example into GTL and see how the attribute map connects to the plot. 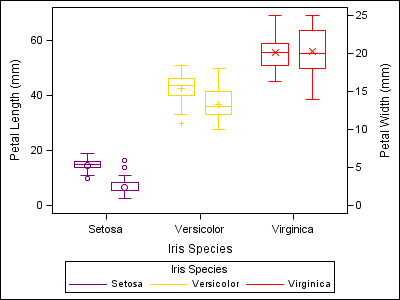 The DISCRETEATTRMAP block defines the associations between discrete group values and visual attributes. The attributes are defined using the standard GTL attribute bundle syntax. The DISCRETEATTRVAR statement is the “glue” to bind the attribute map to a variable. The data variable is specified on the VAR option and the new attribute variable ( MYID_SPECIES) is specified on the ATTRVAR option. This ATTRVAR is used on the GROUP option for both box plots. If the SPECIES variable was used on the GROUP option instead of MYID_SPECIES, the boxes would have been drawn without using the visual attributes from the attributes map.

Discrete attribute maps can also be directly associated with discrete legends. This is a great way to create uniform legends with all possible values that could appear across BY-groups. In this example, I remove the one iris variety by using a WHERE clause; but, because the attribute map is associated with the legend, all three values appear. 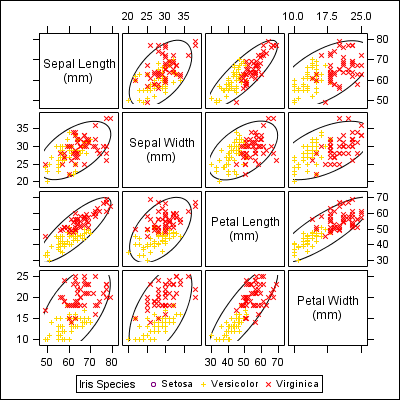 One important item to notice in this example is the TYPE option on the discrete legend. This option is required in this case because the legend does not have enough context to know which type of legend value to display. With TYPE=MARKER specified, the legend knows to display a scatter marker using the marker attributes from the attribute map.

Attribute maps can also be defined for continuous classifier variables. The range attribute map can be used to assign a single color to a numeric range or even a gradient ramp within the range. In the following example, a color is assigned to each range of petal width. 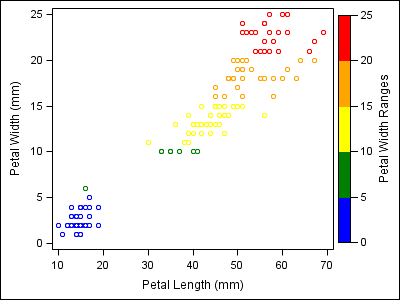 Another variation on this example shows how you can use a gradient function to calculate a gradient between two colors and assign a single color from that ramp to a range. This function can make it much easier to determine ramp colors across a set of ranges. 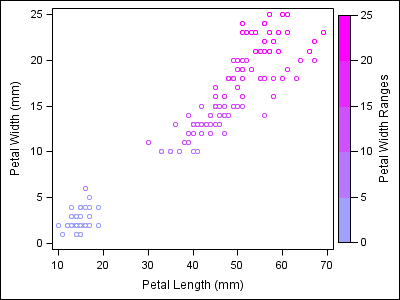 Dan Heath is a principal systems developer at SAS Institute. A SAS user for more than 28 years, Dan specializes in SAS/GRAPH software, ODS Graphics, and related graphing technologies. Dan has been a speaker at a number of regional and local users' group meetings, including SAS Global Forum, PharmaSUG, and WUSS. He received a BS degree in computer science from North Carolina State University.