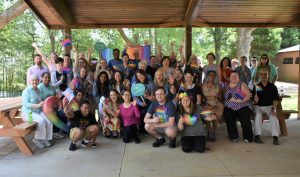 June is PRIDE month and there are lots of cool events at SAS and in the community that you can attend to celebrate and learn and have fun.  In this blog I am going to share some tips on being an ally-- not just in June, but all year round.

Let's start with defining what ally means.  Here is the definition I like (from Webster): "one that is associated with another as a helper: a person or group that provides assistance

and support in an ongoing effort, activity, or struggle... often used specifically of a person who is not a memeber of a marginalized or mistreated group but who expresses or gives support to that group."  Ally can be used as a noun or a verb, but today I want to think of it as a verb because the idea of "doing" is going to inspire our list of ways to be an ally.

Listen to as many voices of people we are trying to ally ourselves with as possible.  Every community is complicated and nuanced and diverse, even if they share a characteristic.  Without listening to as many experiences as we can, we succumb to the “Danger of the Single Story.”

2-  Learn about the power of language

I just taught a parenting seminar this week on sending your child off to college.  One way to ensure you don't shut down converstations about their romantic life is to ask "are you seeing anyone" rather than "do you have a boyfriend/girlfriend."  If your child is struggling with their sexual or gender identity, your word choice sends a powerful signal to them about your willingness to listen.  Think about your language and if there are words you use that are either derogatory towards a particular group or just not inclusive, work to learn new ways of saying things.

Think through how you are going to respond when you hear a derogatory comment or joke and then do it.  Here are some suggestions... "I grew up saying that word, too, but I know now that it is really hurtful to people I care about, so I have decided not to use it anymore."  "I am surprised to hear you say that because I think of you as a compassionate, caring person."

If someone tells you that you have said or done something hurtful, thank them for caring enough about you to give you that feedback, apologize, and act differently going forward.

5-  Show your support with more than just words

Reach out to someone different than you.   Attend a lecture, art exhibit, rally, discussion group with people whose voices aren't always heard.  Amplify those voices by sharing their words on social media or ensuring representation when you are forming a committee.

What are your tips for being an ally?

Lisa Allred comes to SAS with a long history of working with families throughout the lifespan. After receiving her undergraduate degree at Wake Forest Universtity and her Masters in Social Work from UNC-CH, her career began as a child therapist focusing on parenting, anxiety and trauma. She then moved into college counseling where she emphasized student wellness and balance.