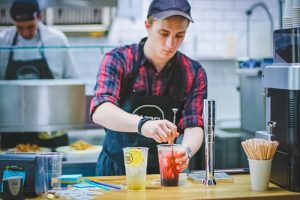 My colleague, Lisa, and I were comparing notes the other day. Both of us starting working in our teens (14 and 15 respectively) during the academic year as well as the summers. I worked at Sears in the drapery and bedspread department. I’ll never forget my first boss—Mr. Arnold. He did not suffer fools either in terms of his employees or the customers. I showed up on time (meaning 10 minutes early) and put in a full day’s work (meaning if I didn’t have anything to do, I needed to find something to do…and I better not wait for Mr. Arnold to tell me what that was). I learned what it meant to be reliable, how to be observant and take initiative, and what excellent customer service entailed. To top it off, all my workmates were at least 10 – 20 years older than me. Lessons for a lifetime!

According to Jeffrey Selingo, author of There is Life after College, the number of teens who have some sort of job while in school has dropped from nearly 40% in 1991 to less than 20% today. My 97-year-old father says kids are getting lazier. Not true says Derek Thompson. Just 7% are NEETs—young people who are “Neither in Education, Employment, or Training”.

American teens are occupied in some form or fashion. Mostly in educational pursuits. But there are additional reasons, according to Thompson, why less teens are working.

So, is it worth the effort to find one of those sought-after summer jobs? Short answer...YES! (Check out these 6 truths.) And if the summer job extends into the school year, will it take away from your student’s academic progress?  Selingo’s answer:

Typically, anything under 20 hours a week is safe bet that academics won’t suffer. Indeed, research has shown that students who are employed while in high school or college allocate their time more efficiently and are motivated to study harder in their classes so they can achieve a certain career goal.

Julie Lythcott-Haims, author of How to Raise an Adult, agrees. In her eight-item “A Different Kind of Checklist” based on her observations as Dean of Freshman Students at Stanford, number seven reads:

An eighteen-year-old must be able to earn and manage money. The crutch [that hinders them from standing up on their own two feet]: They don’t hold part-time jobs; they receive money from us for whatever they want or need; thus, kids don’t develop a sense of responsibility for completing job tasks, accountability to a boss who doesn’t inherently love them, or an appreciation for the cost of things and how to manage money. (p.82)

Recently, local therapist Denise Saunders, PhD did a podcast with me about supporting your young adults on the path to career satisfaction and success. One of her remarks bears repeating:

Post-secondary planning is often the first time teenagers get to make independent decisions based on their knowledge of themselves and opportunities available in the world around them.  When young people don’t have a good sense of themselves or engage in self-doubt, decisions of this magnitude may feel daunting. The solution is not to make the decision for them, even though in some cases it may feel like the most comfortable choice to them and to us.  Instead, helping them gain exposure to multiple experiences paid and unpaid during high school and post-secondary education or training can provide opportunities to enhance self-knowledge and occupational knowledge.  Both are important and necessary to effectively manage transitions such as these.

Convinced? Here are some ideas to get you started: