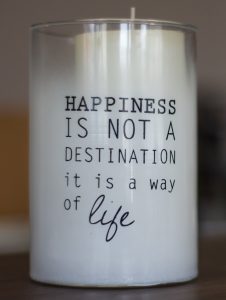 I recently read an article by a parent coach I admire about phrases she has used frequently over the years with her daughter. Here’s a snippet:

"My daughter mouthed the words as I began to say them, "Don’t decide how things are going to be later." She has heard this phrase from time-to-time–a mantra of sorts that effectively shifts her from deciding in the present how poorly she might do on a test next week, or how tough an opponent might be on the court a few days from now….The phrase has facilitated discussions about action steps that she might take now, instead of solely forecasting a future of doom and gloom.  I have also heard myself say on more than one occasion, "Thinking the worst doesn’t usually get you any closer to how you want things to be," knowing that a negative train of thought often serves to increase stress and immobilize positive action." –Kay Kimball Gruder

Sometimes when I was in a bad mood coming home from school, my mom would look at me and say, "Who licked the red off your candy?" I couldn’t help but smile in the midst of the unhappy drama of my life.

When I left for college (in the dark ages before e-mail and cell phones), my Dad would send a letter each week always signing off with the following sentiment: "Keep your nose to the grindstone, but don’t let it ruin your profile."

When my boys were growing up, I uttered the following phrase quite frequently when we found ourselves overwhelmed with activities and opportunities: "Less is more."

Now that my own children have grown into adults and the worries I have about and for them have become fewer but larger, I often glance at the index card taped to my bathroom mirror with a quote by Winston Churchill:

"When I look back on all these worries, I remember the story of the old man who said on his deathbed that he had had a lot of trouble in his life, most of which had never happened."

These sayings have provided humor and perspective when I needed it the most.

How about you?  Would you be willing to share some of your favorite sayings that have guided you along the way?