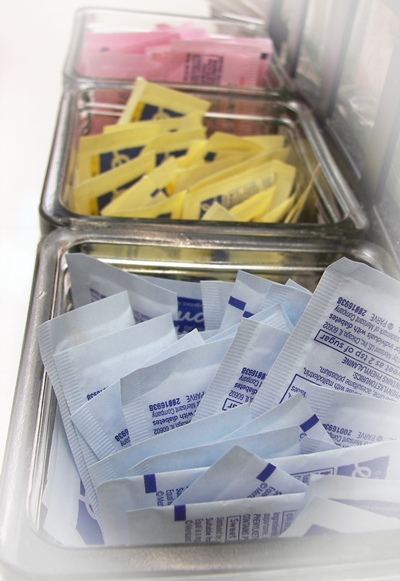 Artificial sweeteners have been a controversial topic since they came into the market decades ago. There has been an ongoing debate over the potential health benefits and risks of artificial sweeteners, which are among the most common food additives and are consumed by hundreds of millions of people around the globe.

While some past studies have found that they pose no health risks and might help people cut calories, other research has suggested that certain artificial sweeteners might actually increase hunger and sugar cravings, contribute to obesity, diabetes and other problems, including birth defects and cancer.

One particular study on Splenda found that not only may it disrupt your gut microbiome and increase your risk of intestinal permeability (leaky gut); it could also alter your body’s natural detox capabilities. Not good.

"These results indicate that non-caloric artificial sweeteners may exacerbate, rather than prevent, metabolic disorders such as glucose intolerance and diabetes," the researchers wrote. Now that’s something to pay attention to. Dr. Elinav, one of the researchers, believes that certain bacteria in the guts of those who developed glucose intolerance reacted to the chemical sweeteners by secreting substances that then provoked an inflammatory response similar to sugar overdose, promoting changes in the body’s ability to utilize sugar.

According to Dr. Elinav,"The results of our experiments highlight the importance of personalized medicine and nutrition to our overall health. Our relationship with our own individual mix of gut bacteria is a huge factor in determining how the food we eat affects us. Especially intriguing is the link between use of artificial sweeteners-through the bacteria in our guts-to a tendency to develop the very disorders they were designed to prevent; this calls for reassessment of today’s massive, unsupervised consumption of these substances."

We are all different. What works for one person doesn’t mean it’s going to work for another. The researchers are figuring out that our highly individualized gut biomes determine our responses to many things, including artificial sweeteners.

According to this study, some of us, and our bacteria, will respond poorly to artificial sweeteners. Some of us won’t notice a thing.

My recommendation is if you have digestive issues, glucose intolerance, or problems losing weight, then you may want to stay away from the artificial sweeteners just like you’re trying to limit your sugar intake.

If you want something sweet, stick with whole fruit, because the fiber and water in fruit make it more difficult to over-eat, while promoting healthy gut bacteria.

Whole Leaf Stevia has actually been used traditionally as a treatment for diabetes, and some studies indicate that it can have therapeutic effects in diabetic patients.

I would suggest trying to obtain stevia closest to its natural form, but that’s true for just about any food. Look for whole leaf stevia in liquid or powder (it should be green).

There is a lot of research out there around artificial sweeteners and how they affect our body. Many of them are done in mice or rats because it’s easier, and cheaper. Those results may or may not translate to us humans. Hopefully, in the future we will have more studies that look at artificial sweeteners in humans. Anybody interested in signing up for a study that will take years, and may lead to digestive problems, weight gain, and other side effects? Yep, I didn’t think so.

*Regardless of the source, it’s always best to minimize your intake of sweeteners.* 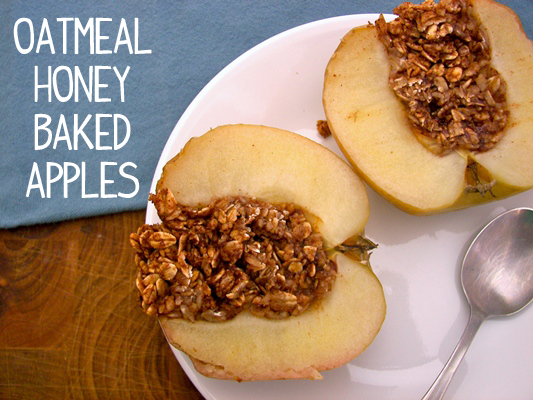 1. Pre-heat oven to 350°F with a rack in the lower-middle position.

2. Remove the core of the apples, cutting to within a half inch of the bottom of the apple and creating a well roughly ¾-inch wide. This is easy to do with an apple corer, but can also be done with a melon baller, grapefruit spoon, or a paring knife. 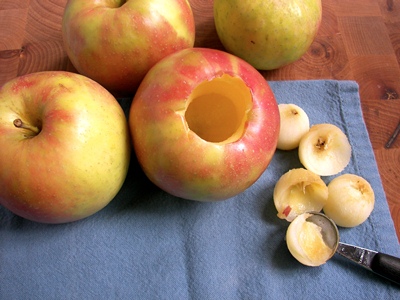 3. Mix honey, oats, cinnamon, nutmeg, cloves, and any optional extras in a bowl. Divide this mixture between the apples, packing the wells firmly.

4. Arrange apples in a baking dish (like an 8x8 Pyrex dish), and top each one with a pat of butter. Pour the water into the bottom of the dish and cover loosely with aluminum foil.

5. Bake for 20 minutes and remove foil. Continue baking uncovered until the apples are soft, an additional 20 to 30 minutes. You can test the apples by poking a paring knife through the oatmeal mixture and into the interior of the apple; it should slide into the apple easily with no resistance. The skin on the apples will also become wrinkled and soft by the end of cooking.

6. Leftovers will keep for up to a week and can be reheated in the microwave or eaten cold. 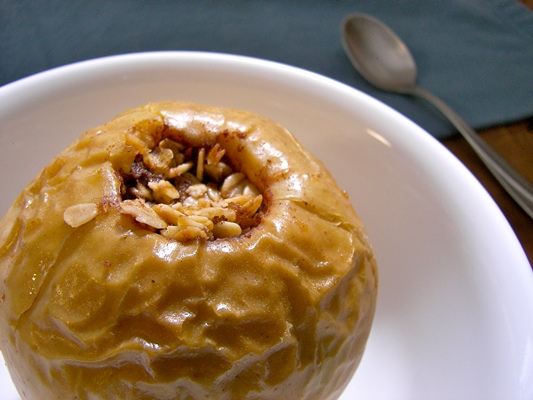