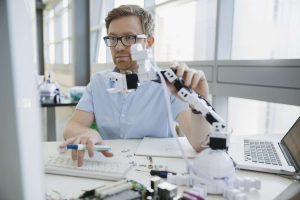 An oft-cited tenet of modernization is new technology replacing old. As a corollary, there is sometimes concern that this means displacing humans from activities where they were previously essential. Historically, this has perhaps been best exemplified by robots displacing humans as an essential element of the manufacturing process. Now in the age of artificial intelligence, automation trends are predicting that more jobs could soon be replaced by robots.

In modern corporate culture, data’s role in the robot uprising raises concerns that becoming a data-driven business means displacing humans as an essential element of the decision-making process. While data is often called the lifeblood of an organization, streaming data is literally coursing through the veins of machine learning models and algorithms. Some people fear this means too many decisions will be made by models and algorithms instead of humans. Since data feeds those models and algorithms, data essentially becomes a decision maker.

It’s understandable why that can make people uncomfortable. In a previous post, I asked: What happens if data is driving us to a destination that calls into question long-standing beliefs? A recent TDWI report revealed a key difference between using data to glean insights and analyzing data to drive decisions and actions. It is the collaboration among a group of key individuals throughout the organization who have well-defined roles, tasks and deliverables. From my perspective, one role that has to be well-defined and understood by everyone is that of data.

Data-driven businesses accept data is a decision maker. However, they also realize data-driven decision making does not mean that data is the only decision maker. People still play a pivotal role – but they have to embrace technology that helps them play their roles, including automation tools that reduce human intervention. Some such tools automate the model-building process since true data scientists and statisticians are often in short supply. But human oversight is still needed before the model’s data-driven insights should drive decisions and actions. Human oversight includes testing and validating models, and developing and maintaining the catalogs, glossaries and dictionaries needed to track data lineage and facilitate collaboration.

Collaboration is essential – but, as Charlie Chase noted, “The collaboration will be between humans and machines. Machines will automate the mundane, labor-intensive work and allow humans to work smarter to uncover insights and make faster real-time decisions.”

“Never before have digital tools been so responsive to us, nor we to our tools,” H. James Wilson and Paul R. Daugherty explained in their recent Harvard Business Review article. “Technology’s larger impact will be in complementing and augmenting human capabilities, not replacing them.” Their research discovered the organizations that achieve the most significant performance improvements are those where humans and machines work together to "enhance each other’s complementary strengths: the leadership, teamwork, creativity and social skills of the former, and the speed, scalability and quantitative capabilities of the latter. What comes naturally to people (making a joke, for example) can be tricky for machines, and what’s straightforward for machines (analyzing gigabytes of data) remains virtually impossible for humans. Business requires both kinds of capabilities.”