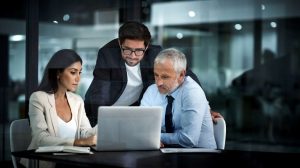 Data ownership has always been a thorny issue, but the era of big data is sprouting bigger thorns. Last century, ownership was like the data equivalent of “you break it, you buy it.” If you own data, you are responsible for it, and can be held accountable if something goes wrong with it (e.g., data quality issues). This meant data ownership usually fell into the bottomless well of the business versus IT debate, which came down to arguing over whether data ownership is equivalent to business process ownership or database management.

But then the big rallying cry of this century became: Data is a corporate asset collectively owned by the entire enterprise. In data-driven enterprises, everyone, regardless of their primary role or job function, must accept a shared responsibility for preventing data quality lapses, and for responding appropriately to mitigate the associated business risks when issues do occur. All the while, individuals must still be held accountable for the business process, database management, data stewardship, and many other data-related tasks within the organization.

With more traditional data, such as the master data describing customers involved in the transaction data describing purchases of the organization’s products and services, it somewhat makes sense that the organization claims ownership of this data on the basis of the direct relationship between them and their customers. While privacy debates were occasionally sparked by the data owned by companies not directly involved in relationships with consumers (e.g., Acxiom), big data has made ownership and privacy much bigger issues.

One of the challenges organizations face when integrating big data into their existing processes and programs is that big data brings in a lot of new data sources from outside the enterprise, making it more difficult for the organization to claim ownership of big data. Furthermore, data used to be something the public did not think about, let alone consider something owned by anyone. But nowadays with companies like Google and Facebook having built financial empires out of big data and mobile providers selling unlimited data plans, data is no longer an esoteric concept and data ownership has become a frequently debated topic.

In recent years, data privacy was at the center of major news stories ranging from governments spying on us to social networks experimenting on us, calling into question who owns all that data proliferating on the Internet and mobile web, generated, and often freely shared, by users via public clouds connected to mobile devices.

As Tamara Dull explained in her big data MOPS blog series, “This privacy issue is only getting bigger, especially as companies and government agencies get better at collecting, analyzing, and (sometimes) selling the data we’re freely sharing with them.” And, she later added: The big data privacy discussion is not just about behavioral advertising, as some would have you believe. Rather, it’s a much-needed, complex discussion about how we can balance privacy, security and safety in an increasingly transparent and dangerous world."