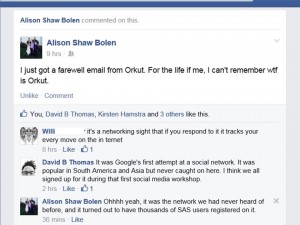 I got permission to use this screen-shot of the exchange.

One of my Facebook friends recently mused in a post about getting a farewell email from Orkut. And she couldn’t remember what Orkut was. To me – that tells the whole story of Orkut. And in her case, she is a well-recognized authority on social media - and not remembering Orkut doesn’t undermine her expertise in the least. The problem is clearly about Orkut. And then I got to thinking:

How in the world
could a company like Google
develop something like Orkut
and have it be a flop?

I am not doing a tit-for-tat comparison of features and functionality about Orkut vs. Facebook because it doesn’t matter – Facebook won the battle. But I do think there are at least three marketing strategy lessons to be learned here.

No, not your name – the name of your product / company. It helps if the name vaguely describes what it does, and it’s even better if it describes how it benefits the user. It’s not always possible to assign a name that way, but if so – do it. And find something easy to pronounce in multiple languages. This is especially true for consumer products because you want a name that’s easy to talk about and also to remember. Both Facebook and Twitter are great names – tweets are short and fast-paced like the twitter of birds chirping. Facebook is primarily about sharing pictures and events as if it were a virtual scrapbook and then exchanging comments about them. In both cases, the names fit and are descriptive.

Ironically, Google’s mastery of search algorithms have made it so internet search makes names more important than ever, especially if you are launching a new concept. Yes, digital tagging drives search, but names can also impact how your products show up in search results – especially if your name uses terms that your target market would naturally use. If you are free to choose how you name your new product, why would you NOT choose search-friendly terms? This is especially true if you do not have a large promotional budget - every letter and space in that name should be working for you.

This also applies to informational materials you develop. In our B2B environment, assets we use to engage our audience include papers, infographics, webcasts, blog posts and the like.  One of my soapboxes is that the title of an asset is critically important – it should be short (ideally 50-60 characters with spaces), as well as descriptive and compelling. And what’s compelling is heavily influenced by search – case in point is the title of this blog post, in which I’ve deliberately included “Facebook” and put it at the beginning of the title.

Orkut was named after its creator, Google product manager Orkut Büyükkökten, a gentleman of Turkish origin. And from what I can tell, multiple media references to Orkut as Google “dabbling in social media” makes it seem like the platform was not expected to be a substantial product for Google. But whatever the case, it’s not usually the best idea to name a product after yourself unless you’re a celebrity, but even then. No.  And time will tell if naming something after your child’s stuffed toy elephant (Hadoop) was a good call. I don’t think it matters because Hadoop is not a consumer good/service, but an open-source software framework for large-scale storage and processing. Let me put it this way, I doubt I’ll ever hear my mom say “Hadoop” (or need to), but I do hear her talk about “the Facebook,” “the Twitter,” or when something “goes viral.”

And then there’s the question of promotion – getting the word out. Any promotion is legitimate – you can pay for it, or you can “earn it” by generating “buzz.” So what appeared to happen with Facebook and Orkut? I’ve read some about how Orkut was developed and became popular in Brazil and India, but not much about how it was actually promoted.

Being free certainly helped Facebook take off, but all social networks are free, so it was more than that. Facebook was a cool and fun counterpoint to the teen and tween-heavy MySpace. And there was a certain cachet about Facebook being associated with the Harvard brand.  Then getting acceptance among students among the Ivy League and other highly selective schools fueled momentum because they wanted to connect among themselves and others wanted to connect with them. It grew organically to virtually every university in the United States and Canada, but it grew among a set of early adopters that the general public pays attention to because the traditional media regularly reports on what happens at universities.

At some point Facebook became more than just giving students the ability to extend their parties or razz each other virtually, and then it was a matter of scale. It certainly helped to have a Hollywood movie made about Facebook in 2010, as if it were a prelude to the now-famous Facebook initial public stock offering (IPO) in 2012. Who cared if the movie cast an unfavorable light on Mark Zuckerberg? It was an interesting story made all the more compelling because it appeared to be largely factual – like a Reality TV show without the script and plenty of deception, intrigue, a bit of underdog / class warfare and a Justin Timberlake element to it.

I remember in the years leading up to the now-famous Facebook IPO that analysts questioned its financial viability because they couldn’t seem to figure out how to generate revenues with the social network. Outwardly, it appeared that Facebook was tone-deaf to those warnings, but retrospect shows that they were probably focused on growth that would make them a force to be reckoned with. It’s as if to say, “We may have a clunky advertising model, but who else can deliver an audience of over a Billion.” Good point.

What matters about Facebook is that it is ubiquitous and nearly universal. It’s a great way to stay connected with all sorts of people, making it a terrific product. But even the best products don’t “sell themselves.” Every product needs promotion in order to reach its fullest potential, and promotion today needs to be every bit as complex and sophisticated as the customers we are trying to attract. Even the mighty Google has to promote its products – so was Orkut promoted? I can’t tell if it ever was, but its demise probably means it wasn’t promoted enough or not in the right ways because Facebook was not substantially different than Orkut and Orkut was a product in an already-established wildly successful technology titan.

In this case, I am talking about how much value your customer gets from your product. Your product has to be relevant and fulfill a real need or purpose, otherwise it will just be a fad or a distraction (or an utter flop). In the case of Facebook, Mark Zuckerberg figured out that the full value of the social network is not simply to provide the platform to be social, but to have virtually everyone using it and deriving some value from it. So his focus appeared to be on delivering something valuable to its users, which therefore created business value for advertisers to access a huge global audience on one platform.

Even before its IPO, which established a daily market value for Facebook, two statistics cited on the Wikipedia page for Facebook underscore its business value:

And then Microsoft bought an initial 1.6% stake in Facebook well before its IPO, which gave it legitimacy, as well as a stake in the ground for an investment value.

By any measure, those are all impressive valuation measures, but since Facebook is a free, opt-in service, the entirety of that business value rests on the customer value that Facebook users perceive in continuing to use the service. If users leave Facebook in droves, the whole house of cards would tumble. As for Orkut, I remember my Brazilian relatives and friends were all on Orkut a few years back, but then they stopped using it and started using Facebook. When I asked them why, they all said that it’s because the rest of the world was on Facebook and they wanted to connect to everyone else, too.

So those are three key lessons I see from what’s happened with Orkut. What do you think?