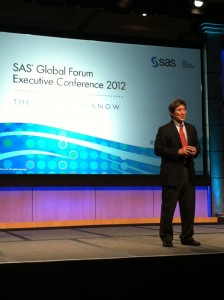 I had the distinct pleasure today to hear Guy Kawasaki deliver a keynote address at the SAS Global Forum Executive Conference 2012.  I thought of his engaging address as a nice guide for personal effectiveness, particularly in a professional realm.  And my main takeaway from yesterday's keynote address by Joe Theismann was that in an ever-changing world, the one constant I have 100% control of is my own attitude. As a result, the points that Guy Kawaski shared could not have come at a better time to help me grow as a marketer.

Guy Kawasaki is known as a best selling author, a former visionary at Apple and many other things, and I can also confirm that he's a very good speaker. His address described how to influence people's hearts, minds and actions, and he started out with the thought that there are 3 pillars to enchantment: likability, trustworthiness and quality.  And in order to achieve those 3 pillars, he offered 10 steps to follow:

1. Achieve likability.  A vivid example here is how Richard Branson started to polish Guy's shoes with his jacket upon learning that (until that point) that Guy had never flown Virgin Airlines.  The shoe-polishing incident changed that. So other than extreme shoe polishing, how can you achieve likability?

2.  Be trustworthy. The surest way to do this is to sincerely trust others first and you'll find that they will trust you in return.

4.  Tell a story.  Do that to launch your product, and make sure your story tells how it impacts a person's life.  The channels you use and the content in the story are both important.

8.  Use technology.  We live in a great time.  Social Media is fast, free and ubiquitous.

9.  Enchant your boss.  This is very important in any organization. Seriously.

10 Enchant down. You are in an organization and if you have people reporting to you, you depend on those folks to help achieve your collective success.

So, the bottom line to influence through enchantment, you should aim to have the quality of Apple, earn the trustworthiness of Zappos and achieve the likability of Richard Branson.  It's really that simple.  What do you think?