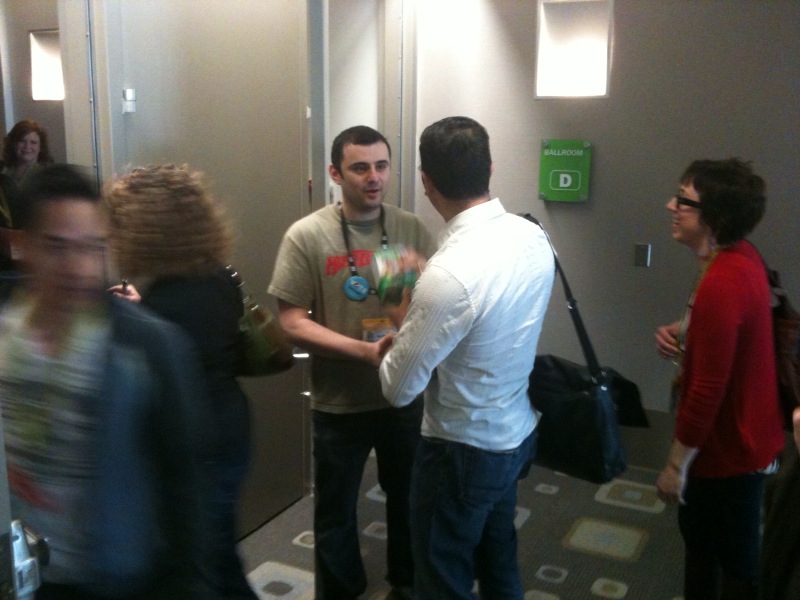 Gary welcoming people as they enter his keynote

Gary Vaynerchuk (@GaryVee) gave one of the most popular keynotes at SXSW. The auditorium was packed and there was a very warm and genuine vibe. Here are my notes from his talk.

Location-based apps are the big noise right now. Why would you want to check in everywhere you go? Because when you check in at a bar and they give you a free beer, you get it.

Every person in this room, whatever you do know, you'll eventually be in the customer service business.

Gary's attitude toward speaking and community is that if only one person shows up, that's one more than zero and we need to start adopting that attitude for companies.

Gary told a story of his brother at a Mexican restaurant being told they wouldn't get a table for 40 minutes. He took out his phone to text Gary that he'd be late. The hostess immediately found them a table, because she thought he was going to leave a bad review on Yelp or complain on Twitter. So if you don't get good service, whip out your phone with purpose.

Everybody's talking about scale. People ask Gary how he can scale his direct interaction in social media. His response, “I'm going to try.”

Why do companies want Twitter followers? Because they want to spam them.

The biggest problem I see with every startup, is everybody's trying to be a 19 year old dude. Everybody is trying to close so fast. It's amazing what the soft sell can do.

We all love our parents, because they loved us first, and I need companies to get that. All they care about is ROI and the stock price, and that's why we're losing. We live in a connected world and have awesome BS detectors. People need to start caring or they're going to lose.

I'm passionate about the “thank you” economy. I almost made more money betting people that Crush It would make the NYT bestseller list than I got from my advance. So many people told me the book would never sell because I give away too much content online. I knew it would, because of the thank you economy. You have to do good first. Now we all broadcast, and that's the lay of the land. If you don't start caring about customers, you're going to lose.

I want nobody to quit their job. I get this email ten times a day: “Read Crush It. I quit my job.” No no no no no! People have to pay their mortgage. Don't quit your job. Stop watching “Lost.” Stop playing Wii. Find some time on the back end to do the things you love.

It's never been practical before to open a new business while you had a full-time job, but the Internet makes that possible.

No matter what you do, you need to be in the content game.

Q: When do you know when to turn it off?

That's the big question. I'm driven by gratitude. I was born in Belarus. If my parents didn't leave that place I would have been 1) in jail, 2) killed or 3) one of those crazy Russian billionaires. At 33 percent I didn't like the odds. Every morning I wake up grateful. When you add a child to that and a wife you love, life is so good it's scary. It's very hard to turn it off. It's in me. I want to grind.

It's very difficult for me to give you the right answer. There is no one in this room more obsessed with hanging out with 90-year old people than me. I have conversations with people in their 80s and 90s, because they've played this game and lived it. Not one of them out of 100 people have said, “I wish I made more money.” They all said “I wish I'd spent more time with my family” and “I wish I didn't work in that factory. I hated it.”

They didn't have the out we do. Everyone at SXSW has the advantage of knowing about all these tools and strategies. You know the alternatives You have no excuse for not being happy.

An audience member is launching a service to tweet for small to medium-sized brands that don't get Twitter. She asked what Gary thought of the idea. He said, “I hate it.” People want to scale too much. You know how you help them? By one to one grinding. If they don't get it, “Go to their houses and punch them in the face.”

There's no selling people on this. Work with people who are curious and interested. They'll get there early and they'll win. You can't scale authenticity.

Analytics are scary at times. They're valuable and you need them, but sometimes people bail because they're Google Analytics numbers aren't what they want. You don't build a business in six months. Don't veer away from your core. If things aren't working, think about what you're trying to accomplish and work harder and smarter. And bring a towel.

The session ended with two rappers from New Jersey doing a live rap from the Q&A mikes. It's bound to be online in 30 seconds.