As you've probably heard, President Obama referred to rapper Kanye West as a "jackass" after West crashed the stage at the Video Music Awards and stole the mic from blah blah blah I don't care. Obama made the comment in a pre-interview conversation with CNBC's John Harwood, who understood the conversation to be off the record. But some ABC employees listening in on a shared fiber optic cable heard the remark and immediately tweeted it.

As a former journalist, I'm intrigued by the idea of ABC employees eavesdropping on a CNBC interview, but that's not my problem.

My first thought was, "This just reinforces the idea that in the modern communication age, nothing is off the record."

True, and I've learned the hard way never to commit anything to print, physical or electronic, that you wouldn't want distributed. Once, bored with constant use of the phrase "cost-effective" in a document I was writing, I wrote "cost-o-riffic" as a placeholder and private joke. I forgot to change it before I sent it out to 50 people for review. And that's just the story I'm willing to share. 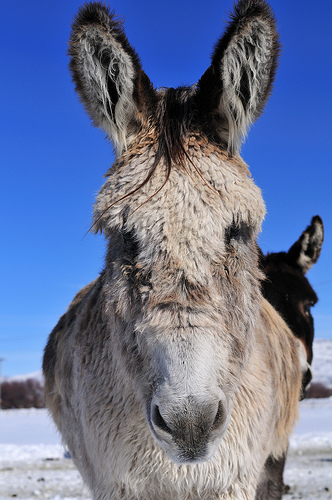 So yes, if you have something confidential or potentially inflammatory to communicate, say it in person or over the phone. But that's not the real point here.

The real point is this: Who really cares if the president thinks Kanye West is a jackass? Put on your non-partisan hat and ask yourself if it truly makes a difference to his ability to lead. Some are saying it's not "presidential," but presidents from both parties have made private remarks that have gotten picked up, like Reagan's joke that he had outlawed the Soviet Union and "the bombing begins in five minutes." That remark was exploited for political capital, just as Obama's has been and will be.

Do we really expect presidents to always be on point and on guard? Do we really think they abandon their personal thoughts and opinions with the Oath of Office?

And if your answer is "yes," how's that working out for you?

We've all made jokes or rash comments that we wanted to take back, or ones that sounded fine in context but awful on their own. Surely we don't believe that every word we speak stands on its own as the definitive representation of our character.

I spoke to a meeting of the Triangle chapter of the International Association of Business Communicators last week about our social media activities at SAS. One participant asked if we reviewed and copy edited all blog posts before they were posted. I said no. He asked if I was happy with the idea that material representing SAS might have a spelling or grammatical error.

Happy? No, of course not. I've been a stickler for spelling and grammar my whole life and have thrown cover letters in the trash because of a typo in the first line. But does that mean I want to hamstring our employees' ability to communicate by adding a new process that would take time and resources? No, because I truly don't think that a dangling participle or comma splice or typo in a blog post, taken as one element of the whole, would influence a customer's opinion of SAS or the decision to buy our software.

I've talked about this before in the context of the myth of corporate perfection. Companies aren't monolithic and faceless. They are collections of people. It is my fervent hope that the openness social media is promoting in both personal and business communication will help us all realize that an offhand remark or a mistake is just that and nothing more, unless of course it reveals some truly negative aspect of your character you're consciously trying to hide, like racism or sexism.

We all make mistakes. The more mistakes we make publicly, the more we will be able to accept them in others. Maybe, even at work, we'll start allowing one another to be human. Wouldn't that be more fun?
Photo by a4gpa