What is object detection?

Object detection, a subset of computer vision, is an automated method for locating interesting objects in an image with respect to the background. For example, Figure 1 shows two images with objects in the foreground. There is a bird in the left image, while there is a dog and a person in the right image.

Solving the object detection problem means placing a tight bounding box around these objects and associating the correct object category with each bounding box. Like other computer vision tasks, deep learning is the state-of-art method to perform object detection.

The convolutional neural network (CNN) shown in Figure 2 provides a solution to the regression and classification problems for our restricted object detection problem. Like other traditional computer vision tasks such as image recognition, key points detection, and semantic segmentation, our restricted object detection problem deals with a fixed number of targets. These targets can be fit, by modeling the targets as a fixed number of classification or regression problems.

Figure 2. Network architecture to detect one object in the image

As already noted, true object detection must be able to deal with N objects, where N varies from image to image. Unfortunately, the CNN shown in Figure 2 cannot solve this more general problem. It may be possible to use a variant of the CNN by hypothesizing many rectangle box locations and sizes and simply use the CNN for object classification. We often refer to these rectangle boxes as windows. To be comprehensive, the window hypotheses must cover all possible locations and sizes in the image. For each window size and location, a decision can be made on whether there is an object present, and if so, the category for the object. 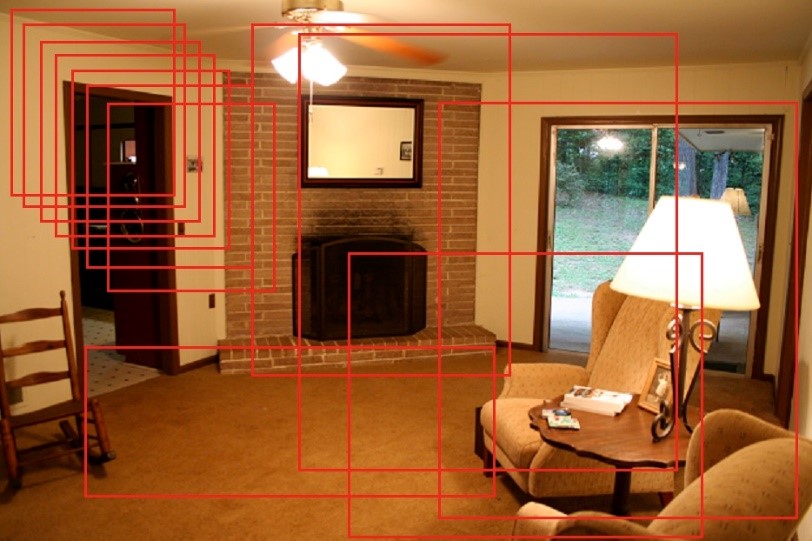 Figure 3. Some of the Possible Windows in Sliding Window Approach
Image source:
https://www.flickr.com/photos/nate/482673741/

Efficient methods to look for objects with windows

Can we do object detection in a smart way by only looking at some of the windows? The answer is yes. There are two approaches to find this subset of windows, which lead to two different categories of object detection algorithms.

YOLO (You Only Look Once) is the representative algorithm in single-stage object detection method. The steps it follows to detect objects are represented in Figure 4 and in the list below:

The preset number of bounding boxes with pre-defined shapes are called anchor boxes. They are obtained from the data by the K-means algorithm. The anchor box captures prior knowledge about object size and shape in the data set. Different anchors are designed to detect objects with different sizes and shapes. For example, in Figure 5, there are three anchors at one location. The red anchor box turns out to detect the person in the middle. In other words, the algorithm detects the object with the approximate size of this anchor box. The final prediction is usually different from the anchor location or size itself, an optimized offset obtained from the feature map of the image is added to the anchor location or size. 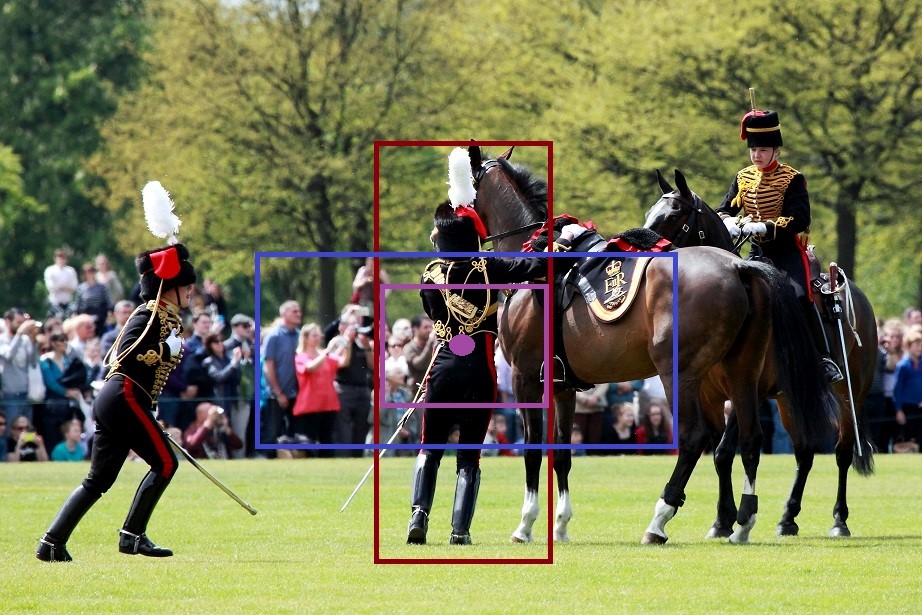 The architecture of the YOLO algorithm is shown in Figure 6. The detection layer contains many regression and classification optimizers, and the number is determined by the number of anchors.

Faster RCNN [1] is a two-stage object detection algorithm. Figure 7 illustrates the two stages in faster RCNN. Although “faster” is included in the algorithm name, that does not mean that it is faster than the one-stage method. The name is a historical artifact – it simply indicates that it is faster than it is previous versions, the original RCNN algorithm [7], and the Fast RCNN [8], by sharing the computation of feature extraction for each region of interest (RoI), and by introducing the deep learning-based region proposal network (RPN). 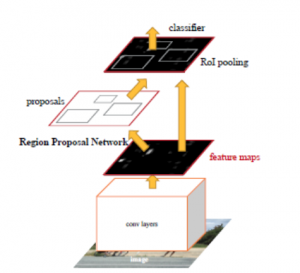 After using many CNN layers to extract feature maps, the region proposal network (RPN) outputs many windows that are highly likely to contain an object. The algorithm then retrieves the feature maps inside each window, resizes (or polls) them into fixed sizes (RoI pooling), and predicts the class probability and a more accurate bounding box for the object.

Object Detection is now supported in SAS deep learning. Details and examples are provided in the documentation for SAS Visual Data Mining and Machine Learning. The object detection algorithms supported currently are YOLOv1, and YOLOv2. Faster RCNN and Retina Network will be supported in the near future. Models developed on SAS Deep Learning can be easily deployed to SAS Event Stream Processing without worrying about the details of real-time processing. SAS Deep Learning also has a Keras-type Python interface, DLPy, which is an open source project. The source code and examples of DLPy are available on GitHub.

Object detection is a challenging computer vision task, primarily because the number of objects varies from image to image. The concept of an anchor box was invented to select sub windows to search for objects. Anchors may be obtained directly from the data, or strategically designed to cover most sizes and locations of possible windows.

One-stage object detection algorithms use anchors to detect the objects directly. Two-stage algorithms use anchors to first perform region proposal, and then determine the tight bounding boxes and object categories. For real-time applications, one-stage algorithms like YOLO tend to be the best approach. While lower in accuracy, the computational complexity of these algorithms is tractable given typical hardware constraints. If higher accuracy is the priority, two-stage methods are usually preferred. SAS Deep Learning is unique in that models created in the framework can be deployed to the ESP engine for real time processing without extra programming effort.