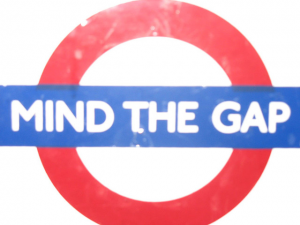 The US, UK and Canada could see debts and deficits fall if they close the tax gap.

During the week when everyone hanging onto their money until the last day files their taxes here in the U.S., I find it valuable to reflect on what won’t happen this week.  Based on studies from the IRS, an estimated $458 Billion WON’T be appropriately reported or paid.  This is known as the Tax Gap.  And it happens for a number of reasons.  Proper reporting but lack of payment might simply reflect economic circumstances.  Some of the under reporting might be attributable to errors.  The remainder reflects everything from a wanton disregard for the laws to outright fraud and underground economic activity.

Breaking things down helps explain this further.  The IRS study estimates that income from standard employment, reflected by W-2s from employers and with wage withholding throughout the year, is largely reported correctly, accounting for just 1% of the total gap.  However, beyond W-2s and withholdings, the gap between reported and actual income widens significantly.  While the IRS singles out self-employed individuals and farms, the underreporting group is potentially widening dramatically with the fall of standard employment and rise of everything from selling items through eBay or LetGo, renting property through AirBNB and VRBO, or driving for Uber or Lyft. 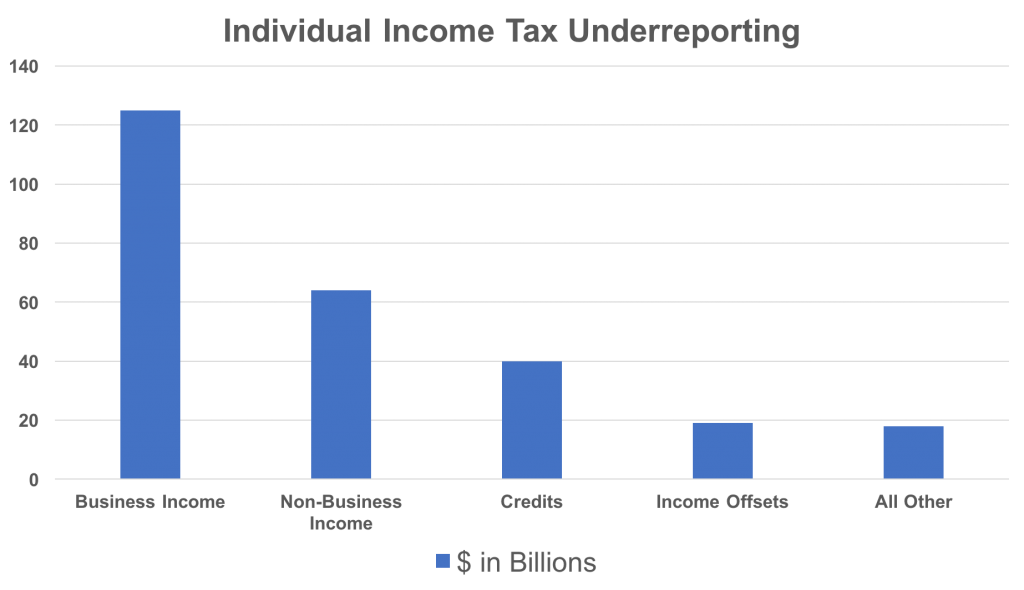 The HMRC, the national tax authority in the U.K., goes further in their studies, attributing a number of different levels of action or inaction leading to their estimated £34 Billion ($43.1 Billion USD) annual tax gap. Distinguishing many different levels of behavior, from tax avoidance and evasion to disputed legal interpretations may be cutting things too fine, but the attempt to understand causes is worth the effort, as detailed below. 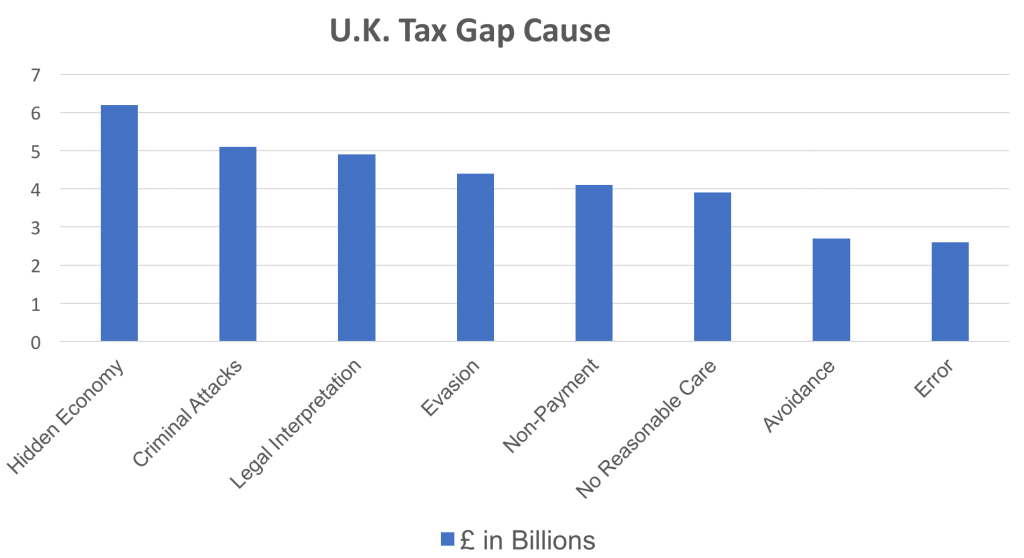 I recently found myself part of the conversation on the tax gap of our neighbors to the north in Canada.  Their national tax authority, Canada Revenue Agency, or CRA, hasn’t ever put out a full study of their tax gap.  The Conference Board of Canada engaged in a research project to try and put out some potential estimates [signup required], utilizing the methodologies of the IRS, HMRC and others.  The lowest (and unlikely) estimate came in at $8.9 Billion (CAD) annually, and potentially as high as $47.8 Billion ($35.8 Billion USD). With a budget deficit estimated at $29.4 Billion looming this year, it’s not surprising that elected officials are pointing to this issue as one place to look.

At the end of the day, why do these estimates matter?  Are they just there to anger the public at the errors of government, and yet more failures?  No.  It’s critical to research a problem even when you can’t come up with an exact answer, as it shows the magnitude of the problem.  Investment doesn’t happen when problems are small.  And these days, the flood of identity thefts  to gain fake refunds are all too distracting.  Cutting staffing at the IRS, the HMRC and many other tax authorities hurts that critical mission.  The need to work not just harder, but smarter, leveraging analytics to identify the problems and tackle them quickly.

Unlike Canada, our tax gap isn’t going to solve our budget woes.  Even if every dollar were collected, we wouldn’t have run a surplus in most recent years.  But, the deficit stood at $438 Billion for 2015, less than the tax gap if estimates from the previous study held true.  And an extra $4.58 Trillion coming in over a decade would have made a huge difference.

As to the why of it all?  Don’t we all, from the average Joe to the president, prefer to keep a dollar in our own pockets rather than give it away when we don’t understand what we are “buying” for it? That drives many to bend or break the law in order to keep some or all of those dollars to themselves.  A study in the last year drove this point home for me.  More than one in four (27%) Americans that responded indicated they would sell their workplace passwords.  Nearly half would do it for less than $1,000, and some as low as $100.  Maybe it isn’t so much a tax gap as an honesty gap.  And I don’t expect the gap to narrow any time soon. So, as the British would say “Mind the Gap”.