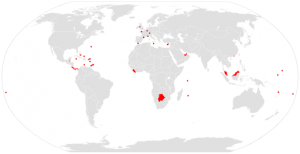 Helpful map of tax havens. You too can contribute to the underground economy!

Welcome to the dreaded week when procrastinators embrace their fates as responsible taxpayers. While you and I may be paying our taxes, to no surprise, as much as $2 trillion in the underground economy will go unreported this year in the U.S.  While that number may seem shocking, and the percentage is higher than some countries, it's still low compared to countries like Greece, Italy and Romania, where 30-48% of all business is part of the underground economy.  No wonder Greece is failing at yet another bailout.

It's one thing to let economists, even ones that study this on an ongoing basis, weigh in on the problem of the underground economy.  However, the IRS themselves admit that the "tax gap" is at least $450 billion and only 83.1% of taxes owed are reported and paid.  Or at least was, the last time they reported on it in 2012.  I can't wait to see how much it's grown by the time they update it early next year.  Stay tuned!

Okay, so it's one thing to talk about this in big numbers, another to bring it home.  What the heck is this underground economy anyway?  The answer is many different things.  It ranges from a construction company that does part of its business through official bids and payments, but also does "side projects" with cash payment for a significant discount, to individuals working a second (or first) job for cash "under the table" with nothing reported.  It's restaurants that use "zappers" to delete some of their credit card transactions, to people that rent out houses or rooms on AirBNB, HomeAway and VRBO and don't report it as income.  But it's not just little people and small businesses playing these games.  It's just that the big boys play it differently - through methods like shell companies and offshore tax havens that range between dodgy and outright criminal.  In recent weeks, that was pushed into the limelight as the "Panama Papers" were released.  Fallout from that has already taken down Iceland's Prime Minister.

All of this avoids not only the federal taxes, but state income and sales tax as well.  That doesn't just hurt some big government that might be thousands of miles away and wasting your money, but hits home very directly.  The school your children goes to becomes underfunded, cuts teachers and hurts education and the future.  The bridges around the state are in severe disrepair, crumbling, and sometimes just falling into the river.

Why is this a significant and growing issue?  Well, part of it comes back to a sense of right and wrong within a given country.  This comes back to that study I mentioned earlier that showed how badly Greece is doing.  Countries in northern Europe tend to rank the highest in this area - think Finland, Sweden and Norway.  A high sense of community and social responsibility equals a low rate of fraud, tax evasion and underground economy.  Now think for a moment.  How many people do you know that shave a little off their taxes?  If not now, in the past.  The answer is telling.  Another great example is a recent study that showed 1 in 5 employees worldwide would sell their work passwords to a third party. The U.S. fared well below average in that respect, with a full 27% willing to do so.

What can be done about this, outside of trying to teach morality in school?  Start using government and external data wisely.  Bring together sets of information that data aggregators like TransUnion have, along with information from utilities, government social programs, licenses and taxing agencies.  Then, layer strong analytics on top of it.  Start drilling down from that $2 trillion in high level economic activity that's missing and begin finding the gaps.  Belgium took this approach to help deal with fraud in their version of a sales tax, known as value added tax, or VAT, and eliminated 98% of the problem.  The HMRC, an equivalent to the IRS in the UK that handles income and sales (VAT) tax also undertook similar steps.  The problem is real, quantified and growing.  Instead of saying "Hey Brother, can you spare $2 trillion", let's go find it and collect it.

Care to join the conversation? Reply to this blog directly, or reach out on Twitter @carlhammersburg