Because it is near the end of the year, I thought a blog about "Summarizing" data might be in order.

For these examples, I am going to use a simulated data set called Drug_Study, containing some categorical and numerical variables. For those interested readers, the SAS code that I used to generate the data set Drug_Study is shown below. (Please refer to two earlier blogs that describe how to create simulated data sets.)

The first nine observations from this data set are shown below. 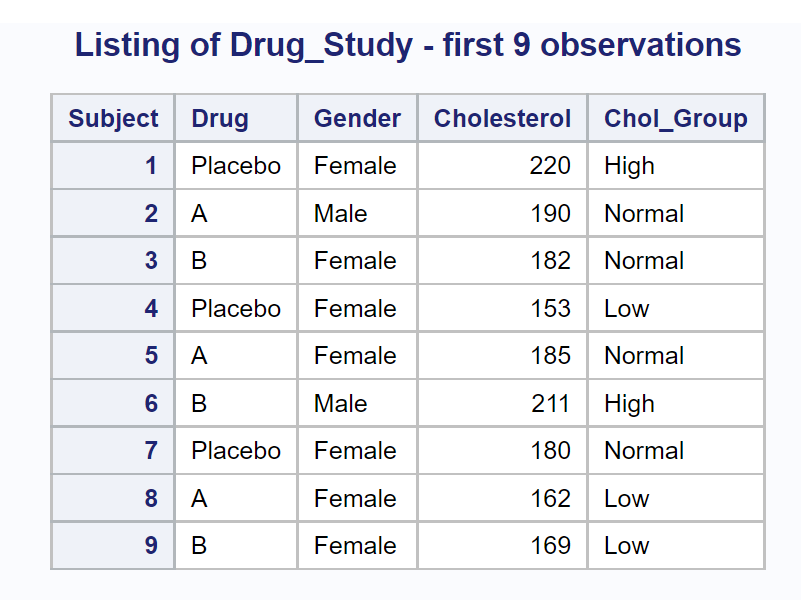 Let's start out­ with the most basic summarization—computing statistics for all numeric variables for the entire data set. You can write a program as simple as:

However, this program will compute default statistics for every numeric variable in the data set (including Subject). You will probably want to include PROC MEANS options to select what statistics you want and a VAR statement to list the variables that you want to summarize. Here is an example:

The procedure options selected here are some of my favorites. This is what they represent:

You can tell this is simulated (fake) data because there are no missing values. This would be very unusual in a real-life situation.

Most researchers would like to break down the two variables of interest (HR and Cholesterol) by some of the classification variables, such as Gender and Drug. You use a CLASS statement to do this. Let's start out by requesting statistics on HR and Cholesterol, broken down by Drug.

You could repeat this program, substituting Gender instead of Drug as the CLASS variable, yielding the following:

Finally, you can include a CLASS statement, listing those two class variables. The program, modified to show statistics broken down by Drug and Gender is shown next, followed by the output.

It is tedious having to run PROC MEANS four times to produce all of the outputs shown thus far. Instead, you can use the two CLASS variables and add the PROC MEANS option PRINTALLTYPES when you run the program. It looks like this:

In one run, you now see the two variables, HR and Cholesterol, for all combinations of the class variables as shown below. All of the programs used in this blog were run using SAS OnDemand for Academics using the SAS Studio editor. You could have also produced all of the outputs using built-in SAS Studio tasks. You can read more about how to do this in my book A Gentle Introduction to Statistics Using SAS Studio in the Cloud.

As always, comments and/or corrections are welcome. 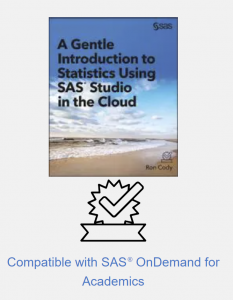