Interestingly enough, paperclips have their own day of honor. On May 29th, we celebrate #NationalPaperclipDay! That well-known piece of curved wire deserves attention for keeping our papers together and helping us stay organized. Do you remember who else deserved the same attention? Clippit – the infamous Microsoft Office assistant, popularly known as ‘Clippy’.

We saw the last of Clippy in 2004 before it was removed completely from Office 2007 after constant negative criticism. By then, most users considered it useless and decided to turn it off completely, despite the fact that it was supposed to help them perform certain tasks faster. Clippy was a conversational agent, like a chatbot, launched a decade before Apple’s Siri. The cartoonish paperclip-with-eyes resting on a yellow loose-leaf paper bed would pop up to offer assistance every time you opened a Microsoft Office program. Today, people seem to love AI. But a decade ago, why did everyone hate Clippy?

Why was Clippy such a failure?

One of the problems with Clippy was the terrible user experience. Clippy stopped to ask users if they needed help but in doing so would suspend their operations altogether. This was great for first timers, getting to know Clippy, goofing around and training themselves to use the agent. However, later on, mandatory conversations became frustrating. Second, Clippy was designed as a male agent. Clippy was born in a meeting room full of male employees working at Microsoft. The facial features resemble those of a male cartoon or at least that is what women in the testing focus group observed. In a farewell note for Clippy, the company addressed Clippy as ‘he’ affirming his gender. Some women even said that Clippy’s gaze created discomfort while they tried to do their tasks.

Rather than using Natural Language Processing (NLP), Clippy’s actions were invoked by Bayesian algorithms that estimated the probability of a user wanting help based on specific actions. Clippy’s answers were rule based and templated from Microsoft’s knowledge base. Clippy seemed like the agent you would use when you were stuck on a problem, but the fact that he kept appearing on the screen in random situations added negativity to users’ actions. In total, Clippy violated design principles, social norms and process workflows.

What lessons did Clippy teach us?

We can learn from Clippy. The renewed interest in conversational agents in the tech industry often overlooks the aspects that affect efficient communication, resulting in failures. It is important to learn lessons from the past and design interfaces and algorithms that tackle the needs of humans rather than hyping the capabilities of artificial intelligence.

At SAS, we are working to deliver a natural language interaction (NLI) service that converts keyed or spoken natural language text into application-specific, executable code; and using apps like Q –genderless AI voice for virtual assistants. We’re developing different ways to incorporate chatbots into business dashboards or analytics platforms. These capabilities have the potential to expand the audience for analytics results and attract new and less technical users.

The use of chatbots is exponentially growing and all kinds of organizations are starting to see the exciting possibilities combining chatbots with AI analytics. Clippy was a trailblazer of sorts but has come to represent what to avoid when designing AI. At SAS we are focused on augmenting the human experience and that it is the customer who needs to be at the center, not the technology.

Interested in seeing what SAS is doing with Natural Language Processing? Check out SAS Visual Text Analytics and try it for free. We also have a brand new SAS Book hot off the press focusing on information extraction models for unstructured text / language data: SAS® Text Analytics for Business Applications: Concept Rules for Information Extraction Models. We even have a free chapter for you to take a peek! 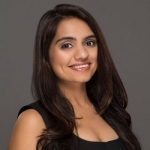 Nupoor Jalindre is a Graduate Research Assistant at SAS. She works with the Document Design and Related Resources teams and helps them with user research. She is a doctoral student at NC State University’s Communication, Rhetoric & Digital Media Program. Her research focuses on Technical Communication, Usability Analysis, Data Analysis, and Rhetorical studies. She has a background in Computer Engineering and has earned an MS in Technical Communication from NC State University as well. She is interested in exploring the field of human-computer Interaction and the role it plays in artificial intelligence and user behavior studies.