ln SAS Viya, deployments identities are managed by the environments configured identity provider. In Visual SAS Viya deployments the identity provider must be an LDAP (Lightweight Directory Access Protocol)  server. Initial setup of a SAS Viya Deployment requires configuration to support reading the identity information (users and groups) from LDAP. SAS Viya 3.3 adds support for multi-tenancy which has implications for the way users and groups must be stored in LDAP. For the SAS Administrator, this means at least a rudimentary understanding of LDAP is required. In this blog post, I will review some key LDAP basics for the SAS Viya administrator.

A basic understanding of LDAP  ensures SAS Viya administrators can speak the same language as the LDAP administrator.

LDAP is a lightweight protocol for accessing directory servers. A directory server is a hierarchical object orientated database. An LDAP server can be used to organize anything. One of the most common uses is as an identity management system, to organize user and group membership.

LDAP directories are organized in a tree manner: 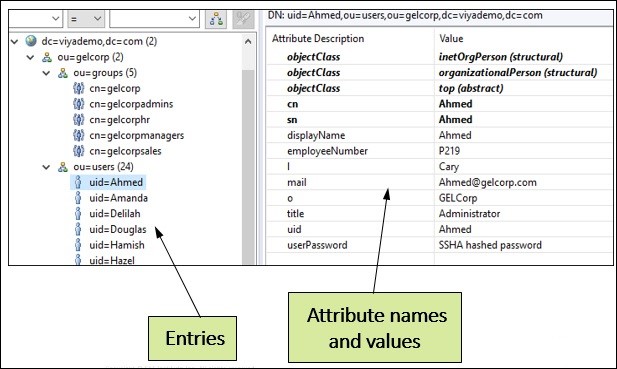 Below is an entry for a user Henrik. It has common attributes like: 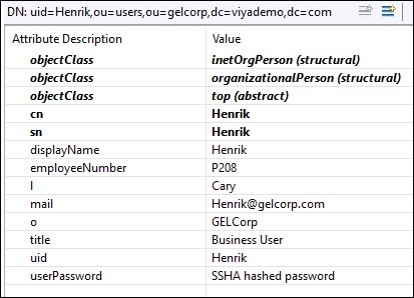 The attribute value pairs are the details of the entry.

Like any other database LDAP can be queried and it has its own particular syntax for defining queries. LDAP queries are boolean expressions in the format

uid = sasgnn
Attribute can be any valid LDAP attribute (e.g name, uid, city etc.) and value is the value that you wish to search for.  The usual operators are available, including:

Using LDAP filters, you can link two or more Boolean expressions together using the “filter choices” and/or. Unusually, the LDAP “filter choices” are always placed in front of the expressions. The search criteria must be put in parentheses and then the whole term has to be bracketed one more time. Here are some examples of LDAP queries that may make the syntax easier to follow:

Why do I need to know this?

How will you apply this LDAP knowledge in SAS Viya? To enable SAS Viya to access your identity provider, you must update the SAS Identities service configuration. As an administrator, the most common items to change are:

There is a separate BaseDN and ObjectFilter for users and for groups.

To return users and groups to SASVIYA from our example LDAP server we would set:

This would tell SASVIYA to begin its search for users and groups at those locations in the tree.

The object filter will then determine what entries are returned for users and groups from a search of the LDAP tree starting at the BaseDN. For example:

There are a lot of LDAP clients available that will allow you to connect to an LDAP server and view, query, edit and update LDAP trees and their entries. In addition, the ldif file format is a text file format that includes data and commands that provide a simple way to communicate with a directory so as to read, write, rename, and delete entries.

This has been a high-level overview of LDAP. Here are some additional sources of information that may help.