Every year in early October, the eyes of the world turn to Sweden and Norway, where the Nobel Prize winners are announced to the world. The Nobel Prize is considered the world's most prestigious award. Since 1901, the Prize has been presented to individuals and organizations that have made significant achievements in the fields of physics, chemistry, physiology or medicine, world peace and literature in each year (there were several exceptions during war years). In 1968, Sveriges Riksbank established the Sveriges Riksbank Prize in Economic Sciences in memory of Alfred Nobel, founder of the Nobel Prize. Today, individuals or organizations who are awarded Nobel Prizes and the Prize in Economic Sciences are called Nobel Laureates.

So far, more than 900 Nobel Laureates have been awarded. In this post, I wanted to learn a little more about these impressive individuals. Where were these Nobel Laureates from? Why do they get awarded? Is there any common characteristics you’ll find in these Laureates? Below you’ll find a preliminary analysis of Nobel Laureates using SAS Visual Analytics.

The analysis is based on data from List_of_Nobel_laureates, List of Nobel laureates by university affiliation and Nobel Laureates datasets at Kaggle, which definitely has some missing and inconsistent values. I have cleaned the data to correct for some obvious inconsistency as possible for my analysis.

How many Nobel Laureates have there been so far?

Recently, 12 new Nobel Laureates were awarded by the 2017 Nobel Prizes and Prize in Economic Sciences, and that makes 923 Laureates in total since the first Nobel Prize in 1901. Some Laureates share one prize, so we see more shared Laureates total in below table. While we see 27 organization winners of the Peace prize, most Laureates are individual winners. 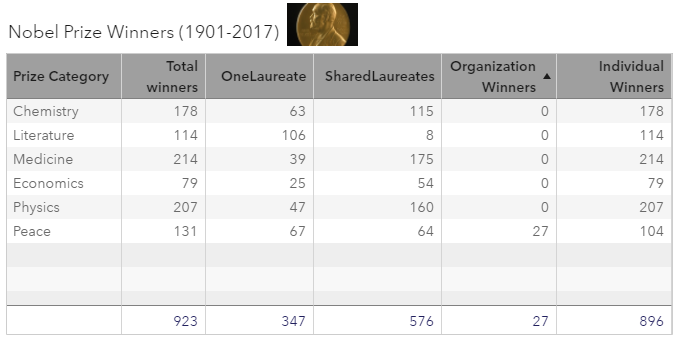 The chart below shows the overall trend of annual total Nobel Laureates is increasing year-over-year, as more and more winners are sharing the Prize. The purple circle on the plot indicates that there are shared winners in that year. The average number of winners is about eight each year. Yet there was only one winner in 1916 for the Literature Prize. The most winners came in 2001, with 15 Laureates sharing the prizes. I also note from the chart that during the First World War, there were very few Nobel Prizes awarded, and during the Second World War, there were none.

Moreover, we know that most Nobel Laureates are awarded one Nobel Prize, yet I learned from childhood that the female scientist Marie Curie received two Nobel Prizes. If you search the datasets for winners awarded more than one Prize, you’ll find four scientists accomplished this feat. They are: Marie Curie, Linus Pauling, John Bardeen and Frederick Sanger.

The answer is YES, per the research by Prof. Andrew Oswald from University of Warwick. Winning a Nobel prize adds about 1.5 years to the lifespan of Nobel Laureates compared to those who were merely nominated. Of course, it is not because of the monetary benefits that come with the Nobel Prize, but because of ‘the deep links between mind and body’, and that ‘happiness’ may make people live longer, which makes sense to me.

Since I don’t have the data of Nobel Prize nominees, let’s only test the lifespan of the Nobel Laureates and the ages they got awarded. The average life age of all Nobel Laureates is nearly 80, much older than the global average life expectancy of 71.4 years-old (according to World Health Organization 2015). Digging a bit more, we see Martin Luther King is the Nobel laureate (Peace, 1964) who died at youngest age. He was assassinated at 39 years old. Laureates who lived longest are Rita Levi-Montalcini (Medicine, 1986) and Ronald H. Coase (Economics, 1991), who both lived to 103 years old. You may also notice that the distribution of the Laureates’ lifespan is left skewed, the Nobel Prize winners certainly live longer than most. 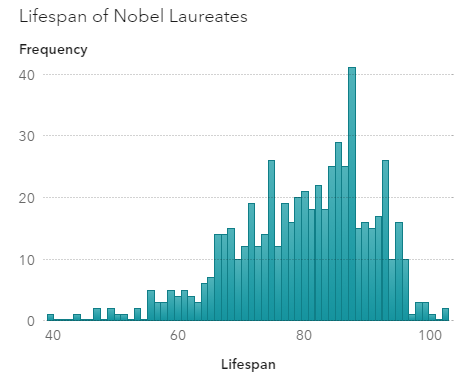 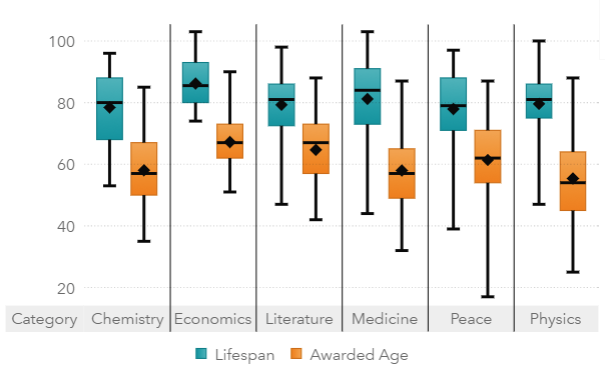 In addition, something more worth noting:

The chart below is created in SAS Visual Analytics and shows the awarded ages of all individual Nobel Laureates in different prize categories. The reference line is the average awarded age of 59. It is very easy to note that no Nobel Prize was awarded during 1940-1943 due to the Second World War. 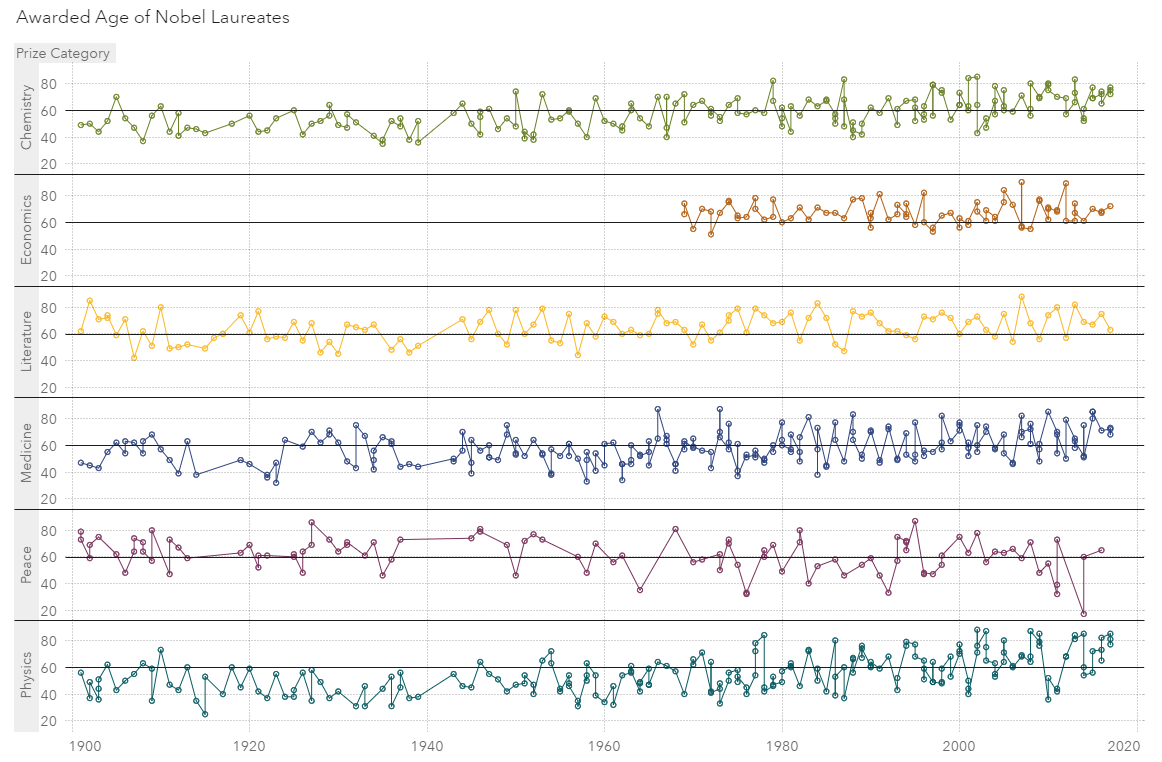 From which universities have Nobel Laureates graduated?

Next, let’s look at the educational background of Nobel Laureates. The left chart below obviously shows that much more Nobel winners hold Doctorate degrees than those of Bachelor or Master degrees. If we see the chart for Literature and Peace categories on the right, the difference is not that big. From the data, we know that the educational background of Nobel Laureates in Physics, Chemistry, Medicine and Economics categories (I call these four categories the scientific categories for easier description later) has the higher percentage of doctorate than that of winners in the Literature and Peace categories. 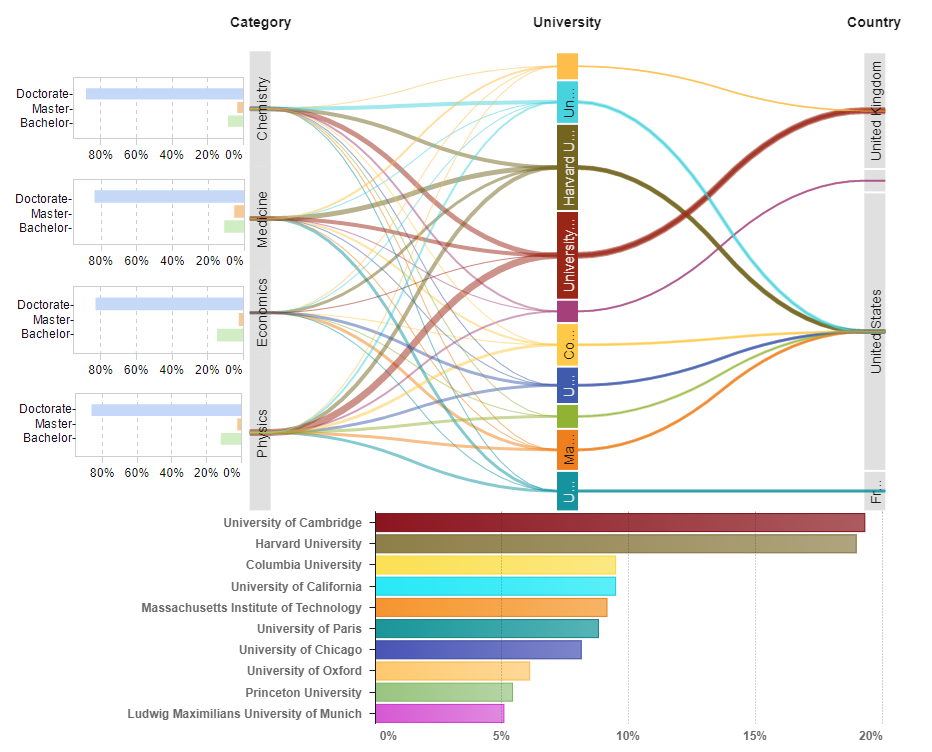 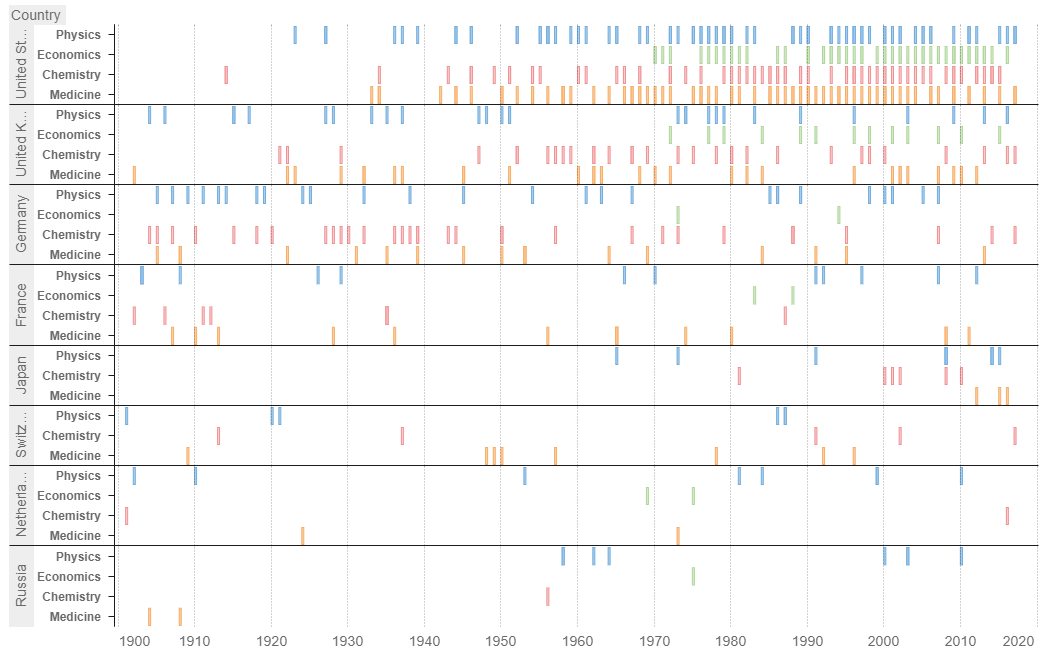 Why do the Nobel Laureates get awarded?

Since it’s not easy to seek evidence in the datasets that Nobel Laureates are awarded by fulfilling Alfred’s will, what I do is to use SAS Visual Analytics text topics analysis performing some preliminary text analysis of the ‘Motivation’ field in the dataset for a validation to some extent. The ‘Motivation’ is given by ‘nobelprize.org’ for why the Laureate gets awarded. The analysis shows that the most frequently mentioned word is ‘discovery’, while the most 5 frequently appeared words include ‘work’, ‘development’, ‘contribution’, and ‘theory’. And from the topics analysis result, the top 10 topics are about ‘discovery’, ‘human”, “structure”, “economic”,” technique”, etc., which are reflecting Alfred Nobel‘s will in establishing the Prize. Moreover, the sentimental analysis result shows that the statements in the ‘Motivation’ field are mainly neutral (being ‘objective’), even though there are few positive and negative sentimental statements. 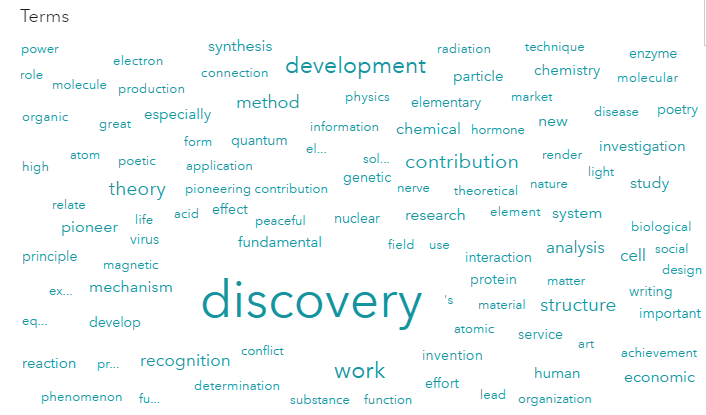 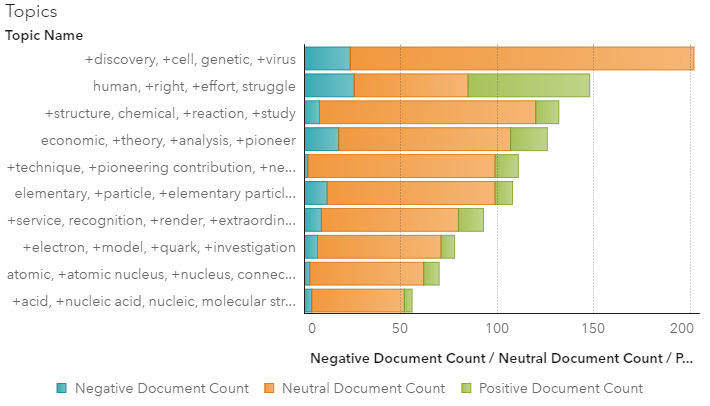 I hope you’ve found this analysis of Nobel Laureates data interesting. I believe there are still many other perspectives you can analyze to get insights. Is there anything interesting you see?