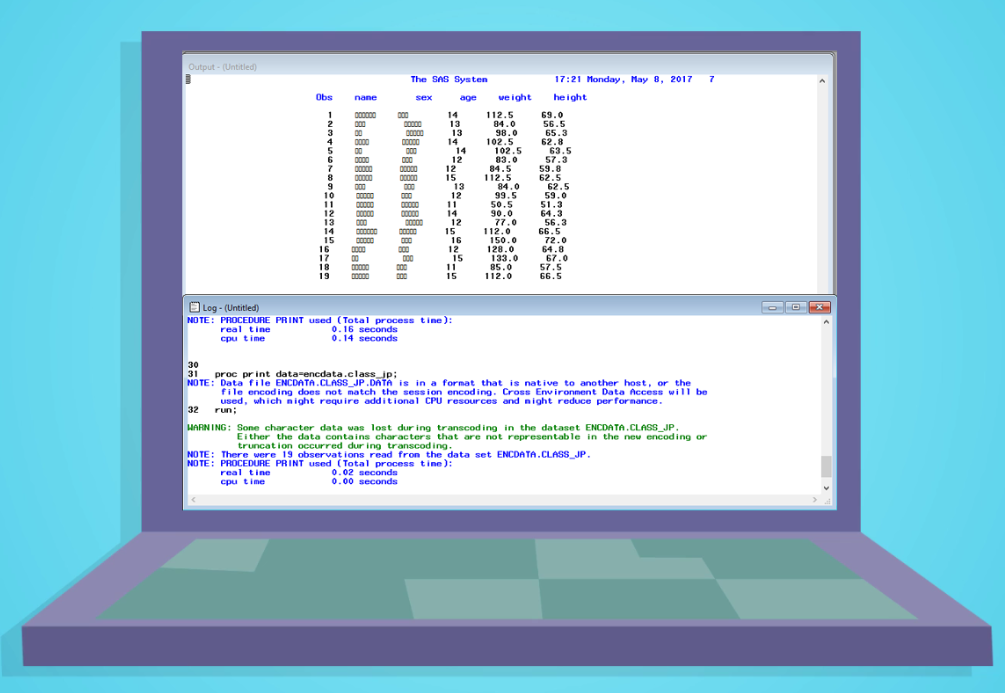 People are not always exactly sure what this warning means nor what to do about it. No worries! This blog provides background information about why this warning occurs and offers resources that can help you understand and resolve any encoding or truncation issues that are the source of the warning above.

Unicode is a multibyte character set that was created to support all languages. It includes all characters from most modern written languages and historic scripts, even hieroglyphs and cuneiform. UTF-8 is one of the more common encoding forms of the Unicode standard, and this encoding is recommended as the SAS session encoding for multilingual environments if your data sources contain characters from many regions. Each character can be up to four bytes in UTF-8. UTF-8 is the SAS session encoding for SAS® Viya™. Clients such as SAS Studio and SAS Visual Analytics typically execute statements in a server environment that run the UTF-8 encoding.

Now, let's look at how SAS handles data from different encodings along with two causes of the warning shown earlier.

Starting in SAS®9, SAS data sets store an encoding indicator in the descriptor portion. If the encoding value of the file differs from the encoding of the currently executing SAS session, the Cross Environment Data Access (CEDA) engine is invoked when SAS reads the data set. CEDA transcodes the data, by default. Transcoding is the process of converting the contents of SAS files from one encoding to another, and this process is necessary in order to read data from around the world.

When transcoding occurs, you receive an informational note about the use of CEDA. In addition, you might see the warning (shown above) in your SAS log.

The transcoding warning is issued when you have values for character variables that have either of the following characteristics: 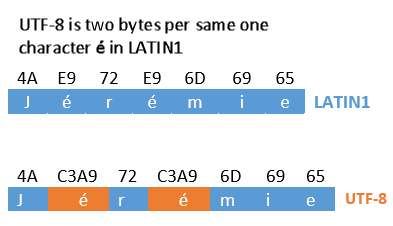 If you use a procedure (for example, the PRINT or REPORT procedures), the procedure runs to completion. The variable is truncated if the additional bytes cause the value to exceed the length of the column. Alternatively, if a character from the data set does not also exist in the target encoding or if it occupies a different code point (after transcoding), the column might be blank or another character might be substituted for the original character. The procedure generates the transcoding warning.

If you have an output data set open, SAS transcodes the character data and stops writing observations to the file at the point it encounters the problematic characters. This behavior can result in either fewer observations than expected or a data set with zero observations. When this happens, SAS generates an error message instead of a warning. This error message contains the same content as the warning message.

Before you attempt to resolve the transcoding error or warning, it is helpful to understand a bit about encodings and how to handle multilingual SAS data. To help you in this endeavor, SAS Technical Support worked with Education and Training to create a new, short (12 minutes) video to help you quickly troubleshoot and resolve the most common reasons for the transcoding error or warning.

Click the image below to access the video. (Note: You will be prompted to create a SAS profile if you do not have one already.) 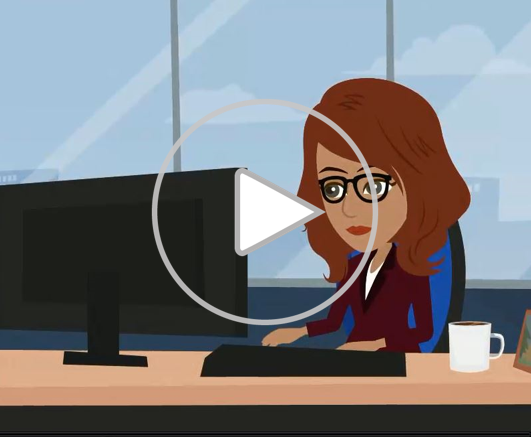 If you want to practice the techniques in this video, you can download the data sets that are used in the video here.

This video is based on solutions that have helped customers who called SAS Technical Support for assistance. The video offers these solutions in a visual format that is easy to follow. In addition to showing you how to launch SAS in different encodings to resolve the error, the video also introduces the Character Variable Padding (CVP) engine (Read-only) for processing SAS data files that contain multilingual data.

This video is one of a number of resources available to help you. The next section lists several tips that might help prevent or resolve transcoding warnings or errors.

Helpful Tips from the Field

The following tips have been tested and used in the field, and you might find them helpful when you work with multilingual data. The first two tips are usage tips; the others are programming tips.

WARNING 30-12: SAS option ENCODING is valid only at startup of the SAS System. The SAS option is ignored.

To customize the title bar of the main SAS window.

2.  Under Additional Languages, select the shortcut for the session encoding that you want. For example, the following image shows that SAS 9.4 (Unicode Support) is selected

3.  Right-click the shortcut and select Properties. This opens the properties dialog box for that shortcut.

4. On the Shortcut tab, place your cursor at the end of the current string in the Target text box. If it is not already listed in the box, enter the location of the configuration file that you want to use by using the –CONFIG option followed by the –AWSTITLE option.

Then include in quotation marks the text that you want to see in the main SAS window, as shown in the following example:

The entire line should look similar to the following, only it will appear as one long string:

The following display shows the –AWSTITLE option added to the Target field of the SAS 9.4 (Unicode Support) Properties dialog box: 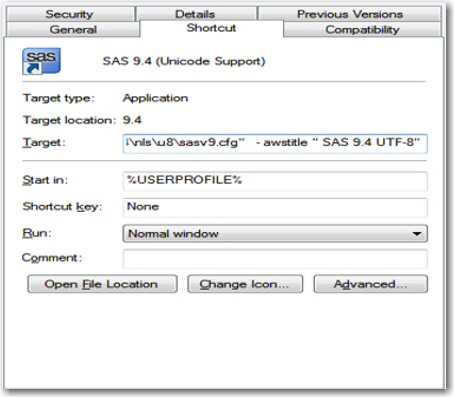 Now, when you open SAS, you can immediately recognize the session encoding based on the value in the title bar.

You can pin this shortcut to your task bar by dragging it from the Start menu to the task bar. Then you should see your custom title when you hover your cursor over the shortcut.

You can prevent this issue by clearing the "Straight quotes" with "smart quotes" option in Word, as shown below. This option is available by selecting File ►Options ► Proofing ► AutoCorrect Option. On the AutoFormat tab, the option is listed under the Replace category. 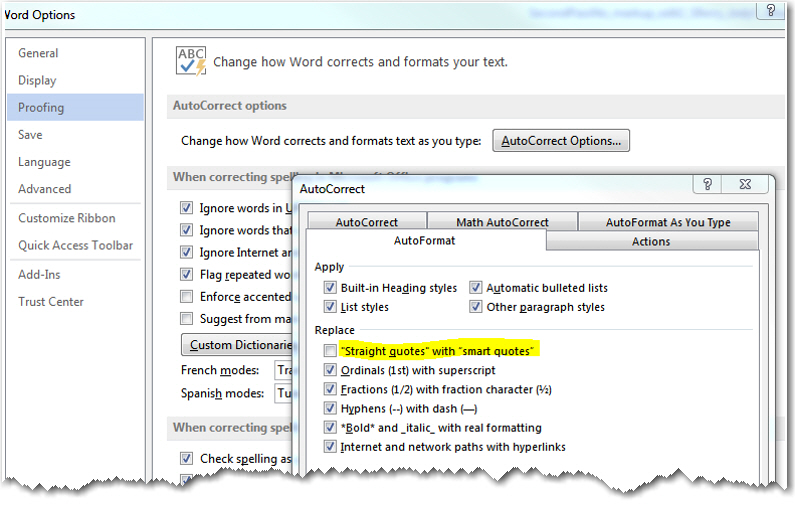 The following example LIBNAME statement illustrates how to specify the CVP engine explicitly:

In this example, the code is submitted in a UTF-8 SAS session. The CVP engine is Read-only, and it is used to read the input data set from the WLATIN1 encoding.

For example, if your data consists of double-byte character (DBCS) data (Chinese, Japanese, and so on), most characters are three bytes and emoji characters are four bytes. Therefore, the default 1.5 value for the CVP engine might not be enough for the number of additional bytes. A value of 2.5 is a reasonable expansion for DBCS characters, but you might need more.

If you have this kind of multilingual data, you can use the KPROPDATA() function to transcode a character string from and to any encoding and convert characters that are not represented in the target encoding to a character of your choice (a question mark or a space). Note that you must specify BINARY or ANY as the input encoding to prevent CEDA from transcoding your data. (See the next tip for information about suppressing transcoding.) A macro is available in the technical paper Multilingual Computing with SAS 9.4 (on page 7) that you can run to accomplish these tasks.

The value of ASCIIANY means no transcoding occurs on ASCII machines. When the data source is open on an EBCDIC machine, SAS assumes that the data is ASCII and transcodes it into the EBCDIC session encoding. Note: The CONTENTS procedure shows the encoding value: us-ascii ASCII (ANSI).

The encoding options shown above have two other values: 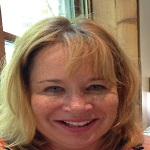 Jody Carlton is a Senior Technical Support Analyst in Technical Support. She has been helping customers solve critical business and technical problems with SAS software solutions since 1984. She made SAS her career after graduating from the University of North Carolina at Chapel Hill. She has worked in the Technical Support, Sales and Marketing, and Education Divisions. She is on the team supporting NLS (National Language Support). Additional support areas include PROC FORMAT, Cross Environment Data Access (CEDA), the Output Delivery System (ODS), PROC HTTP, and Transport files.