If you live in an English speaking country you are used to a relatively unadorned alphabet. Take a look at the French and Spanish languages, where vowels are decorated with accents like “acción” in Spanish, and the circumflex, or the hat used in “pâte” in French. Look at the gorgeous scripting you get to use if you read and write the letter "a" in Japanese: あ . Nice looking, right?

If you work with data that originates from another country or is distributed across the globe, you need to know about the SAS system options that control how the characters in your data are stored. Two of these options are ENCODING and LOCALE. These options will help guarantee that if your Japanese counterpart sends you SAS information in Japanese, you see the appropriate output, and not a series of question marks or blank boxes in your SAS session, or worse, errors in your log window.

What exactly is encoding?

Encoding is not a term SAS invented. It is the way that characters are represented by computers. This W3C Internationalization page is an excellent non-SAS resource if you’d like to study the concept  further.  In a nutshell, characters of natural-language writing systems that together form an abstract character repertoire (like Wlatin1 which covers most West European languages) are mapped to a set of unique numbers (nonnegative integers). An encoding defines the way those numbers are stored in the computer.

Many encoding values exist in SAS, so that in combination with the LOCALE option setting, SAS will run in over 100 countries with SAS windows, pmenus and log messages localized accordingly. The SBCS, DBCS, and Unicode Encoding Values for Transcoding Data is a table of the current encoding values for SAS 9.4.

For example, if I invoke SAS with the LOCALE setting of Korean and an encoding value of euc-kr, I will see notes, warnings and errors written to my log in Korean:

The above text is translated to English as:

Note: Variable a is not initialized

Why is encoding important?

The ENCODING system option is important to SAS programmers because its setting determines how individual characters are stored internally (according to the session encoding).  As an illustration, on Windows, using an encoding of Wlatin1, the character “á” is shown with the hexadecimal representation of E1. However when running a Unicode (UTF8) encoding session of SAS, the same value is stored internally as c3A1:

What is the default encoding value?

As stated previously, the encoding value is set based upon the value of LOCALE, and the regional settings selected in the SAS Deployment Wizard during installation and deployment of SAS software, as shown here: 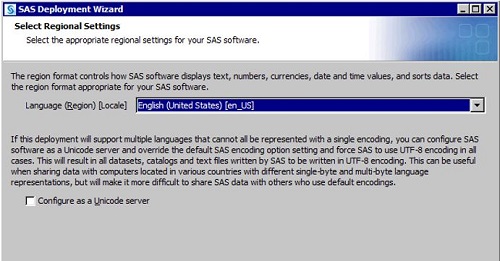 The SAS Technical Paper Multilingual Computing with SAS® 9.4 explains how SAS is deployed for National Language Support.  Three images are automatically deployed for SAS on all Windows and UNIX machines:

What if my encoding differs from others with whom I share SAS data?

You could encounter this error because the data set encoding does not match the SAS session encoding:

ERROR: Some character data was lost during transcoding in the data set

A comparison of the PROC OPTIONS group=LANGUAGECONTROL settings with the dataset’s encoding will help determine what steps you should take to ensure you can access and modify the data set in question.  This SAS Note 52716 discusses the lost character data error in detail.

The most common method of preventing this error is to launch SAS using a different configuration file, so that the encoding for the SAS session matches that of the dataset.  Alternatively, requesting data in a different format (i.e., different encoding) is feasible as well.

The logic shown in SAS Note 15597 shows logic to convert the encoding of a SAS data set. However, if it is the case that you will be sharing data with different languages and encoding values, it is imperative that you communicate with those with whom you share data and SAS files to ensure that the SAS system settings you use consistently allow you seamless access to shared data.

What if I have non-SAS data sources?

If you read or access data from a database such as Oracle, it is imperative that your data base client communicates with SAS in order to correctly interpret native characters.   SAS note 51411 tells how to correct a potential problem for both Windows and UNIX systems, and may require the input of your data base administrator. The SAS Technical Paper Multilingual Computing with SAS® 9.4 describes configuration steps for many other data base clients.

Where can I find more information on this topic? 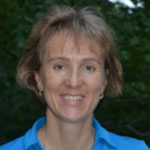