My first trip to Portland, Maine, gave me more than I had expected - it was a touching, heartwarming experience that was not what I thought I'd signed up for. Let me explain: While planning my flight and other travel arrangements, I realized that I would arrive in Portland early enough to take advantage of the pre-conference tour that the conference steering committee always plans for the attendees - this is something that I never allow time for. (These are great sightseeing trips. If you will recall, NESUG 2009 had a fabulous tour of the Ben & Jerry's Ice Cream factory. I missed that one too!) Today, I signed up for the shopping trip to Freeport, Maine, but I got so much more.

To be honest, I didn't fully read the description of the shopping trip on the NESUG registration page:

"Freeport is a beautiful coastal Maine village with over 200 upscale outlets, designer shops, eclectic boutiques, B&B’s, hotels, great restaurants and casual cafes. It is home to world-famous L.L.Bean and to numerous outdoor adventures. We invite you to shop, play, and snack in Freeport!"

It sounded as though we were going to a quaint New England village like Ellicott City, an antiques village I had visited during NESUG 2010 in Baltimore. Not the case. Freeport is the outlet store mecca of Maine - the bargain shopper's heaven on Earth! I'm not much of a shopper - especially when it comes to searching through clearance racks - but I'm so glad that I didn't look too closely at today's destination and miss what was in store. Literally. The truly amazing part of the tour was the part the planners could never have foreseen when they began planning a year ago.
The steering committee arranged for tour attendees to travel to Freeport by bus. We were to park on Main Street by L.L. Bean - the most recognisable location in town. But as neared L.L. Bean, the bus driver realized that Main Street was blocked off. The town had closed the street to traffic because it was commemorating the 1oth anniversary of 9/11 with a parade. The town had invited the Maine Patriot Guard Riders, local and state dignitaries and many local fire houses to cruise down the street to honor the many sacrifices for freedom.
Freeport had also acquired one piece of the 1500 available pieces of steel from the bombed World Trade Center towers and fabricated them into two tower-like statues in a small park between the Town Hall and the town's fire station at the corner of West Street and Main Street. For the memorial service, Freeport had erected three flags - one each honoring victims in New York, Flight 93 and the Pentagon. The town had planted flags honoring and remembering every service man and woman from Maine who had died serving in the war for freedom since 9/11. Town storekeepers and individuals also showed their memories and support by filling their showcases and windows with memorabilia, books, artwork and flags that told the story of 9/11. ﻿This was truly a day of remembrance. I hope our heros, both serviced men and women, and those who were living the American dream, know that we will NEVER forget! 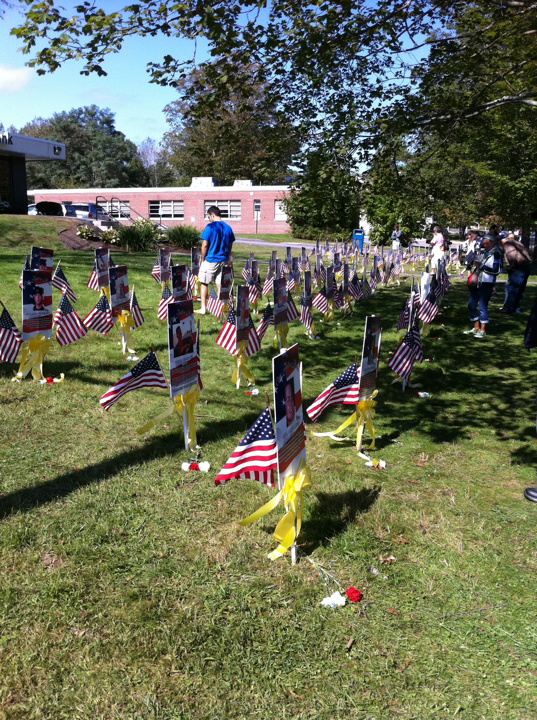 ﻿If you ever have the choice between taking an earlier flight so that you can take the pre-conference tour or sleeping in a little later, my suggestion is to take the early flight. You just never know what you might miss.
UPDATE: 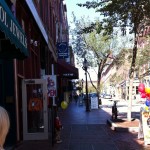 If you're looking for a walking tour, consider taking a short hike to Exchange Street (consult the convenient map in your NESUG packet). It's three blocks to the Old Port district.
I found everything from extraordinary Maine pottery that looks and feels like fine pottery to kitchy, cool watering cans for my garden. There are eclectic art galleries like Abacus and chain souvenir shops including Cool as a Moose. And how about Gritty McDuff's Brewtique?
I went looking for a place for lunch with Wifi so that I could write a blog post and found my kitchy antique shopping fix. Don't forget to stop at Maxwell's Pottery Outlet; it's not your typical outlet. Maxwell's is the only place that I've ever been that had porcelian speckled Guinea hens - that's right, Guinea hens. The small is about 8" tall and costs US$100. 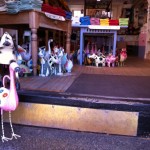 I bought a beautiful spring chicken watering can from Maxwell's for my garden. You can choose from cows, lobster, bumble bee's, roosters and even a light house.
Tags NESUG US Regional Conferences
Share Twitter Facebook Pinterest LinkedIn Email XING