With talk of tariffs in the news lately, I'm sure everyone is curious about possible ways to bypass them. One possible loophole is using the foreign-trade zones (FTZs) in the US. What are FTZs, and where are they located? Read along and find out!...

The Foreign-Trade Zone act was passed in 1934 (after the Smoot-Hawley tariffs of 1930). While items are in an FTZ, it is as if they are outside the US - duties, taxes, etc are not paid until the items leave the FTZ. Here's an early example of how the FTZs were used in the 1930s: "Importers would sail to Staten Island with boxes full of nuts, let the nuts sit in the zone until they lost water weight then pay lower customs duties because the nuts were lighter than when they came in."

In 1950, manufacturing was allowed in the FTZs. Here's an example of a tariff loophole it opened up: "Whole tractors can be imported duty-free, but some tractor parts do have tariffs. By bringing the parts into a zone, building the tractor in the zone and only then importing the product, John Deere can pay the tractor tariffs, which amount to zero, instead of the taxes on its parts, which could be higher."

While we're on the topic of tractors, here's a picture of a tractor from my friend Ben (who runs my favorite restaurant, Ole Time Barbecue). It's a 1941 Oliver 60 Row Crop. His grandfather's father bought it brand new and his grandfather drove it many years and still has it today at the age of 90. Ben's daughter looks right at home on it, eh!?! 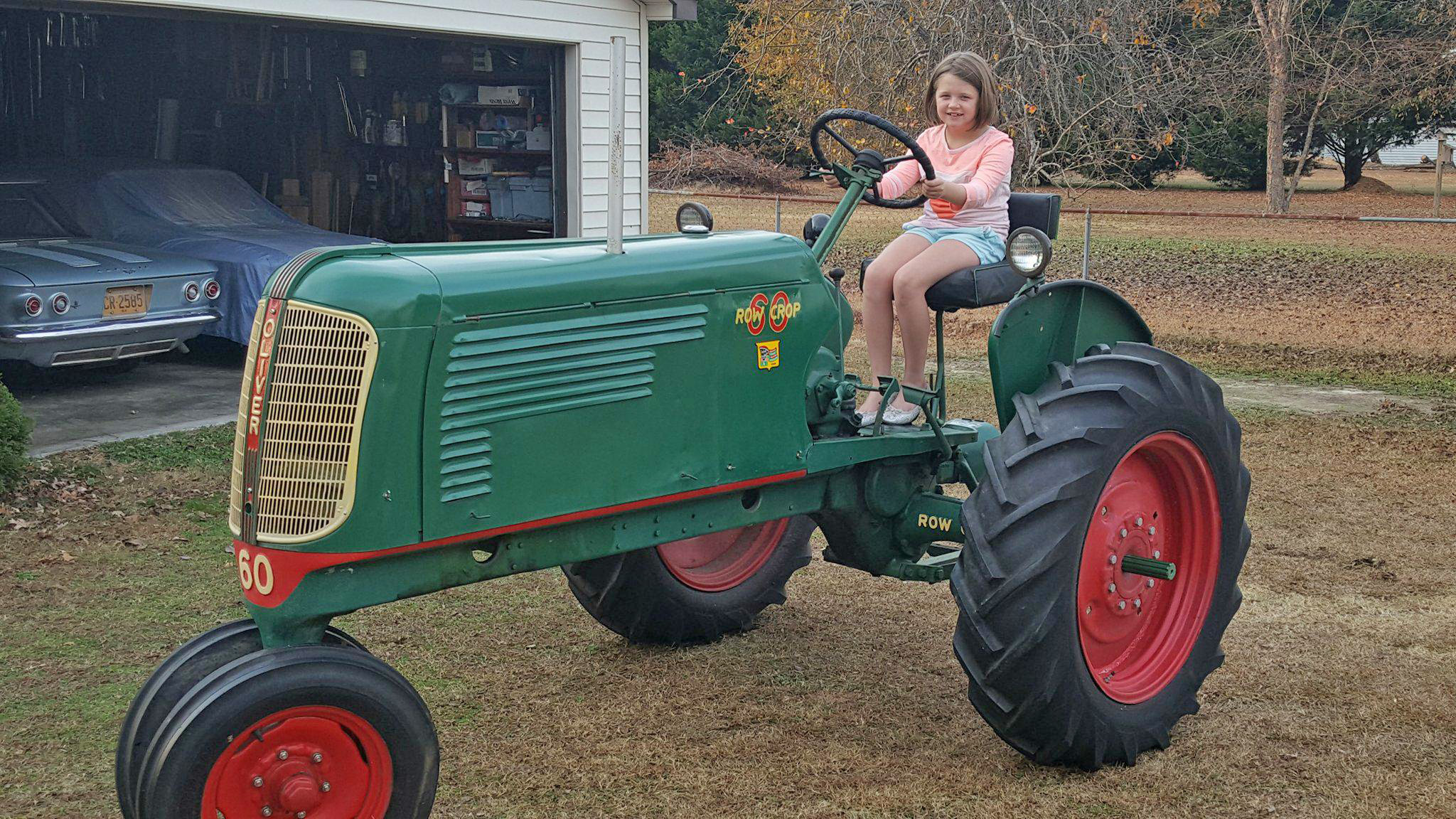 Now that we know what FTZs are, let's find out where they are! The official FTZ page has a map, with each state shaded based on the number of FTZs. They don't have a color legend, but I assume the darker areas have more. Looks like all of the states have some FTZs, and some of the states have more than others - but that's about all this map tells me... 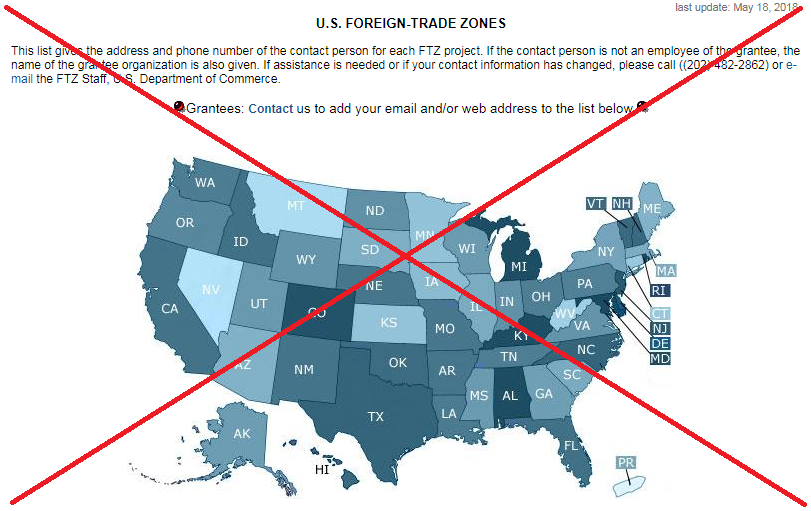 It's not all that useful to just know that there are FTZs in North Carolina - I'd like to also see where they're located. Is there one close to me in central NC (near the RDU International Airport)? How about at the shipping ports along the NC coast? I decided to create a more detailed map to answer these questions!

I found the list of all the U.S. FTZs on the official website. Here's a screen capture of a portion of the table, showing the FTZs in my state (North Caroline):

I copy-n-pasted the table into a text file, and wrote some SAS code to parse it into usable fields. It was easy to get the FTZ number and name, and the Grantee (since they were always the first 2 lines), but I had to get a little tricky to figure out which line was the street address - I just kept reading lines until I got to one that the first 5 characters of the last space-delimited string were all-digits (testing with the SAS notdigit() function). Once I had the data parsed and imported into SAS, I used Proc Geocode to estimate a latitude/longitude position based on the zipcode. 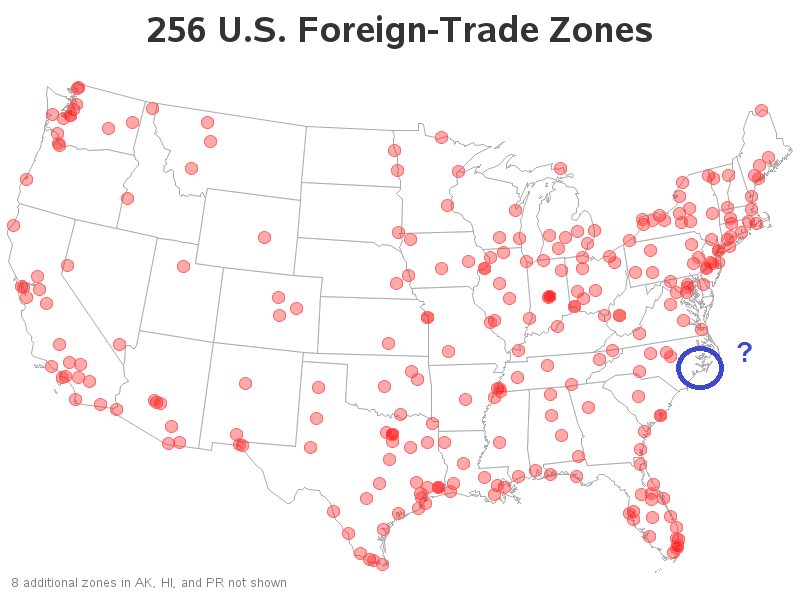 In the map above, it looks like there are two FTZs near me in central North Carolina, and none at the NC coast. What?!? Upon closer examination of the table data, it appears that there should be one in Morehead City (along the coast) ... but the address listed for the Morehead location is Raleigh (in the middle of the state). I guess the address in the table is for the Grantee/contact-person, not necessarily the location of the FTZ. This shows why it is always important to go back and verify your results - data problems are often the hardest and most time-consuming to resolve!

I hard-coded the lat/long for the Morehead City FTZ, and re-generated my map. Now I have an FTZ marker along the North Carolina coast. This fixed the one data problem I happened to recognize, but there could be others (ie, this map might need more work). 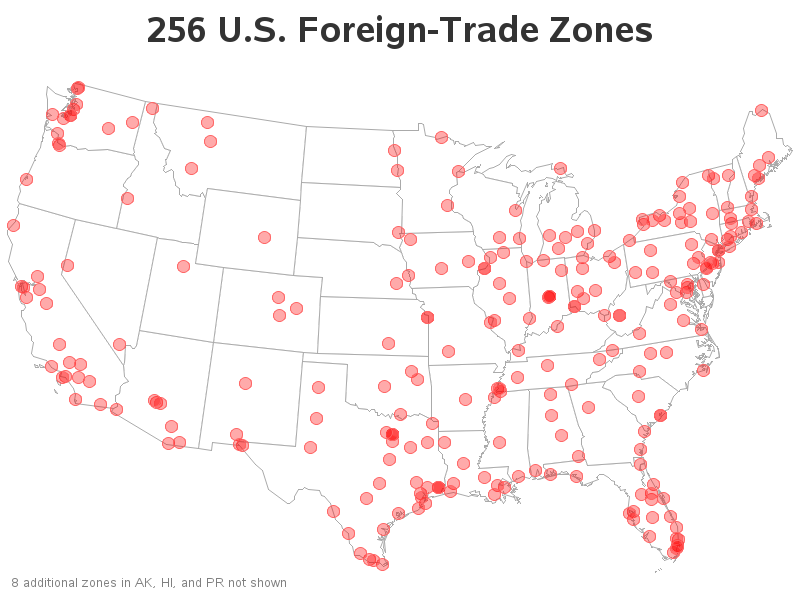 Are there any FTZs near you? Click the image above, to see the full-size version with HTML mouse-over text and drill-downs. If you notice any dots in the wrong location (like the Morehead City one was), let me know!