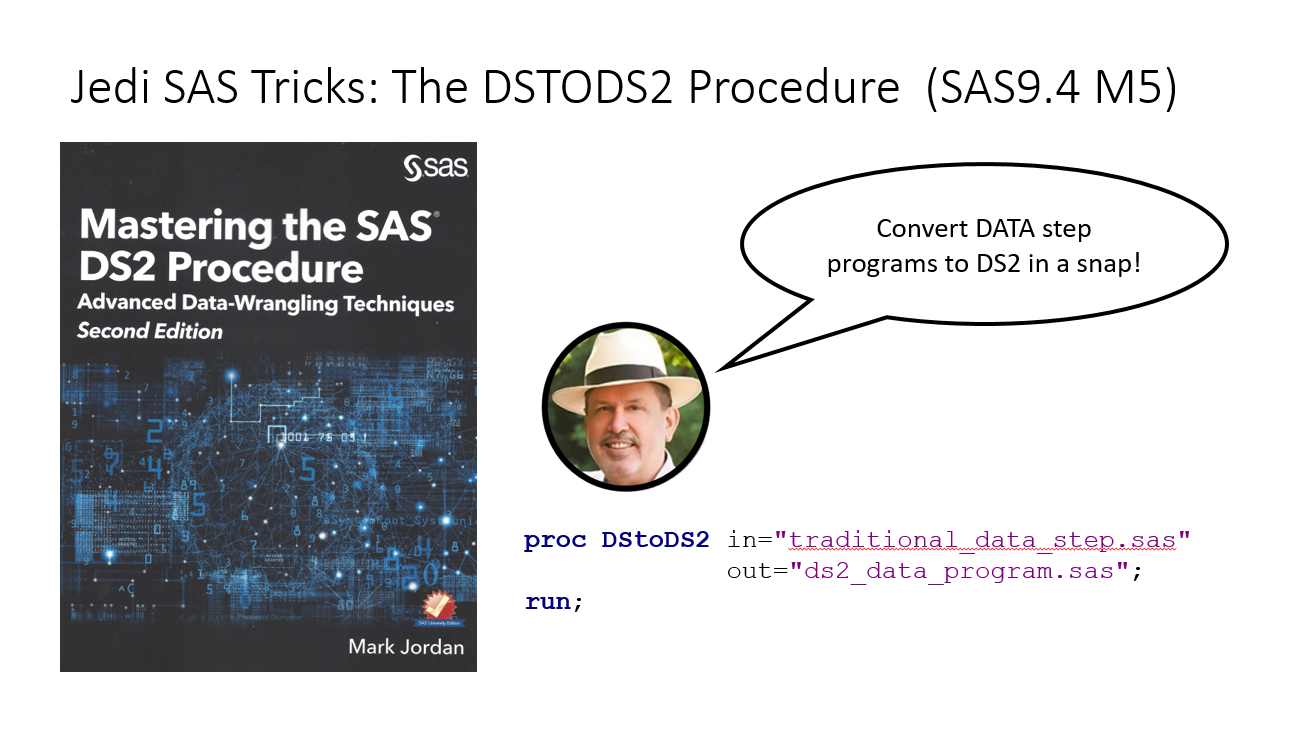 What new things will I learn in the second edition of
Mastering the SAS DS2 Procedure?

You have the infrastructure, and you know that DATA step would run so much better in DS2, but it’s complicated and you don’t know how to get started. Well, if you have SAS 9.4M5, rejoice! The DStoDS2 procedure is here, and it’s a humdinger! (No, Chris, not a Hemedinger… ;-) It's one of the many new things you can learn about in the new second edition of "Mastering the SAS DS2 Procedure - Advanced Data Wrangling Techniques"

Here are a few important caveats we should be aware of before diving in:

Having said all of that, PROC DStoDS2 makes converting traditional DATA step code to DS2 a snap! Let’s try it out on a sample program that as a lot of typical DATA step features:

We’ll save that to a file named DStoDS2_data_step.sas. Next, we’ll write and execute a PROC DStoDS2 step to convert the DATA step program to DS2 and save the new program as DStoDS2_data_step_converted.sas:

A quick look at the output shows it’s not too pretty, but it seems functional enough. Because I’m working in SAS Studio, a quick click on the Format Code button makes it more legible. For the purposes of the blog, I’ll format it a little by hand:

That’s not too bad, actually. I have to add the PROC DS2 statement and the RUN and QUIT, obviously. I’ll remove that unused _return: label. And for efficiency’s sake, I’ll convert the IF _N_ =1 DO group into an INIT method:

Now, that seemed almost too easy, didn't it? Let's run my shiny new DS2 program, and check the log to make sure everything is running smoothly. Oops! It looks like my DS2 program produced a warning in the log:


So back I’ll go to the editor, and add a declaration for the COUNT variable. This time it runs without a warning. Now, I’m a suspicious guy, so I’ll sort the outputs from both processes into the same order and run PROC COMPARE to ensure it’s all working as expected. Sure enough, I get that lovely “No unequal values were found. All values compared are exactly equal.” report.

So that’s the scoop – PROC DStoDS2 can ingest some pretty complex DATA step code and do 99% of the work needed to convert it to DS2. Remember Jedi Programming Rule #1? If not, here you go:
“Lazy programmers are great programmers.”

So lazy programmers of the world, rejoice - the DStoDS2 procedure has arrived! And, if you’re too lazy to copy the code in this post by hand, you can download the ZIP file from this link.