What is it that people like so much about motorcycles? The thrill/excitement/freedom of riding them, the 'biker image' portrayed in movies, or great songs such as Little Honda by the Hondells? I'm not a biker per say, but I do have a couple of motorcycles, and am a known associate of some bikers. Therefore when I saw a graph of some biker data, it caught my attention and I had to try my hand at improving it.

But first, here's a picture of one of my biker buddies here at SAS, Mark - he's got several bikes, and especially likes to ride on race tracks. The graphs below have a '>=50' age category, and you probably would have never guessed that Mark has been in that category for many years! :) 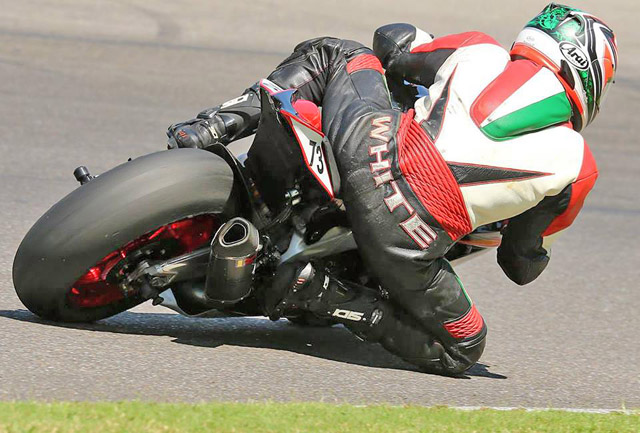 And now, let's proceed with the data analysis!

I recently saw a very interesting graph on dadaviz.com showing motorcycle deaths by age category. The feature about the graph that jumps out at you is that the percent of deaths for the <=29 age group seems to have gone down significantly since 1975. So, of course, I found the data, and created my own version of the graph using SAS: 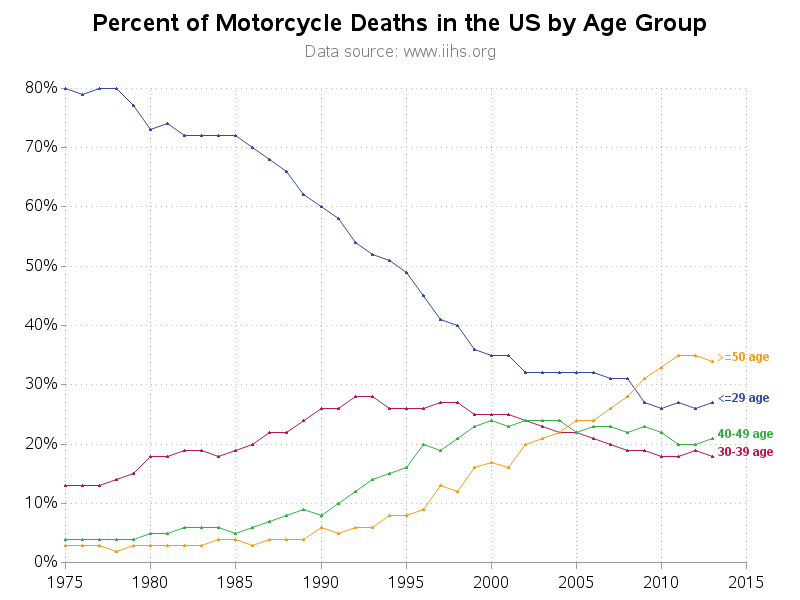 The data also had the total number of deaths per age category, so I plotted that too. And from this plot, it looks like the number of deaths has generally been on the increase since year 2000. 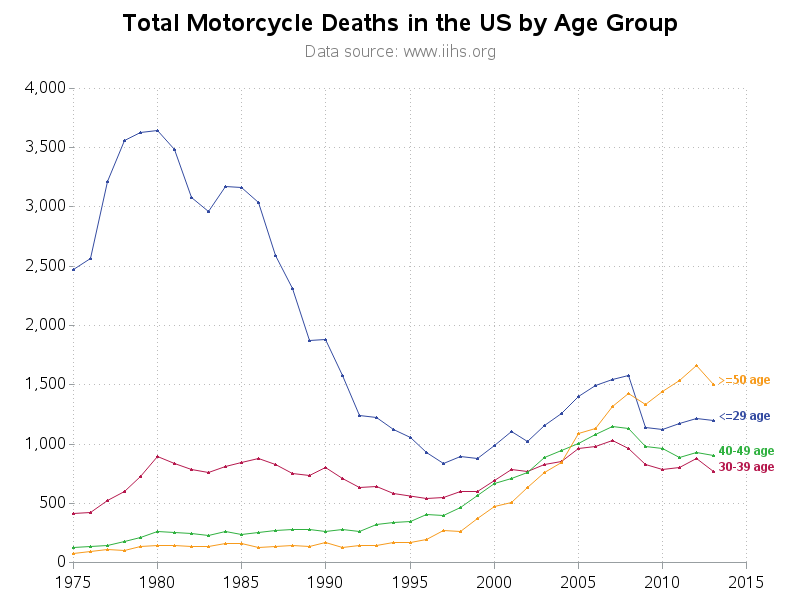 But both of the above plots have a serious weakness - they don't take into consideration the number of riders (or bikes) in each age category. And that particular data (by age category) seems a bit harder to come by, so I decided to work with the data that is easily available, and see if I could shed some more light on these numbers.

First I added up the deaths from all age groups, and plotted the total deaths per year: 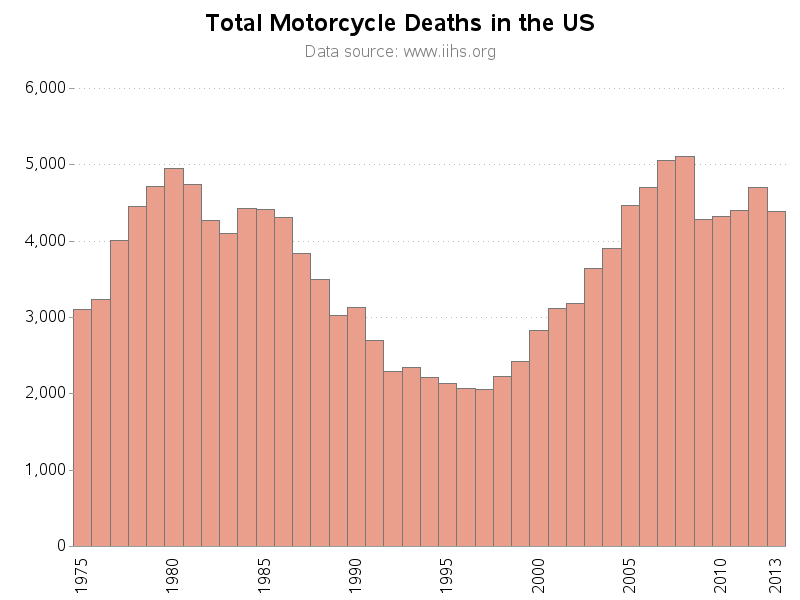 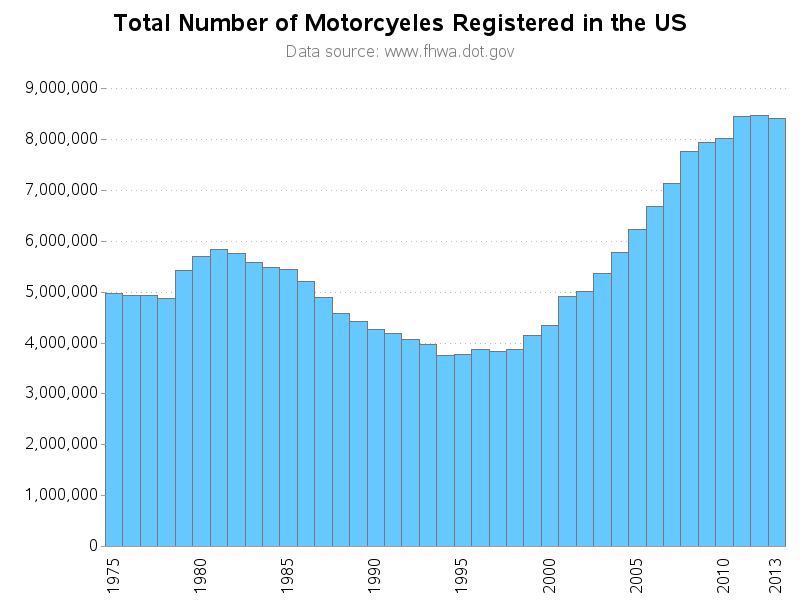 And finally, I used Proc Sql to combine the data from the previous two charts, and calculated the number of deaths per 100,000 registered motorcycles.

And this number has been generally going down over time, which is good news, and is a better/more-true representation of what's actually happening, IMHO. 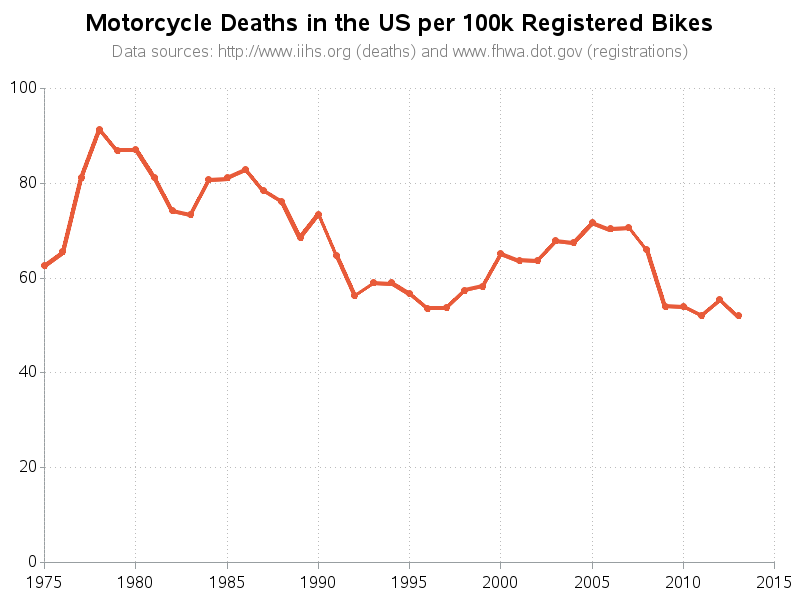 Hopefully you enjoyed this little demonstration of the power of combining data!