“Dear Cat, In a repeated measures drug study, I am unsure what to do with the baseline measurement. Since it is one of the time points in my study, I feel like I should use it as one of the dependent variable measurements. But I have seen analyses where baseline is treated as a predictor variable instead. Which one is correct? The model is a hierarchical linear model using PROC MIXED. Signed, Repeatedly Uncertain”

Put aside your baseline measurement woes, and grab a hot cocoa and some holiday frosted cookies. This will be worth the calories.

In repeated measures experiments, it is common to have some pre-treatment, or baseline, measurement of the dependent variable. This is useful for several reasons. First, you can make sure that your randomization scheme resulted in groups of patients who had similar responses, on average, to begin with. Second, if there is some difference between groups on the response, you can use the baseline measure as a covariate, interacting with the treatment (drug), to statistically account for those differences. Third (and most important), you can look at how your treatment changes the response for the patients compared to the baseline. This is easily done by computing a change from baseline as a dependent variable. When you do this, the tests of whether the response differs significantly from 0 are useful!

There are lots of other cool ways to assess whether the treatment was effective that I won’t go into here.

Let’s talk about two ways to handle baselines in your multilevel model:

Suppose you were interested in the effect of catnip toys (two brands of catnip toy and a third placebo toy) on Friskiness Activation Test for Cats* score (FATCat). To help you identify the best brand, 72 cats are measured for baseline FATCat, and then randomly assigned to receive one of the three toys. FATCat is then measured each minute for the next 7 minutes (higher values of FATCat mean that the cat is having a bigger catnip high). There are eight repeated measurements of FATCat, including the baseline. Here’s a snapshot of the average response for each toy group: 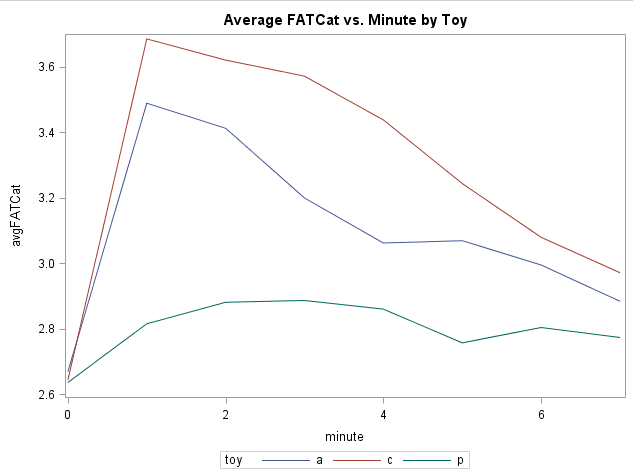 It appears that the baseline measurements are similar for the three groups of kitties. For the two active catnip toys (a and c), there appears to be a sharp increase in FATCat immediately after treatment, followed by a gradual return toward baseline. The placebo (p) shows a small bump in FATCat (wishful frisking?) but then hovers close to baseline for the duration of the follow-up measurements.

How to model this? What to do with that pesky baseline?

Pesky baseline: Notice the dogleg (pun not intended) from time 0 to the rest of the time points. Note that the analyst wants to treat time as a continuous variable.

Approach 1: Use baseline as a time point measurement and fit a piecewise linear mixed model. You’ll have essentially two different intercepts and a slope that starts after the treatment is given.

Approach 2: Use baseline as a covariate. You’ll have a simpler model with slightly fewer parameters and all effects are conditioned on the baseline measurement. This model might or might not use a deviation from baseline (Change-in-FATCat or FATCatdiff) as a dependent variable, depending on whether it is more important to interpret and predict the absolute level of FATCat, or the change in FATCat from baseline.

Click here to see how to do it in SAS PROC MIXED. For example:

By the way, if frisky kitties are not your thing, Littel, et al.’s book, SAS for Mixed Models, Chapter 16 has a different example. It’s a terrific book, and makes a nice stocking stuffer for your dearest analytically-minded friends.

You’ll recall that we are interested in FATCat measurements on 72 cats taken each minute for 7 minutes after administration of a catnip (or placebo) toy.

APPROACH #1 Using baseline as a time point measurement: Fitting a mean model with this dogleg pattern is a little tricky, but you can do it with a piece-wise fit. To accomplish this, you will need two intercepts: one for baseline, and one for after baseline. You will also need the slope to start after baseline since there should be no effect of toy on baseline (unless, of course, your cats can time travel).

Your random coefficients also need to reflect different intercepts for baseline and after baseline as well as the random slopes for minute. This complicates your model a bit and increases the number of covariance parameters being estimated. I’ll show you all of this below.

The new variable posttest takes on a value of 0 if the measurement is minute 0 and 1 otherwise (there are no missing minutes, so this simple line of code works well).  Minutex remains 0 for baseline, but shifts the post-treatment minutes back by 1 so that the first posttest minute = 0.

Here’s the PROC MIXED syntax for the piecewise linear fit:

Fixed effects: The model statement has an implicit intercept, which will yield the mean of FATCat at baseline. The variable posttest provides the new intercept shift after treatment is administered for toy p (the reference level). The toy*posttest effect provides 2 parameters, the intercept deviations from toy p for toys a and c, all post-treatment. The effect minutex provides the slope for the post-treated minutes for toy p, and toy*minutex gives deviations from that slope for toys a and c. In total, seven fixed effect parameters are estimated: 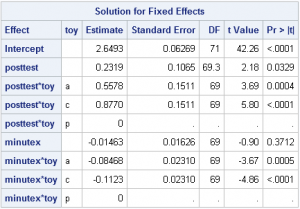 Random effects: The random intercept, posttest, and minutex effects allow for cat-to-cat variability in the two intercepts and the slope as described above. This results in a block-diagonal G matrix with 3x3 unstructured blocks for each cat, resulting in six estimated covariance parameters:

Here’s a plot of the model-implied trajectories for the cats: 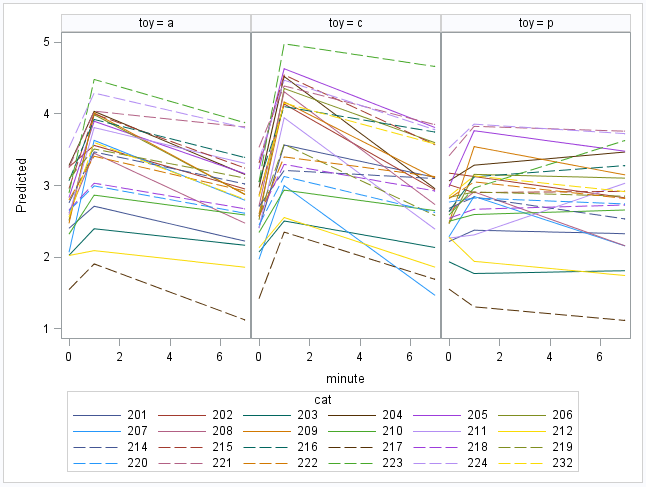 Can’t you just see those frisky kitties jumping about? These are the cat-specific predictions of FATCat, including baseline.

APPROACH #2 Using baseline as a covariate: Another way to look at this is as a deviation from baseline, and in some ways this is easier than the first approach I showed above. Look over the seven (post-treatment) average measurements of change from baseline for the three toys: 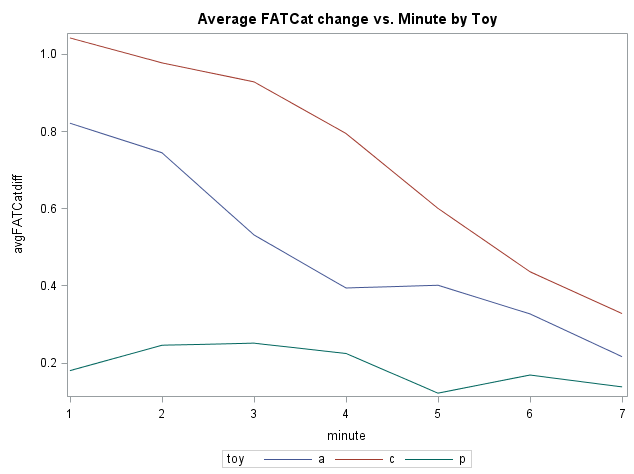 The dogleg is no longer apparent because the baseline is not part of the response (which, I’m sure, will make the cats happier). Instead, baseline is included in the model as a covariate. As before, the greatest change from baseline appears to be among the group who received active catnip brand c, followed by catnip brand a. The placebo group does not show much change from baseline. Now to fit the model!

The code is more straightforward because there is just an ANCOVA for the mean model, with random intercepts and slopes for the cats. In other words, a no-frills multilevel model. 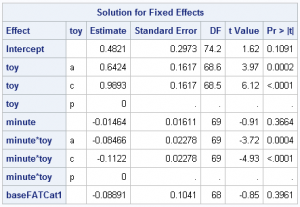 The model implied trajectories for cats’ changes in FATCat are shown below: 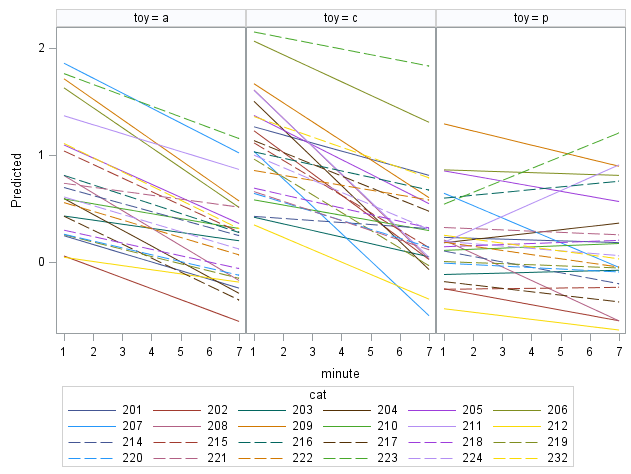 Not as frisky-looking of a plot, but just as easy to interpret. These are the predicted cat-specific changes in activity from baseline.

In addition to what I’m showing you here, Littel and colleagues have a handy table on page 717 that lists pros and cons of treating baseline as either a covariate or as a time point. See why it’s such a nice stocking stuffer? My mom already has her copy.

If you’re interested in learning more about models like this one, check out the course Mixed Models Analyses Using SAS.

Of course, you don’t have to use FATCatdiff as the DV here; you could simply use FATCat. The interpretation is different, but still quite useful. That holiday gift will have to be opened another day.


Catherine Truxillo, Ph.D. has been a Statistical Training Specialist at SAS since 2000 and has written or co-written SAS training courses for advanced statistical methods including: multivariate statistics, linear and generalized linear mixed models, multilevel models, structural equation models, imputation methods for missing data, statistical process control, design and analysis of experiments, and cluster analysis. Although she primarily works with advanced statistics topics, she also teaches SAS courses using SAS/IML (the interactive matrix language), SAS Enterprise Guide, SAS Enterprise Miner, SAS Forecast Studio, and JMP software. Before coming to SAS, Catherine completed her Ph.D. in Social Psychology with an emphasis in Statistics at The University of Texas at Austin. While at UT Austin, she completed an internship with the Math and Computer Science department's statistical consulting help desk and taught a number of undergraduate courses. While teaching and performing her own graduate research, she worked for a software usability design company conducting experiments to assess the ease-of-use of various software interfaces and website designs. Cat's personal interests include triathlon, hiking the woods near her home in North Carolina, and having tea parties with her two children.