You’re down by 10 points in your NFL fantasy football league, and you need to choose a wide receiver from the free agency pool because your starter was injured. How do you decide to get the 11 points required for a win? What methods will you use to lead you to that decision?

Fantasy football managers are constantly making those tough decisions throughout the season. For years, fantasy managers have made decisions based on watching games, studying box scores and going off their intuition. Typically, their decisions come down to answering simple questions: “Why should I start that player over this player?” Or “Why should I pick up this player out of free agency over that player?”

Nowadays, volumes of data exist to help fantasy managers make hard roster decisions in the pre and post-draft process. To improve results, some fantasy managers are plugging statistical data into sports optimization models to analyze the game and choose players. Advanced data platforms like the NFL’s Next Gen Stats or the MLB’s Statcast quantify and track live-action moments on the field of play.

At a basic level, most sports optimizers simulate games several times and produce various outcomes based on a user’s desired player pool and associated risk. Optimizers use advanced stats to help identify players who maximize projections within a certain risk tolerance and variable constraints. Users can see the optimal player or lineups based on those constraints.

However, some metrics carry more weight than others in the evaluation process. Fantasy managers constantly have to weigh their options and decide what's most important. Since there are so many advanced metrics used in optimizers to judge player performance, it can be hard to figure out what matters most. So, here are three advanced critical metrics to pay attention to when using an optimizer.

Step one to having a successful year in fantasy football is drafting a team to drive that success. Average draft position (ADP) represents an average range of where players have been drawn across fantasy football leagues. As more drafts are compiled across the industry, the accuracy of where a player is drafted improves. Granted, ADP differs based on what site your fantasy league is using for the draft.

Examining a player’s ADP is the most useful for the draft preparation process and helps understand how players are valued. Understanding ADP allows fantasy managers to develop a draft strategy for drafting that takes all players and their relative strengths into account. Fantasy managers can try to predict when a player could be drawn and where they would be categorized as a “reach” pick. Without ADP, managers would essentially be making uninformed decisions about the actual draft value of a player.

This tool also helps in the later drafts to help pick valuable players that many across the industry believe may perform above their usual average and upside players that not many people think about.

After the draft, it is essential to pay attention to critical differences in how your players are utilized in games, which can be the difference between wins and losses. Opportunity is king in fantasy football.

At its simplest, projected points measure the anticipated season-long or week-to-week performance of a player based on their role and opportunity. This stat projects points by breaking the game down to a play-by-play level and considering all the statistical categories a player can contribute based on their position and how much they’re used in games.

Fantasy players can strengthen their weekly points projections by having success on the field. You want the players on your fantasy teams who are getting used quite a bit to their respective real-life teams. The best players command the ball. However, some categories hold more weight than others. In some cases, passing may be more valuable than rushing or receiving, and vice versa. For example, in many standard leagues, when a quarterback throws a touchdown, it is worth four points, but the player who receives that touchdown receives six points.

Since roster moves are a big part of fantasy football, this tool can be good for identifying potential overvalued and undervalued players based on role, injuries and form. This is an excellent tool for weekly starting lineup decisions.

Coined by Football Outsiders, defense-adjusted value over average (DVOA) calculates a player’s success related to scoring points. It compares player success on every play or situation in a game to a league baseline of zero, based on down, distance, score, strength of opponent and other factors to determine value over average. Considering football’s main objective of getting in the endzone, DVOA credits yards gained towards a first down (10 yards); so, five yards on third-and-3 are worth more than 5 yards on first-and-10.

Since DVOA is listed as a percentage and the league average is normalized to 0%, offensive players’ DVOA is better when the number is positively higher. Defensive players are credited for negative values. A wide receiver with a 5% DVOA is five percent better than the average wide receiver across the league. A defender with a -10% DVOA is 10 percent better than the average defender.

In other words, DVOA is an advanced metric that considers situations that standard stats might not. For example, a quarterback can throw for 350 yards and three touchdowns and in the box score, this looks great. But what if that quarterback trailed most of the game and lost? Regarding DVOA, the number may take a hit, considering that teams tend to pass the ball more when behind in the game.

This metric is rising in popularity among fantasy football enthusiasts and is a valuable indicator of how above average a team or player may be. This stat can help fantasy managers target and avoid specific offensive and defensive player matchups when making weekly roster changes.

As the popularity of fantasy sports converges with the availability of player data, many data scientists and enthusiasts are building custom optimization models for fantasy sports. Sertalp Çay’s Fantasy Premier League (FPL) Optimized is an excellent example that demonstrates the usefulness of optimization. The platform uses analytical tools, methods and advanced statistics to help players decide what world soccer roster moves to make each game week. Metrics like

Çay, a data scientist at SAS, started as a fun way to test analytical models versus the “eye test,” which is, simply, your own observation of the players’ abilities. Çay has generated thousands of followers and his platform has inspired others to create their optimizers. 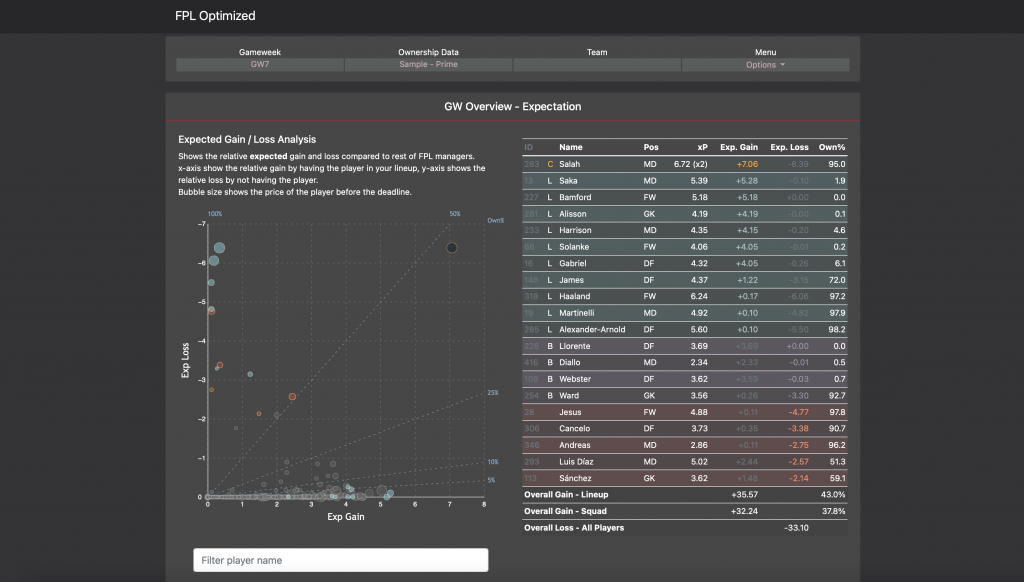 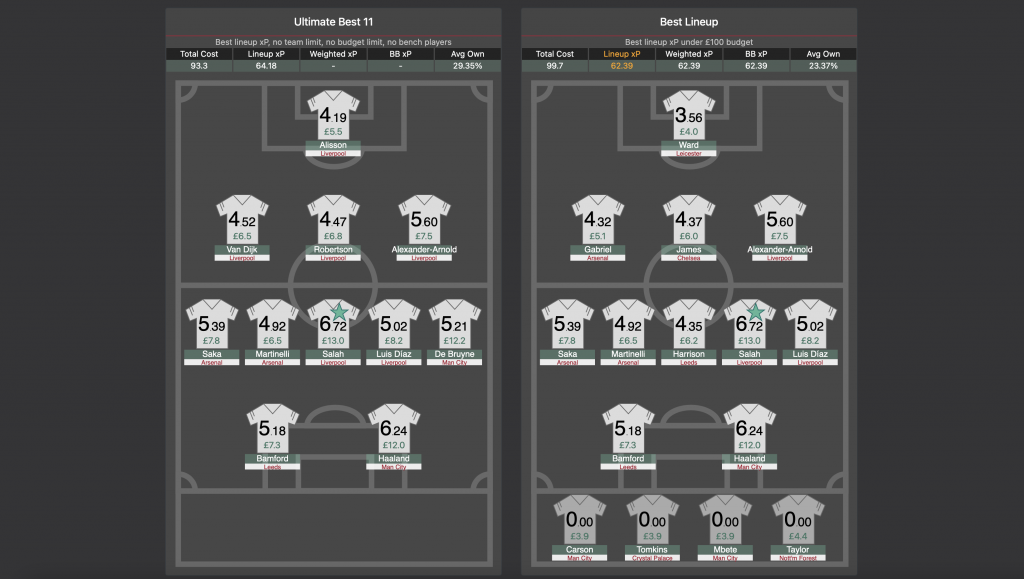 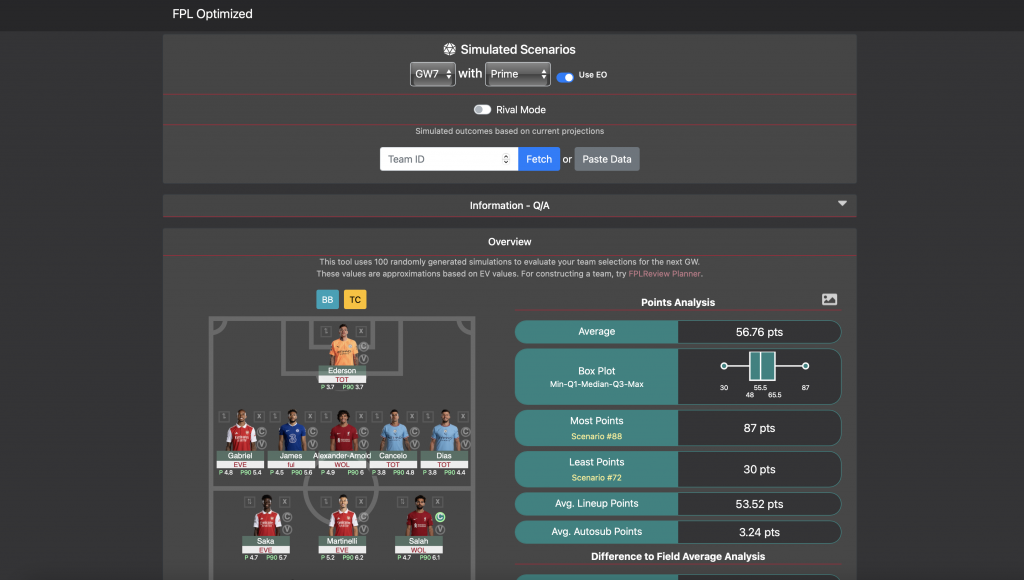 “I realized that many players on Twitter are constantly reading and investigating what’s out there. People eventually found me,” Çay said. “People were trying to build similar models. We then created a Discord community to exchange ideas and people are very active. They’re all from different backgrounds. Some have little knowledge about it and others have PhDs. In the end, many of them get motivated to learn programming languages and all, it’s nice.”

Using sasoptpy, a Python interface to SAS Optimization solver and flask package as an interface, Çay’s FPL Optimized can give soccer fans a snapshot of potential player performance outcomes using advanced stats and considering underlying expectations. Communities like FPL Optimized are using data tools that have undoubtedly played a role in the massive growth of the fantasy sports community.

In the end, whether you compete for fun, place something on the line, or are a diehard fan or casual watcher, succeeding in fantasy football takes a deliberate strategy. Taking advantage of optimization models and advanced metrics offers a statistical view into sports that the “eye test” does not. Optimizers also eliminate hours of manual research into stats, player news and trends, enabling quicker and sharper decisions to gain an edge over your opponent.