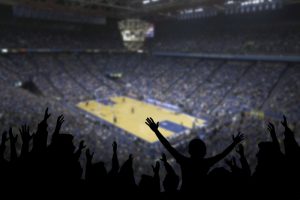 If you consume NBA content through social media, then you know just how active that online community is. Basketball arguments and ‘hot takes’ on the Internet are about as commonplace as Michael Jordan playing golf instead of running a functional NBA front office. I wondered if NBA fans happened to also take their opinions to Yelp, so I ran a few text analytics models with SAS to find out.

In short, the answer is no. Fans do not express discontent with team performance on Yelp, and Yelp star ratings do not seem to be affected by how much or how little a team wins (more on that later). Based on what the fans say on Yelp, the Memphis Grizzlies have the best arena in the NBA, and the Sacramento Kings have the worst.

In general, I came across lot of interesting findings about what basketball fans / concert goers have to say about NBA arenas. The rest of this blog will explore some of these findings.

For those unfamiliar with text analytics and SAS, one of the things we can do is feed SAS a collection of unstructured text fields. I fed Yelp reviews from every single NBA arena into SAS, and it returned a list of topics that most frequently showed up in those reviews.

The topic that had the most negative reviews contained the words: ticket, tell, customer, service and security. In other words, if someone wrote a review and that review mentioned something about their ticket, a customer service experience, or security, then that review was more often than not a negative review.

Figure 1. Text topics for Yelp reviews from all NBA arenas

Similar analysis can be done for individual arenas to find topics that are relevant and particular to that arena. For example, the figure below shows us the most common topics for Yelp reviews of the Spectrum Center, where the Charlotte Hornets play.

A couple of things jumped out at me:

Figure 2. Text topics for Yelp reviews for the Spectrum Center in Charlotte, NC

The Memphis Grizzlies have the best arena

The sentiment score SAS assigned to each review is very highly correlated to the number of stars the reviewer gave the arena on Yelp. The Memphis Grizzlies ranked 1st in both average sentiment score and average Yelp rating, while the Sacramento Kings ranked last in both categories. View the full rankings here.

As mentioned before, there is no correlation between wins and more Yelp stars. I took the win totals from every team since the 2010-2011 season (excluding the Lakers and Clippers because they play in the same arena) and compared it to the average sentiment score for each team’s arena. The correlation was very weak between the two metrics (r = 0.0954). Below are the full results.

The last thing I did was take all of the topics that SAS output and put them into a predictive model to see which topics are the most indicative of how highly or poorly someone would rate their experience at an NBA arena. I placed the 13 topics that were output by the text analysis into a decision tree model, and the topic with the words “ticket, tell, service, customer, and security” was the most important. This means that if a review contains enough of those words mentioned, then we are very likely going to be able to predict how many stars they rated their experience.

This analysis is important because it confirms that reviews about this topic are highly indicative of someone’s overall impression at the arena. In other words, this analysis removes any possible doubt that bad customer service or security experiences affects the overall experience.

So which teams have the largest proportion of fans mentioning customer service or security in their reviews? Below is the list of the arenas with the top 5 most and the top 5 least mentions of this topic. The higher the percentage, the worse it reflects on that team’s arena.

Figure 6. Teams with the most and least mentions of the “customer service, ticket, security” topic

Curious to investigate your favorite team’s Yelp reviews? Sign up today for a free trial of SAS Visual Analytics and reach out to me at frank.silva@sas.com for a copy of the dataset I used for this blog.