SAS has one of the highest percentages of women working in the technology industry. And yet, a persistent gender gap in technology is cause for concern as the number of women seeking degrees in computing continues to shrink. Why is that? 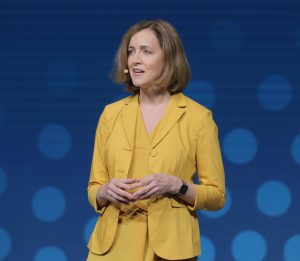 Kicking off day three of SAS Global Forum, SAS Brand Director Susan Ellis explained that there is a perception that computer programming and technology is a male dominated industry. Moreover, young women don’t necessarily find the stereotypical “programmer” relatable to them. There’s a belief that STEM (science, technology, engineering and math) professions are limited, and even somewhat impersonal. And that’s antithetical to the current generation; they want work that matters. They want to pursue careers that can affect change in the world. Statistics show that women are far more likely to stay invested in a high-tech field if they are producing work that is meaningful and focused on creative problem solving. In fact, universities are finding that when engineering courses are based on a specific social purpose, such as reducing homelessness, female enrollment skyrockets from 25% to more than 50%.

“This need for purpose and meaning might help you understand why diversity is so important to the culture of SAS,” said Ellis. “We believe in using data for good and helping our customers develop the roadmaps they need to turn their life-changing ideas into reality. We know that diversity helps us consider new ways of approaching old problems and emerging technologies.”

It’s no secret that SAS is passionate about education and is committed to creating the next generation of innovators.  During the session, SAS Global Forum conference chair recognized bright, ambitious postsecondary student teams who participated in the Student Symposium. Guided by a professor, the teams competed and showcased their skills in the application of SAS analytics in big data. Eight finalists were named in this year’s symposium.

The winning teams were:

Another key component of SAS culture is an unwavering commitment to education. This fall, SAS is going into classrooms to introduce the GatherIQ app to help bring analytics and data literacy to middle and high school students who have not yet seen the correlation between what’s happening in their math class and what’s happening in the world. The GatherIQ app will help identify a global challenge that resonates with students, and offer them ways to look at these issues through both the story and through STEM, and that will help them make a deeper connection to the value of data and analytics.

Exemplifying what happens when barriers in technology are broken, keynote speaker Olympia LePoint revealed the possibilities within STEM and encouraged young people to forge their own path. A literal rocket scientist, LePoint is dubbed the “Modern Day Hidden Figure” by People Magazine. Once instrumental in launching 28 NASA space shuttle missions, her current mission control desk is a science exhibit at the California Science Center. As a math professor at Pasadena City College, podcast and radio show host, she shares her wisdom to empower audiences in pursuing a higher education.

She actually used SAS products to address probability of catastrophic events related to the space shuttle’s main engine.  But she didn’t always think she was destined for a career in math or science.

LePoint confessed to at one time failing algebra, geometry, calculus and chemistry. She feared that she would never be successful in these subjects, and reflected on a troubling time in her underprivileged childhood when she had to decide between buying toilet paper or school notebook paper. And, while struggling with this decision, she also faced temptation to shoplift a box of cereal bars because her family was so hungry.

“I put the box back. I didn’t want to live my life that way. I made a decision that changed my life,” said LePoint.  From there, she received an opportunity for free tutoring throughout her summer break from her inspirational math teacher.  She realized she could rewire her brain to overcome her fear of these subjects simply because she put herself into a supportive environment where she could thrive.

That was just one of many decisions that led to her success.

"You must decide to rewire your brain to overcome whatever it is you've experienced by envisioning yourself in your better future," she said.

LePoint has since realized that innovative breakthroughs don’t happen by accident.  They depend on one simple thing – your decisions.  “Your decisions rewire your brain to beat the odds so you become the positive outlier,” she said.

How big of an outlier is LePoint herself? In 1993, a professor introduced the college freshman to a startling statistic: The probability of a young, African-American female getting a PhD in natural science, mathematics or becoming a rocket scientist is one in 31,000.  She literally became that outlier, the one in 31,000.

In her career, LePoint used her same positive outlook to find success and overcome challenges, including racism and sexism. Early in her career, a mentor taught her the power of listening to overcome differences. When she felt like she wasn’t being heard by people with more experience, her mentor encouraged her to interview the teams and employees she worked with to better understand their perspectives. By interviewing them and asking what they knew and what they were trying to accomplish, she learned to listen to them and they listened to her in return. “Together we found answers as a team,” she explains.

If you decide to invest in genius minds at any age, you will bring innovation to your organization too, encourages LePoint. “Innovation is when you decide to bring something you can't see into reality.”

Be brave. Not perfect.

Reshma Saujani of Girls Who Code doesn’t have the background you’d expect for a person leading an organization whose mission is to inspire, educate and equip young women with computing skills to pursue 21st-century opportunities. She’s not a coder or computer science graduate; she grew up terrified of math and science. Saujani is, however, a daughter of refugees, an attorney and a politician. It’s those aspects of her background that led her into classrooms filled with young boys clambering to be the next Steve Jobs. But what was blaringly obvious with each class she visited was the absence of young women.

But why? Why aren’t girls expressing that same level of interest in computers? “It’s because the messages being embedded in our culture subconsciously allow young girls to believe the myth that they are not good enough for science,” Saujani told the audience during her SAS Global Forum keynote.

She questioned why we push boys towards toys that let them tinker, build and explore, while girls are targeted with Barbies that proclaim, “I hate Math,” and enticed by sweatshirts printed with “I’m allergic to algebra.” Our culture tells girls to strive for perfection, keep their voices down and don’t get messy, while it tells boys to be brave, take risks and get their hands dirty.

Saujani called out pop culture for perpetuating this stigma. Movies and shows like Revenge of the Nerds, Weird Science and Silicon Valley depict a male stereotype of the tech world. Mean Girls shows the opposite end of that spectrum, when a smart female student who thrives in math changes her grade and pretends to struggle in school simply to gain the attention of a boy.

“We have turned girls off from STEM. We have pushed them out when America needs them the most,” she proclaimed. “It’s important that we encourage young girls to be as curious as they are polite, and as messy as they are pretty. We have to help our girls see that coding is as simple as telling a computer what to do.”

Sajauni mentioned that fear, in addition to culture, has a huge impact on this journey. She reflected on her decision at age 33 to run for Congress against an 18-year incumbent. She had a 1% chance of winning, but took on the challenge anyway. After securing only 19% of the vote, she was initially discouraged about her path.

“I was broke. I was humiliated. I had no contingency plan,” said Saujani. “But then I realized – I’m not broken. I always thought if I failed, it would break me. But it didn’t.”

She wants to change the culture and the stigma of failure among women, and change the mindset that women feel the need to be perfect in order to be a leader. She pointed out that women pass up opportunities to rise up to the challenge for fear of not being perfect. Excellence is not perfection.

“Women will drop a course if they get a B. They will only apply for a job if they meet 100% of the requirements – as opposed to men who will apply if they meet only 60%. Because of this pressure to be perfect, women are exhausted and twice as likely to suffer depression than men,” Saujani explained.

This was part of the idea behind creating Girls Who Code. Coding isn’t perfect. It’s a process of failure – trying again and again to get it right. They don’t feel like they’re failing – they feel like they’re problem solving. And then, they can excel.

The exposure offered by Girls Who Code helps shift the mindset of what’s possible for women in the workplace. In the past seven years, the organization has taught 185,000 girls to code, with 6,000 clubs across America, and many of those are in underserved communities.

How can we help these girls change the world?

Saujani encouraged parents, aunts, uncles, and other influences in children’s lives to speak up. “When you see the Barbies, the ads, the discrimination or stereotyping – say something. Post something. Don’t let culture hold our girls back.”

Her final takeaway:  “Practice imperfection. Do something you suck at. Get out of the job you feel ’eh‘ about. When someone bumps into you, don’t apologize. Learn every day bravery. You’re not born brave, but you can be brave. Ninety percent of the time it doesn’t work out – but you’re never one and done. It’s a constant journey.

It’s no secret that SAS is passionate about education and is committed to creating the next generation of innovators.  During the session, SAS Global Forum conference chair recognized bright, ambitious postsecondary student teams who participated in the Student Symposium. Guided by a professor, the teams competed and showcased their skills in the application of SAS analytics in big data. Eight finalists were named in this year’s symposium.