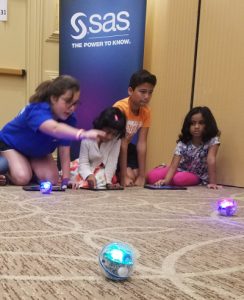 Chess has been intertwined with Computer Science since, well ... forever.

Well before AlphaZero AI defeated all of human chess knowledge with just a few hours of study.

Way before computers even existed, mathematicians studied problems like the knight's tour -- starting in the 9th century.

We know chess can inspire mathematical and technology pioneers. But how about the other way around: inspiring top youth chess players to become science, technology, engineering and mathematics (STEM) heroes? That was our goal, with help from Lenovo, at this past weekend's North Carolina youth chess tournament, 2018 NC K-12 Chess Championship. And Internet of Things (IoT) technology played a big part in the weekend-long endeavor.

Reflections of smartphone AR in a Lenovo Mirage headset

Sponsoring the event for the fifth year, SAS held a technology open house in parallel with the second day of play. We filled it with hands-on (and on-head) cutting edge technology – no charts-on-the-wall enterprise software theater here! Then we opened the doors to the six hundred plus players and families to come visit. On offer were:

IoT technologies were pervasive at the championship – in the tech showroom and beyond. Students were actuating the Sphero robots over Bluetooth to change physical reality. Since IoT is essentially the digitization of reality, the whole eXtended Reality (XR) family (VR, AR, mixed reality and beyond) affords great ways to tell IoT analytics stories. You can tell any story you want: we used VR to tell IoT analytics stories for retail, sports and smart cities as well as giving virtual tours of the SAS campus through the magic of VR.

Plus, XR tech is easy to deploy, much easier than trying to, say, bring a smart building with you.

What about sensors? Computer vision? The Lenovo AR headset is full of them. It needs a beacon to track the headset in space and computer vision to render 3D light saber duelers accurately. It takes a lot of technology to materialize Darth Vader in a room that hosted the state's one day K-1 chess championship just the day before. 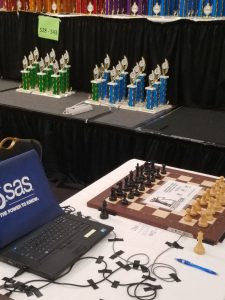 An IoT enabled chess board

Perhaps the most intriguing use of IoT at the championship was beyond the tech room and on the top boards. Chess has a spectating problem. It isn't that people don't want to see top games. It's that tournament chess has to be anti-spectator. Unlike a lot of sports, spectators aren't just a potential distraction – they can undermine fair play. For instance, a spectator could yell out the best theoretical move for a player after plugging the position in to their smart phone. That's a whole different matter than a basketball fan yelling "shoot it!"

ChessStream.com solves this problem by streaming top chess games live over the Internet. How? By digitizing the pieces. The company uses special chess sets that have sensors in the pieces and the board. When a piece is moved, the action is sent over USB to a connected laptop and then on to the ChessStream web.

Computer powered things are pervading reality in every way imaginable. And XR presents reality in new ways. Events like this weekend's NC K-12 Chess Championship, hosted by Charlotte Chess Center and Scholastic Academy, gather large numbers of STEM savvy kids in one place. Very few of the players will go on to become chess professionals. But due to the chess-STEM connection, they could all pursue STEM careers. Bringing them  in touch with the latest tech could inspire that direction, and that helps us all.