Every day 91 Americans die from opioid abuse, every nine seconds a student drops out of high school and every 47 seconds a child is confirmed to be abused or neglected.

That's what drives my team's mission, and I was reminded of this by two amazing speakers at the SAS Analytics Experience government leadership breakfast: Andrew Card, the former White House Chief of Staff, and Col. Greg Gadson, a war hero from Operation Enduring Freedom. It was inspiring to hear their stories and be reminded that analytics can make a real change in the world. I was humbled to be able to introduce both men before their inspiring presentations. Here is a brief look at their stories: 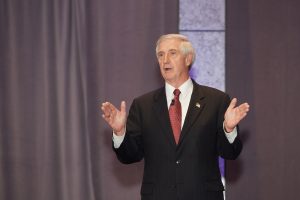 There is a famous photo from September 11 of President George W. Bush listening to school children in Florida read a book. In the photo a man comes up to the president and whispers in his ear, alerting him that a second commercial jet liner has struck the World Trade Center in New York.

“America is under attack.”

The man who spoke those words to the president was Card, the White House Chief of Staff from 2001 to 2006. Card’s job, as he told the federal technology executives at the government leadership breakfast, was to handle the small decisions so the president could focus on the big ones.

“Today we couldn’t do our job in the executive branch of government without the ability of analytics and analysts to take the 1’s and 0’s and make sense of them,” Card said.

Card underscored the power of that information when retelling the events of September 11, walking the crowd through his day with the president. “It was supposed to be an easy day,” Card said. The day’s plan was for the president to run with a reporter, attend the school event, and a few other smaller engagements. When the planes crashed, all of that changed.

“As was always my job was to think of what the president would need before he asked so it would be ready,” Card said.

For Card that included providing President Bush with communications to leaders throughout his administration and military, handling spur-of-the-moment travel decisions, and keeping the president informed on the latest happenings in the country and around the world.

“The president relies on so many people to do his job,” Card said. “It's not just direct employees, but companies like SAS. You take information that is real and collect it. Make sense of it. The president must make brutally hard decisions, so having the right information as the base of those decisions is paramount.” 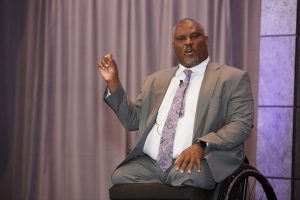 Card shared the spotlight with Col. Gadson, who lost both legs while serving in Iraq. Despite that, he remained on active duty in the Army he loved for seven more years, and became the Army’s first double amputee to take over as Commander of a major installation when he assumed command of Fort Belvoir, VA. As if that weren’t enough, Col. Gadson went on to earn two Masters degrees, and to serve as Director of the U.S. Army Wounded Warrior Program. After retirement he became a motivational speaker and actor.

Col. Gadson told the story of how, in 2005, he was returning from a military funeral in Iraq when his vehicle fell prey to an improvised explosive device.

He was thrown from the vehicle and would have died if not for the medical staff that immediately helped him. That included a private, who was a chemical specialist, but who had completed medical training just weeks before Col. Gadson’s team deployed on its mission.

“The men that saved me did so because they were empowered to act,” Gadson said. “They were trained, they were focused, they were team players that took on additional duties as needed. I was fortunate because of how the military gave them the tools they needed to succeed, not anything that I did.”

Col. Gadson recounted his recovery, which included the amputation of both his legs and the near amputation of his arm. His message was to live up to each day and as leaders to let people – no matter what they do – fully reach their potential.

“I could have easily been a statistic,” Gadson said. “I was fortunate because of the team that was behind us.”

Col. Gadson’s road through the military and veterans healthcare system was rocky at times, due in large part to poor information sharing. He encouraged attendees to consider technologies like SAS to improve data sharing among departments.

The riveting and inspiring addresses by Sec. Card and Col. Gadson at the Government Leadership event were highlights of a conference full of interesting government content. Please check back for additional blog posts highlighting that content from Analytics Experience, and check on the on-demand content.

Paula Henderson leads teams across the Americas in industries such as government, financial services, health care, life sciences, consumer packaged goods, manufacturing, energy and telecommunications. She partners with industry leaders to create transformational digital solutions designed to modernize and optimize the performance of corporations and communities.