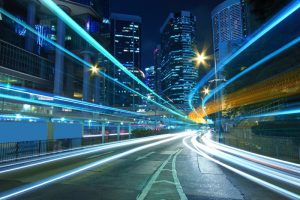 As smart city endeavors continue to ramp up globally, city planners and leaders are often curious to learn how cities around the world are planning to make their cities smarter with the Internet of Things.

Recently, my colleagues and I met with a team from a major city in China to learn more about smart cities trends happening in China. I wanted to share some of what we learned, so you can learn from it too.

In contrast to many countries around the globe, China strongly integrates the local, provincial and national objectives by establishing 5-year plans, which launch “a series of social and economic development initiatives … [and]contain detailed economic development guidelines for all its regions.”

The newest plan, spanning from 2016 through 2020, includes a focus on innovation and information-intensive infrastructure, supports the development of environmental technologies, and encourages a sharing economy; in short, the current 5-year plan is significantly aligned with many similar smart cities initiatives across the globe.

Working with new and existing data

Our meeting with the Chinese executives confirmed that cities and governments around the world face a similar mission. City leaders must assess whether established policies are working; they want to modify policies and drive associated activities when results are not what they expect. And, most important, they need new and faster insight to act quickly and effectively.

In both cases, attention to issues of data quality, integration and management are critical to success. The Chinese government is interested in integrating all of the data that have been collected in the past by different government entities about their citizens and share the enhanced data among the government agencies. City leaders are trying to leverage all of this information as they introduce new policies during the migration of the municipal government to a new suburban district.

Over the course of our meeting, we discussed how SAS helps cities and other entities create a platform for unifying this data and enables city leaders to utilize the platform for the variety of existing and future use cases.  This platform then becomes the center of a smart city’s data and analytics environment and enables the smart city to produce analytical insights that provide real value from data. We shared several examples of how SAS has been helping governments and commercial enterprises for more than 40 years to generate insights from data across any computing environment. And, SAS technology and capabilities has continued to evolve to support that objective.

Why smart cities? Why now?

In 1995-96, the internet had been around for decades already. But it was only used by universities, the US military, and a few very advanced programmers.

Then something happened. A key was turned. That key was the World Wide Web and the web browser. Today, everyone uses the internet, it’s everywhere. It’s even considered an “essential service” by law in many countries.

Well, it’s now 2017. ANALYTICS have been around for decades. Yet, often limited to certain user types, based on skills or technical capacity. But a key is being turned. Right now.

Data has exploded. The ability to HARNESS that data is now accessible to all, fueled not only by advances in connectivity and compute power, but through Analytics – that feed on this data and on this computing power - Powerful analytics, that will deliver incredible results that will affect us all.

Welcome to the analytics economy. Where every insight is the seed for the next insight. Where data, people and machines work together to accelerate the pace of innovation. The analytics economy will ring in a new era of change – from the incremental to the disruptive. As analytics move to wherever data is, we have the capabilities to turn the entire world into a constant hub of smart decision points.

Smart Cities have reached an inflection point too, in which the analytics economy will be a major driver of future success.

The internet of things, coupled with improvements in big data, in-memory data processing and and artificial intelligence is pushing smart cities toward an inflection point.

Suffice to say, our meeting with the Chinese city leaders was highly engaging, and strongly focused on real-world use cases that are already being implemented across the globe. Over the next few months, I hope to highlight some of those use cases here, focusing on the value of an analytics foundation.

As the meeting ended on a beautiful sunny day in North Carolina, our international guests headed off to Duke Gardens for a quick walkabout before their afternoon flight. I think our Chinese guests left with a better understanding of how advanced analytics can help make their cities smarter.

Learn more about how to become a smart city

Bernard Blais and Mirko Mueller-Goolsby also contributed to this post.

Lee Ann Dietz is an analytics evangelist for transportation and smart cities at SAS. She has almost 25 years experience supporting customers with analytical solutions. Prior to joining SAS in 2012, Lee Ann held various positions with Railinc, DZone, Inc., and SAS. Lee Ann began her career with American Airlines and SABRE, after earning her MBA from the Darden Graduate School of Business at the University of Virginia and BA (Economics) degrees from Stanford University.