When an extremely rare aye-aye lemur named Agatha was born undersized at the Duke Lemur Center earlier this year, there was immediate cause for concern. There are only 23 captive aye-ayes in the US, and the wild population is at “very high risk of extinction” according to the International Union for Conservation of Nature. 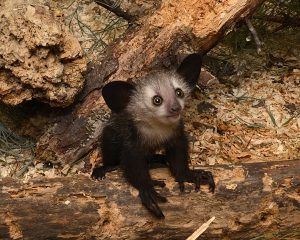 Luckily, the Duke Lemur Center (DLC) uses SAS to compile and analyze data on every lemur they’ve ever housed, cared for and studied over the DLC’s 50-year history – that’s more than 4,000 animals across 31 species. And as you can imagine, that’s a lot of data.

The DLC has huge databases full of information on everything about their lemurs – from behavior to food preferences to medical history and more, including birth weights. Because the DLC has records for so many previous aye-aye births, animal care staff could quickly calculate that the new infant's birth weight was only 67 percent of the average lemur birth weight, and they placed Agatha on intensive monitoring and supplementation.

And that’s just one example of how the DLC uses data to nurture, study and protect the world’s fragile lemur population. In the early days of the center, the exhaustive notes and observations made on lemurs were handwritten, which made data analysis and sharing difficult.

But several years ago, a data management program was established, and now management of all of the lemur data is overseen by full-time employees who analyze the research data, which can be used to study lemur behavior, genomics, physiology, paleontology -- and to fuel conservation efforts. And now that data is accessible to researchers and conservationists all over the world.

A group of SAS’ interns became closely involved with the project this summer, and began spreading the story of the lemurs to others at SAS.

“Never in my life could I have imagined myself discussing data analysis inches away from a group of playing lemurs and having that be just another day as a SAS intern,” says SAS intern Briana Ullman. “But since I’ve been at SAS, I’ve learned that this is just one of many examples of how SAS helps the world use data for good.”