12 hours: That’s how quickly you can die from sepsis.

Oh – you’ve never heard of sepsis?  Not surprising. More Americans have heard of Ebola, a nearly non-existent condition in the U.S., than sepsis – a condition that affects more than 1.6 million Americans every year. 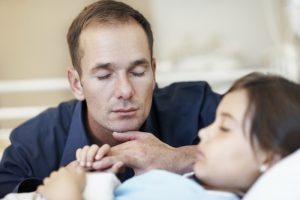 Sepsis is the body’s overwhelming response to an infection and can lead to tissue damage, organ failure, amputations, and death. While some people are at higher risk of developing sepsis (the very old, the very young, and people with chronic illnesses), anyone of any age, gender, ethnicity, or medical history can develop it. This condition does not discriminate.

The good news?  In most cases, sepsis-related deaths are preventable.

Awareness is key – and you can help

Only about half of people in the U.S. have even heard the term sepsis.  Yet, more than a million people nationwide are affected by sepsis each year and nearly 260,000 of them die. Among the survivors, there are an average of around 14,000 amputations. Sepsis is also the leading killer of children worldwide, causing more child deaths in the US than all pediatric cancers combined.

The biggest issue is that people often don’t recognize sepsis as the emergency it is, therefore they don’t seek help until it’s too late. For every hour that treatment with IV fluids and antibiotics is not started, mortality increases by 8%. So many of these deaths could be prevented if sepsis is identified and treated quickly. That’s where the Sepsis Alliance comes in.

Sepsis Alliance’s mission is to save lives and reduce suffering by raising awareness of sepsis as a medical emergency. Awareness is key to saving lives and reducing suffering – which is what led the organization to join the SAS GatherIQ initiative.

Using SAS Visual Analytics, GatherIQ volunteers will analyze data from years of nationwide sepsis surveys to determine areas most in need of education and awareness and how they’ve changed over time. The project will help the organization determine which geographic regions and demographics are least aware of sepsis, and adjust outreach accordingly to best resonate with each distinct audience. These insights will help Sepsis Alliance maximize resources and become more strategic in developing future campaigns to increase awareness of this silent killer.

Just as anyone can be affected by sepsis, anyone can get involved to help us prevent it! Download the GatherIQ app to find out how you can help us raise sepsis awareness and save lives.

Turn data into good, together with SAS

GatherIQ is a crowdsourcing effort from SAS that brings together thoughtful, concerned citizens to lend their time, knowledge and analytic skills to help non-profit organizations address global challenges. Sepsis Alliance is the latest non-profit organization to join GatherIQ, collaborating with SAS and crowdsourced volunteers to learn more from their data.

Learn more about how SAS is using data for good and download the GatherIQ app to join the effort.

Jill Gress has been a member of the Sepsis Alliance board of directors since 2013. She also is a Vice President for Radius Global Market Research, a leading market research firm, where her expertise in research helps develop strategic solutions for her clients to understand issues or challenges they face. Prior to joining Radius, Jill practiced as a Registered Respiratory Therapist at the University of Rochester Medical Center, Rochester General Hospital in Rochester, NY and Brigham and Women's Hospital in Boston. Jill earned her degree in Respiratory Therapy from Upstate Medical Center and a B.S. in Healthcare Administration with a Marketing minor from California College of Health Sciences.