How did one school system save money, improve local traffic and make students happier? With fewer bus stops and better bus schedules

Every fall, highways, backroads and neighborhood streets nationwide take on a noticeable yellow hue, as school buses carefully and methodically transport students back to school. In some areas, including Boston, this massive transportation exercise can present a number of challenges.

Boston Public Schools (BPS) provided transportation for 25,000 students via 650 buses across a collective 45,000 miles per day during the last school year. Within this complex system, buses across the nation’s oldest public school district made more than 20,000 unique stops at nearly 5,000 different locations each day. In an effort to better handle this complexity, BPS worked with SAS to understand where and how it could make improvements to its busing system. 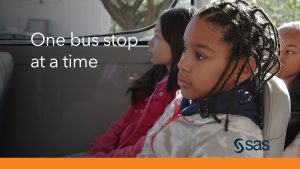 Analytics revealed that the district could operate more efficiently and cost effectively by reducing the number of bus stops from 20 to 50 percent. Simply put – fewer stops means fewer buses, which can lead to better on-time performance and an improved student experience. It also means less traffic and – ironically – fewer hours on the road for students and bus drivers.

With this approach, cost savings could be funneled directly back to the schools. In addition, these changes will lead to traffic improvements citywide and improved air quality – a welcome side benefit to Boston residents.

SAS helped BPS think differently about stop assignments in ways that benefited students too. Using SAS, BPS created more tailored walk-to-stop distance maximums for each student by factoring in variables such as a student’s grade and neighborhood safety. Combining this evaluation with the bus stop reductions allowed BPS to deliver a less complex, more effective transportation system for students.

This project was the first in a larger BPS effort to lower transportation costs and increase efficiencies for the school district using analytics. After this initial effort, the district wanted to further evaluate how fewer bus stops could improve bus routes and potential bell times. BPS coordinated a national-level, several-month-long, virtual “hack-a-thon” called the Transportation Challenge.

The transportation improvements will positively impact students, teachers and parents. And, the changes can be replicated at many other school districts facing similar transportation  issues.

How can you turn data into good?

The BPS story is just one example that shows how SAS and our customers have applyied data science to social challenges around the world for decades. These efforts recently landed SAS on Fortune magazine’s list of companies that “Change the World.”

If you’re interested in using data to change the world too, check out  GatherIQ, a crowdsourcing effort that makes it easy for concerned citizens to lend their time, knowledge and analytic skills to help address global challenges. To get started volunteering your time and talents to address similar social issues, download the GatherIQ app – currently available from Apple’s App Store®. A web application is expected later this year, followed by an Android version.