I've been a SAS programmer for 26 years and counting. I started with the Display Management System (DMS) interface into SAS, which today is referred to as the window environment (and yes, I have used the command line interface as well, which is still available today). DMS consisted of three initial windows: a program editor, log, and output window.

Then SAS Enterprise Guide came out, and on windows and/or server versions of SAS, it's become popular as the default graphical user interface (GUI) into the SAS programming language.

Fast forward to now, and the most recent GUI for SAS coding is the web-based thin client SAS Studio. 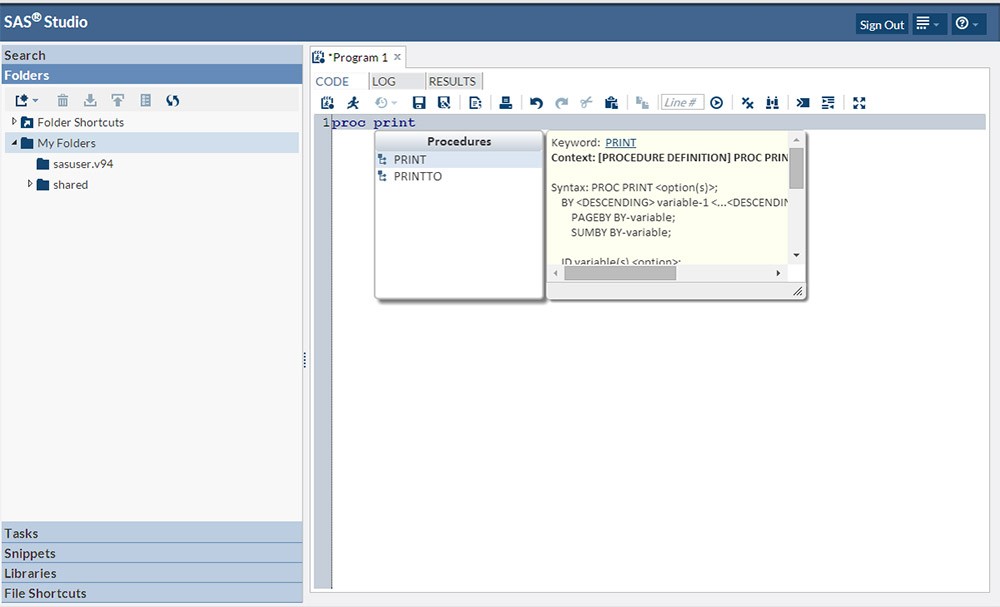 SAS Studio with an example of syntax auto-complete

I recently started using SAS Studio and am pleased with how easy it is for me to use my existing DMS, and SAS Enterprise Guide skills, and to pick up on some of the new features that SAS Studio offers.

For experienced programmers used to DMS, each program pane you open in SAS Studio has three initial tabs: Code, Log, and Results -- which, you guessed it, map essentially to the DMS program editor, log, and output windows.

What makes SAS Studio even better is the ease with which you can have multiple programs open, and each one has its own instance of Code, Log, and Results. SAS Studio also provides the coder with two different perspectives, a SAS programmer perspective and a Visual programmer perspective, something that wasn't available in DMS, but more familiar for anyone used to the process flow diagram within SAS Enterprise Guide.

SAS Studio has syntax completion on by default, but allows you to easily turn this off through preferences or by toggling it on and off with ctrl+spacebar or command+spacebar. This is great because syntax completion can be annoying if you're used to using various parts of the data step and/or a variety of PROCs. But it's easy to turn on when using a new PROC or one you're not as used to using all the time.

There's also a drag and drop function available, with default tasks and snippets which will be familiar to SAS Enterprise Guide users, as well as the ability to create user defined snippets to extend the default set.

These are just a few of the cool features I've found familiar, and I've enjoyed learning to use a new lightweight GUI that's available to work with any version of SAS across any operating system.

If you haven't had a chance to try it out I suggest you do -- and don't be surprised if you start using this as your default SAS programming interface.

Want to try SAS Studio out for free? You can learn to use SAS and SAS Studio by downloading the free SAS University Edition, which runs a vApp so it works on Windows, OS X(mac), and Linux -- or if you don't want to install the vApp locally, you can choose to use it via the Amazon cloud.