Thanks to 100 dedicated volunteers who spent their entire weekend digging into data at North Carolina’s first-ever DataDive: 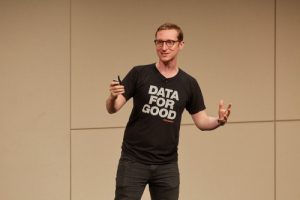 Hosted by SAS in partnership with DataKind earlier this month, the DataDive was described as a “hackathon with social impact.”

At DataDives like this one, volunteers listen to pitches from the participating nonprofit organizations and then choose the one they’ll contribute their time, energy and data expertise to for the weekend.

During the kickoff, Jake Porway, Founder and Executive Director of DataKind, guaranteed volunteers that they would come out of the next 48 hours feeling like they had made a huge difference in the world. “You’ll take your technical skills and work alongside people who want to make the world a better place,” said Porway. 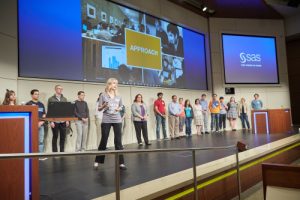 Data Ambassador Natalia Summerville, who works at SAS, discusses the findings of the StepUp Durham group.

The collaboration and the effort inspired and exhilarated the volunteers. “The passion and intensity was amazing,” said Natalia Summerville, a SAS Operations Research Specialist and Data Ambassador on the StepUp Durham project. She noted that some of her teammates were still emailing each other at 2 a.m. Sunday, long after the official work session ended.

DataKind and SAS: a natural fit

It was “no accident that we’re here at SAS,” said Porway. “SAS has Data for Good as part of its DNA.”

Oliver Schabenberger, SAS Executive Vice President and Chief Technology Officer, agreed, saying the “core missions of our organizations are aligned. It’s a natural fit for us to partner together. We’re passionate about data and analytics, and proud to be part of the Data for Good movement.”

At the end of the weekend, it was clear that the DataDive was a success, providing immediate and transformative insights for the non-profits involved. “To the volunteers who have done this work, we owe you a debt of gratitude,” said Sno Bropleh, Associate Director, Collaborative Services at Habitat for Humanity. “This DataDive has transformed our world. We learned about new tools and questions we didn’t even know that we needed to ask. We actually found some new tools that we can start using Monday.”

Ready to join the Data for Good movement? You can start now by downloading the new Gather IQ™ crowdsourcing community app that uses data to help social causes.