In front of more than 4,500 attendees, and amidst images of the Lincoln Memorial and the US Capitol on the main stage of the Gaylord National Resort and Convention Center in Washington DC, Goodnight gave a quick rundown of SAS’ projects in the queue and the customer-based rationale for each.

Goodnight highlighted how new SAS products and SAS’ work in fraud and financial crimes empower customers in IT, the corner office and government. He touched on SAS’ recent partnership with SAP, born out of requests for SAS’ advanced analytics to run on users’ existing in-memory, SAP HANA platforms.

And for the many customers unloading colossal amounts of data in open-source file system, Hadoop, Goodnight discussed how SAS is integrating seamlessly with the big yellow elephant in the room, creating products like SAS® Visual Statistics and SAS® In-Memory Statistics for Hadoop.

“SAS is a perfect complement to Hadoop,” he said. “Our high-performance and in-memory technologies allow customers to get answers to complex questions faster, no matter how big the data is.”

In keeping with the positive reception customers had to the availability of SAS Visual Analytics in the cloud last year, Goodnight announced SAS Cloud Analytics, a portfolio of more than 35 offerings, available via software-as-a-service and as hosted solutions.

Yet, Goodnight got the biggest response from his announcement of SAS Analytics U, an initiative that will provide select SAS software and select training free to universities in May.

“We want students to experience the depth and range of SAS analytics in their research as well as increase the pool of next-generation SAS users,” he said.

“So spread the word. We’re serious about our educational commitments.”

Goodnight returned twice more during Opening Session – once to demo SAS Visual Statistics and again to quiz Chris Dingle of Rogers Communications on his company’s use of SAS® High-Performance Analytics, SAS® Visual Analytics and Hadoop.

In his Q-and-A, Dingle took Goodnight through the tedious process of acquiring data on Rogers’ 12 million customers from partners like Google and Adobe. They work with file sizes upward of 40 million records per month, with more than 600 traits, he said. All of which are stored in Hadoop.

Once they assimilated the data sets, they needed a way to make sense of it all.

So Dingle and his team asked themselves, "If we wanted to create a really awesome experience for our customers, what are the other pieces of data we can use?" They needed analytics.

A short time later, Dingle and his colleagues attended a conference and met Paul Kent, SAS Vice President of Big Data, who briefed them on SAS High-Performance Analytics.

“Several of us from Rogers in the room looked at each other, and said ‘That is really wicked; that’s cool,” Dingle said.

Now, Rogers is using SAS to understand its customers in a much more concrete way than they had previously. 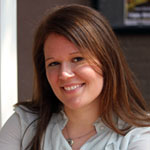 My main goal in life (at SAS) is to make sure employees feel relaxed and self-assured when using social media in their jobs. What’s that look like? A lot of LinkedIn profile audits. An internal blog series called #TipOfTheWeek on topics like time hacks using Buffer. Explaining personal versus professional social media use (and all the gray in between). Teaching is a big part of the job, but my pride and joy is The 140: our training-heavy and platform-light employee advocacy program, comprised of the most impressive and gracious people at SAS. So, what are the things you'll see me post about? Employees, most likely, along with references to my favorite things like Scotland, my beloved Demon Deacons, and a certain dog genius named Oscar.