As the world gears up for the premiere of Iron Man 3, SAS employees are gearing up to find out whether they will get their 15 minutes of fame on the big screen and how much of our beautiful Executive Briefing Center (EBC) is portrayed in the movie.

Folks in the area may recall SAS being selected as a location for part of the filming. What they probably do not know is that SAS was selected to serve as part of Stark Industries, the headquarters for Tony Stark/Iron Man.

Without spoiling too much of the surprise, I can tell you that SAS employees, partners and customers will certainly recognize some very specific scenery on the big screen!

In fact, you may have already seen the promotion stills released by Disney which depict Gwyneth Paltrow (Pepper Potts) and Guy Pearce (Aldrich Killian) in front of the EBC/Building C doors, which were labeled with Stark Industries logos on the day of the shoot.  Or, the other one with Jon Favreau (Happy Hogan) outside of Building C.  It may take a trained eye to recognize the glass doors behind them in these photos, but take my word for it.  They're all outside of the EBC, after just exiting our lobby - which <spoiler alert!> you'll also see in the movie!

So, just how did all this happen, anyway?

As with any movie production, hours of filming can result in mere seconds on the big screen.  But those few moments can be critical to setting the landscape, or providing a critical plot point.  Therefore, the hours spent setting up for those few minutes are no small accomplishment.

According to Sr. Communications Specialist Trent Smith, who was intricately involved in the process from the beginning:

“We didn’t know at the time that they were looking for Stark Industries.”

There were many follow-up scouting visits, which included director Shane Black and other critical people over the course of the project.  “It was quite a crash course in film making to be around them and listen to their conversations,” said Smith. “At one point they were talking about how, if needed, they could shoot the exterior of Building C and then use CGI (computer generated imagery) to make it look like it was on the coast of California. They were just speaking hypothetically. The decision had not been made as to where Stark Industries would be located in the movie, but it was cool to imagine what it would look like!”

Once Marvel had provided a better idea of the complexity and scope of the shoot, we were able to present the idea to SAS CEO Jim Goodnight for consideration.

He approved it, and his reason was simple.

Dr. Goodnight said, "I think the employees would like it."

From there, things began moving at a rapid speed.  Or, as Smith put it, “it was like a 10-ton boulder rolling downhill.”

Pete Flood, SAS Construction Project Manager who managed the logistics for the project, agrees.  The entire process started several months before the shoot and continued for about a month after. "Ilt Jones, Location Manager for Marvel, was great to work with. I made him promise he wouldn’t blow anything up or stain our limestone lobby floors with fake blood," laughed Flood.

Additionally, the SAS team had to find a way to allow the shots that Marvel wanted while still enabling employees and customers access to the building during business hours.  "Originally only a portion of the EBC Parking Lot was to be used to set up food, make-up and wardrobe tents. But, at the last minute Robert Downey, Jr. decided to make a surprise appearance, and we had to overflow into the Building T Parking lot," said Flood of one of the many last minute changes the agile team pulled off.

The weather threw an unexpected wrench into the plans, as well.  It started raining the morning of the shoot, which inhibited the outdoor shots planned for the morning.  So, we moved the after-hours indoor shots to 10AM!  It did clear up in the afternoon and we got the shots they wanted of the exterior later in the day.

It was a tremendous coordination and planning effort behind the scenes before the first famous stiletto stepped onto campus -- from SAS Legal working on the agreement to the incredible efforts led by Trish Dowty, Pete Flood and Jenny Mazurick in Corporate Services and Security efforts led by Rick Grayson, to the many others who helped facilitate all of the intricate details.

We even built upon the opportunity by requesting of Marvel that SAS employees serve as the extras, rather than Marvel conducting their usual casting call for extras in the area. Internal Communications and HR played a pivotal role in making that happen, as did the professionalism of our employees who participated in the shoot.

The entire project - from start to finish - was an amazing organizational and detail-oriented process.

The Marvel folks were quite impressed by the thoroughness and coordination of our people at SAS.

But, in reality, this really should come as no surprise to anyone.  SAS is founded on and operates by a very simple philosophy: 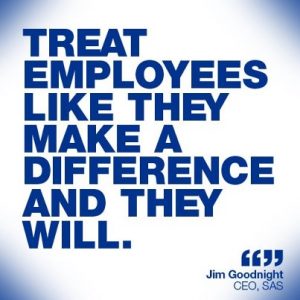 Whether acting as an extra, assisting behind-the-scenes on set or simply watching from an office window, we can all watch the movie knowing that while the efforts behind SAS participation in the movie were complex, the decision to participate wasn't.

Sr. Marketing Operations Specialist Cassie Hannan, who was selected to be an extra, expresses the feelings of many SAS employees when she said:

“I thought it was very generous of Dr. Goodnight to allow such a huge production to take place at our world headquarters for the day. It’s yet another example of how he values his employees by sharing this opportunity with us and understanding how memorable it would be for everyone. It’s a fond memory I’ll have for the rest of my life that I’ll always associate with SAS.”

Learn more about Building C, where the filming for Stark Industries took place.