The average executive at the average company has probably never seen the words “imagination” and “analytics” juxtaposed in the same sentence. There was nothing average about the thirty plus high-impact and high-intellect executives who convened for the Atlanta Power Series. This group demonstrated that there is nothing average about the value that analytics can bring to an enterprise. 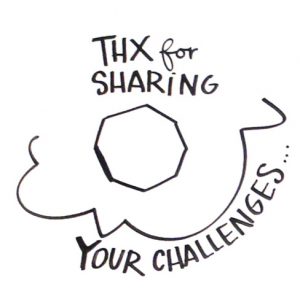 The program commenced with an exercise. Each attendee was given a larger-than-life Post-IT note on which to write their larger-than-life challenge (the thing that keeps them up at night, the most significant challenge facing the enterprise). The challenges were collected and clustered on giant white boards in front of the room.

As the challenges were going up on the board it became apparent that independent of vertical market (consumer products, financial services, hospitality, retail, and telecommunications were represented) the executives in the room shared common challenges. The analytical community needs to become a “band of brothers.” 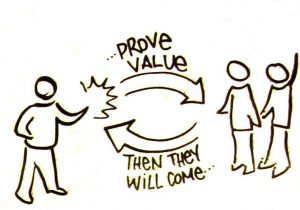 After discussing the challenges and sharing the experiences of the people in the room and the broader community (including research from Bloomberg), the moderator broke the audience into three teams and asked each group to “imagine” that they were going to present “the case for analytics” to the C-Suite. Time was allocated to creating and rehearsing their presentation.

When time was up the audience watched three very different but very effective articulations of why analytics is the way forward in a world where just about every enterprise is competing with everyone, from everywhere, for everything.

I closed the session setting forth the hypothesis that analytics truly is a part of the contemporary zeitgeist. No less a personage than the CEO at Intel, Paul Otellini believes that the “next thing to go obsolete will be ignorance.” I recounted the stories of the perfect game that wasn’t and the goal that did not count:

In 2010, of Detroit Tigers pitcher Armando Galarraga pitched a perfect game – sort of. This is statistically quite significant. Over 135 seasons and tens of thousands of major league games, a pitcher retired 27 straight batters without a walk, a hit, or an error only 20 times.  The umpire mis-called that 27th out, denying Galarraga a place in the history books and causing a national uproar.

Internationally, a similar situation occurred. In the epic World Cup match between Germany and England the English striker kicked the ball into the net – an obvious goal. The quick thinking German goalie, seeing that the official had not seen the ball go over the goal line, grabbed the ball and stepped back into the field of play. No goal. The bad call in baseball and the non-goal in South Africa created such a furor that both sports are introducing instant replays. I interpret this as a faint signal which has broader impact for society and all leaders.

We have reached a point in our evolution as a species where we now require in sports and will soon require in business that all key decisions be subject to “instant replay” review. The question for enterprises in the not so distant future is: will existing decision making processes stand up to this additional level of transparency? Analytics is the path forward. 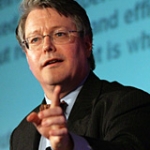 
Thornton May is Futurist, Executive Director, and Dean of the IT Leadership Academy. His extensive experience researching and consulting on the role and behaviors of Boards of Directors and C-level executives in creating value with information technology has won him an unquestioned place on the short list of serious thinkers on this topic. Thornton combines a scholar's patience for empirical research, a stand-up comic's capacity for pattern recognition, and a second-to-none gift for storytelling to the information technology management problems facing executives.