The SIFMA Financial Services Technology Leaders Forum and Expo came to Midtown New York City in mid-June to more fanfare than in the past few years with speakers including Jim Cramer, Art Cashin, Gillian Tett, senior executives from capital markets firms including NYSE Euronext and DTCC, and regulators from the Federal Reserve along with other agencies.

Attendees of past conferences may recall that its primary focus was on technologies that decreased latency for firms to be first to market and first to the money. Faster trading technologies were still on the Expo floor, but from my vantage point, this year’s conference was very different. The light you see at the end of the tunnel is an oncoming train.

The most frequently heard phrase at SIFMA surely was “Dodd-Frank,” as in the Dodd–Frank Wall Street Reform and Consumer Protection Act. Gillian Tett, US Managing Editor of the Financial Times, described the legislation as “a monster, an absolute monster.” Although provisions of the Act addressing more regulations for clearing of OTC derivatives were postponed by the CFTC until December, the industry’s view is that the train is close to causing a big wreck. The approximately 250 new rules for Dodd-Frank will drive new operating models at capital markets firms. That will have a big impact on technology and operations.

As a speaker from JPMorgan Chase described, “Dodd-Frank all depends on [your firm’s]gap analysis, and how well architected and documented your systems are.” The key question firms need to ask, according to one panelist, is “how well is a firm able to quickly provide data for testing and for additional data requests.” That question will surely come from regulators.

The second train “a-coming, coming ‘round the bend,” is the yet-to-be-stood-up Office of Financial Research (OFR), which will be setting standards for financial services industry identification (the LEI or Legal Entity Identifier) and will, according to Richard Berner of the agency, “produce and publish key financial data.” And where will that data come from? You guessed it – the industry. And yes, it will no doubt take a virtual train to haul back all the requested data.

Why are Lago’s buildings all painted red?
In the movie High Plains Drifter a small western town was repainted and renamed as part of the story. Perhaps it’s a bit of a stretch, but I see it as fact that the level of regulatory uncertainty from Dodd-Frank and Basel III has senior leaders of capital markets firms seeing red because so much is up in the air. The result of this regulatory uncertainty may well lead to business uncertainty and slow reaction times in the segment of financial services most known for speed of action.

A deluge … of data
Discussion about data management and data integration permeated the conference with panelists agreeing that techniques to handle Big Data (petabytes) will be needed to address near-term and future regulatory requirements. A panelist cited an example of 90 million FX (foreign exchange) messages per day growing to 4 billion messages per day by the end of 2011.

Concern over Dodd-Frank was cited as a reason some firms are planning to keep all event data for seven years so that they could respond to future regulatory requests (or demands?). However, the explosion of data (and therefore the need to manage it) isn’t just for regulatory compliance. One panelist spoke about the combination of relational data, unstructured data processed in Hadoop, and mobile data combined with geolocation as “creating huge vapor trails.” This idea delivers on the promise of both transparency coming from technology and the idea that firms can make money from the pool of Big Data even with lower trading volumes and the resulting lower revenues.

How will money be made in capital markets? TABB Group says it will be made in part from better quantitative research and strategy development. Or, as speaker Alfred Berkeley, Chairman of Pipeline Trading Systems noted, “Predictive analytics is the next step up in the arms race.” My view is that the clear and critical need of capital markets firms to collect, manage, integrate, predict, analyze and report from Big Data is squarely in the sweet spot of our firm, and that with solutions from SAS, firms can have (to borrow another phrase) The Power to Know. 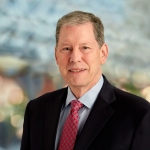 David M. Wallace is responsible for defining industry strategy for the global banking and capital markets segments and midmarket strategy across banking, insurance and capital markets. He has over 35 years of experience in the application of information technology to solve customer needs, including a 25 year focus on the financial services industry.