After a marathon of a season, 162 games in each team's schedule to be precise, the stakes for Major League Baseball are higher in October, and postseason play is underway. Whether it's the renewal of an old rivalry, redemption for last year's runners up, or rooting for this season's breakout rookie sensation, baseball fans have plenty to cheer for each fall. In addition to being a celebrated American pastime, baseball is a sport whose structure lends itself to many flavors of statistical analysis.

This article demonstrates how you can use SAS to quantify past years' batter versus pitcher statistics. You can use these historical trends to highlight the matchups to watch out for this postseason. The article also lays the groundwork for solving a lineup optimization problem. This problem is of great interest to fantasy buffs, hobbyists, as well as actual MLB managers!

One abundant source of Major League Baseball data is the event files archived by season at Retrosheet.org. The code below assumes that the files for each year of interest YYYY have been downloaded and extracted into a subdirectory called YYYY. Each event file (one per team, per year) contains game event logs for all home games of a particular team in a particular season. Events recorded per game include information about starting rosters, substitutions, umpires, and game conditions. In addition, they keep a record of every play-by-play event in the game.

Because of the intricacies of baseball score keeping, a detailed notation is used to describe what happened in a baseball play. For the purpose of this blog, however, you can greatly simplify the game data by simply determining whether a particular at bat ended up with a hit or with no hit. Using a regular expression, you can parse this result string to determine which at bats resulted in a hit, and which did not.

Note that many events are neither positively nor negatively considered when computing batting average -- walks and hit-by-pitch, for example -- these events are ignored for this analysis.

To do this, you can parse the raw data as follows:

As you read through the file

After producing a data set of hit/no-hit outcomes, you can aggregate these data to produce one observation per batter-pitcher pair. For example, you can aggregate the number of at bats "ab" and the batting average "avg". To limit the analysis to players in the 2019 playoffs, here is a roster data file. You can use this file to create a data set containing the 25-player active roster of each playoff team:

Next, the following macro aggregates batter-pitcher matchup data for a particular list of MLB players.

Taking a quick look into the data

Now, for the analysis: you can invoke the macros

and inspect the data

Next, you can use the following statements to see all the historical batting averages of the key batter-pitcher matchups. To avoid noise from tiny sample sets, you can filter out matchups with fewer than 10 at bats. In the generated heat map visualization, red corresponds to higher batting average and blue corresponds to lower batting average. Since the National League and American League teams play each other infrequently, it is helpful to show them one at a time. Here are the National League matchups: 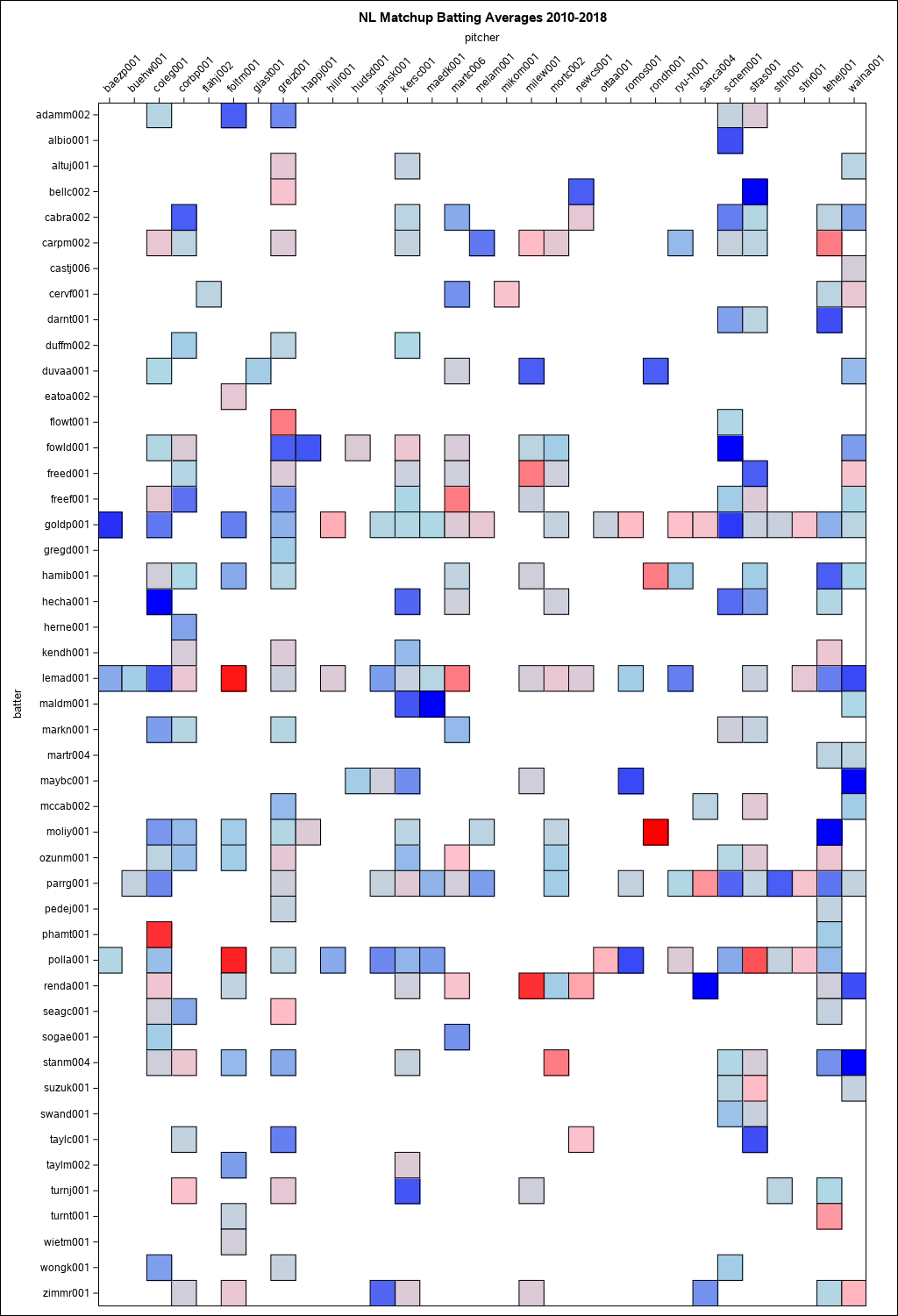 and the American League matchups: 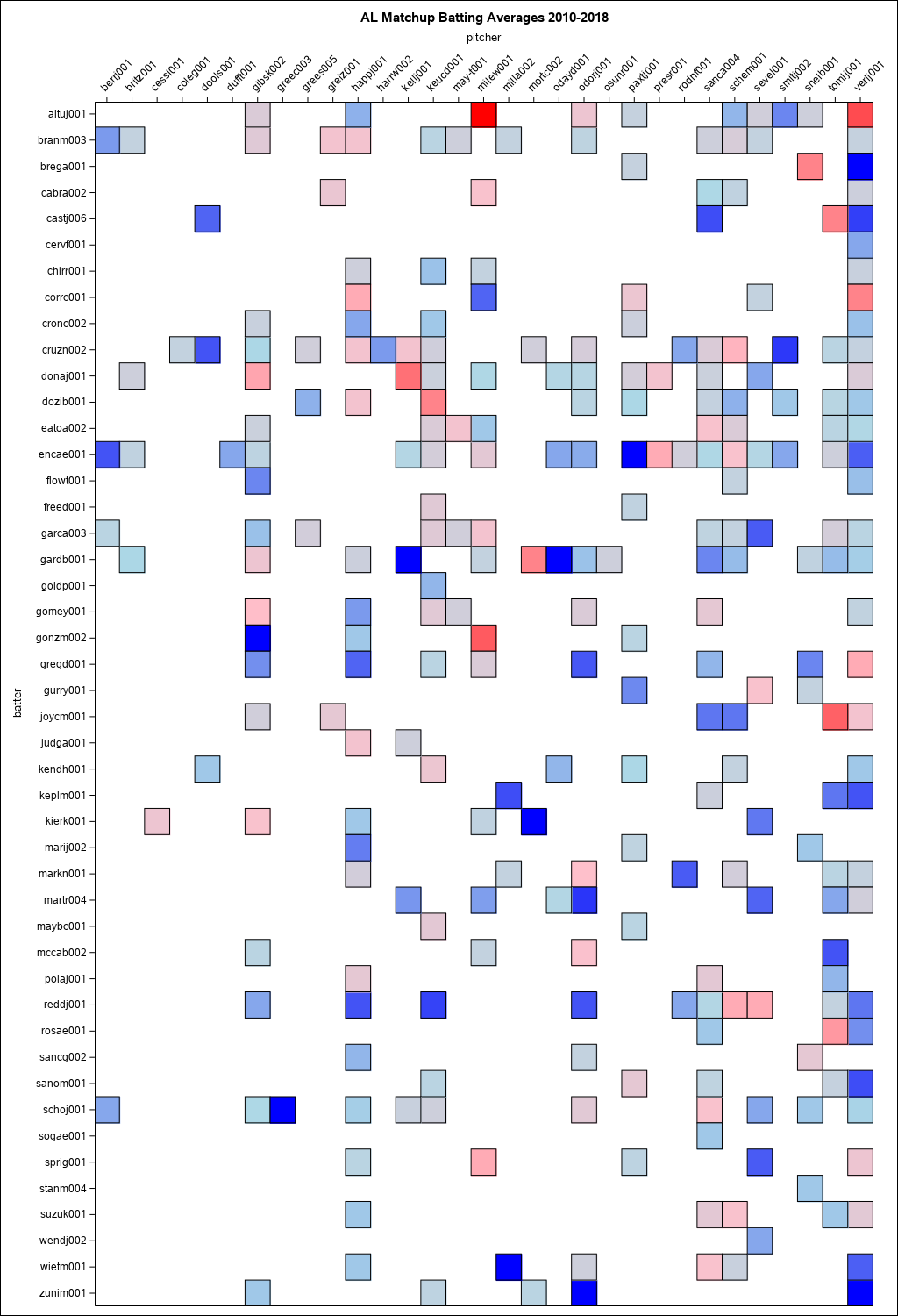 Noteworthy matchups from the heat maps include:

So, how have these actually panned out? Alex Bregman faced Blake Snell in game 2 of the ALDS. Bregman had 1 hit in 2 at bats including a home run off Snell! Goldschmidt never got to face Baez, as the Dodgers didn't make it out of the NLDS. Yuli Gurriel was hitless in 4 at bats against James Paxton in the ALCS. Anthony Rendon won't get to face Wade Miley since the Astros have not included Miley on the World Series roster.

Baseball managers have often criticized batter-pitcher matchup data because of their poor predictive power. This is typically due to very small sample sizes. In a future post, I will analyze this data using collaborative filtering, a machine learning technique that will help address the problem of small sample sizes. From there, I will explore ways to optimally choose a lineup of batters to face a particular pitcher. On an introductory level, this series of posts will demonstrate an end-to-end approach to lineup optimization.

Brandon Reese develops network algorithms in the Operations Research department within the SAS Analytics R&D division. He began working at SAS in 2018 and focuses on the intersection between graph algorithms and machine learning. His postsecondary degrees include a B. S. in Aerospace Engineering from Massachusetts Institute of Technology and a Ph. D. in Mechanical Engineering from Florida State University.