Super Bowl 50 (L?) is this Sunday, so it's time for another (American) football-related post. Steven Miller, a mathematics professor at Rutgers University, recently noted that the 2015 NFL schedule allowed a competitive advantage for some teams (including the Carolina Panthers). This figure he generated displays the 2015 regular season as a graph: 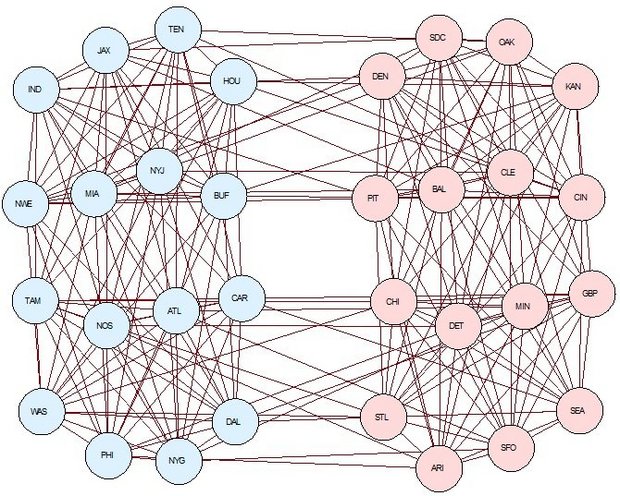 In the graph, each of the 32 NFL teams is represented by a node, and there is a link between two nodes if the two teams played each other in the regular season. Miller's layout shows that in 2015, the 32 teams can be partitioned into two sets that have only 32 links from one set to the other, and this number is abnormally low. The effect is that if one side contains a set of weaker teams, the other teams on that same side benefit by having weaker opponents. Usually, the scheduling is more diverse so that this situation does not happen.

One way to look for this is to solve a minimum cut problem on the corresponding graph for each year. SAS/OR provides a minimum cut algorithm both in PROC OPTNET and in the network solver in PROC OPTMODEL. The required input data is just a set of links, each with a weight that represents the number of times that pair of teams played each other. The first several observations are shown here for 2015: 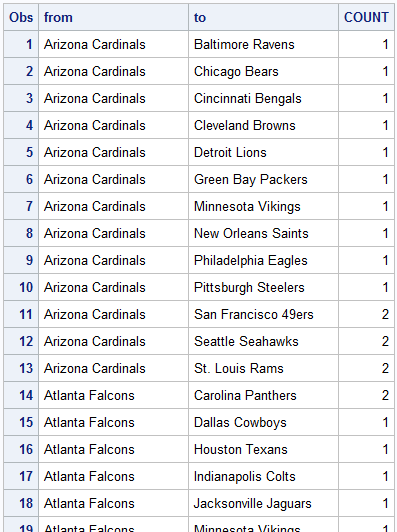 (By the way, this analysis does not depend on who won each game, so you can also look for this anomaly before the season even starts.) You can solve the minimum cut problem as follows:

It turns out that the resulting minimum cut has value 16, but this cut is trivial in the sense that it has only one node on one side and the other 31 nodes on the other side. The links across the cut have total weight 16 because each team plays 16 games, and this same thing happens every year.

In order to detect what distinguishes the 2015 schedule from other years, you can solve a related problem: the balanced minimum cut problem, also known as the uniform graph 2-partition problem. The idea is to split the nodes into two disjoint sets, still minimizing the sum of weights of links that cross from one set to the other, but now you want the two sets to have the same number of nodes, in this case 16 nodes each. You can solve this problem by using the mixed integer linear programming (MILP) solver. The formulation involves two sets of binary decision variables:

The following PROC OPTMODEL statements read the data, formulate the problem, call the MILP solver for each year, and output the solutions:

Notice that, because the problems for different years are independent, you can use the COFOR statement to solve these problems concurrently, resulting in 4x speedup on my 4-core laptop. The syntax is nearly identical to the (serial) FOR statement, with just one keyword change.

The resulting output shows that, besides 2015, the 2012 schedule suffered from a similar anomaly:

Enjoy the game on Sunday (or the commercials, depending on your preference).