Last year, my SAS Simulation Studio R&D team began a discrete-event simulation modeling project of a neonatal intensive care unit (NICU) with two doctors from Duke University’s Division of Neonatal-Perinatal Medicine.  After several initial meetings discussing such things as necrotizing enterocolitis (NEC), retinopathy of prematurity (ROP), patent ductus arteriosis (PDA), and other morbidities that premature infants are susceptible to, I began to realize just how exceptional a person must be to be able to face the everyday realities of premature infant care. 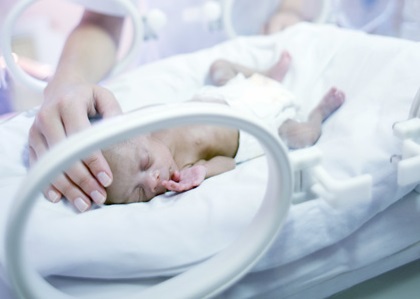 The NICU at Duke is a level IV NICU, which means they are equipped to treat the most critically ill newborns.  On average they treat about 800 babies per year and of those, about 35 will die.  The medical director of a NICU faces unimaginable administrative challenges in meeting the critical-care needs of up to 68 patients at any one time---all of whom are babies, ranging from hours-old premature newborns weighing less than a pound to months-old infants weighing 10 times as much as their neighbors.  In addition, administrators must plan for their NICU’s future, plotting a course for growth and development.  In order to staff the Duke NICU for a 24-hour time period, the following are required:

This amounts to hiring almost five times as many providers overall as are required to cover one 12-hour shift, and clearly, by far, the biggest requirement is the nurses.  Accurate scheduling of nurses per shift is crucial in optimizing the balance between cost and quality of care.  Hiring additional nurses is not a decision Duke can take lightly.  To add one nurse to a shift, it costs approximately a half a million dollars (because adding one nurse per shift actually requires hiring five nurses).

The hope is that a simulation model of the NICU will help medical administrators answer important business questions, such as the following:

Other benefits of using a simulation model to study the operation of their NICU include improved patient safety (through appropriately resourcing the unit) and better employee satisfaction (through improved predictability of nursing assignments and reduction of stress associated with understaffing).

SAS Simulation Studio 13.2, which is part of SAS/OR, was used to build the discrete-event simulation model of Duke’s NICU.  The “entities” that flow through the NICU model represent patients, and each patient entity has properties, or attributes, that include gestational age (GA), days of life upon arrival, and acuity (a measure of how sick a patient is and thus how many resources are required to provide appropriate care).  These patient attributes are sampled from distributions that were estimated from historical data provided by Duke.  Below is the estimated historical distribution of gestational age (in weeks) at birth for babies born at Duke. 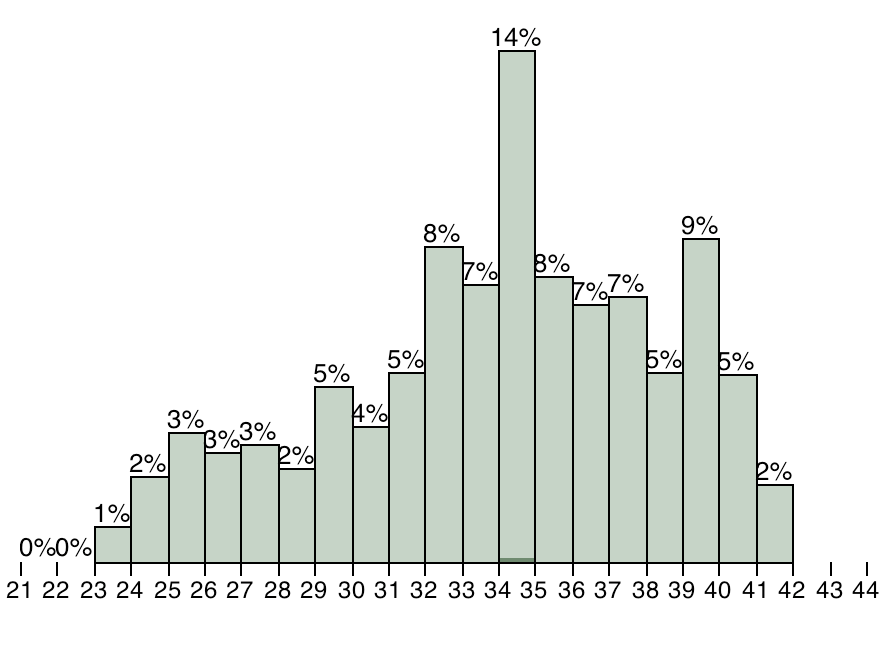 Other inputs to our model include estimated probability distributions for the number and type of admissions per day, as well as the probability (based on gestational age) that each simulated baby will develop one of five major morbidities that are known to affect the length of stay (LOS) of NICU patients.

In our simulated NICU, we model the flow of patient entities through the NICU over a one-year time period.  The constraints in our model include the number and type of beds (critical-care or step-down) in the NICU, the number of beds available for transfer patients on each simulated day, and the number of nurses.  Shift changes occur every 12 hours, at which point nurses are reassigned based on a recalculation of each patient’s acuity.  Each nurse can take only as many patients as the acuity level of his or her most acute patient (up to three babies).  Admissions, crashes (a sudden deterioration in the clinical condition of a patient), and deaths can occur at any point during a shift. At the end of each shift, all patients that meet the minimum requirements in terms of age and acuity are discharged from the unit. Some patients may also be transferred out of the unit to another hospital, depending on the number of available transfer beds.

Below is a table containing response values for a one-year time period from our simulated NICU using 26 nurses (obtained by averaging the results from 50 independent runs) and the actual data from the Duke NICU (averaged over a five-year time period from 2008-2013).  The average daily census response for the model is the time-averaged number of patients in the NICU over a 24-hour time period. 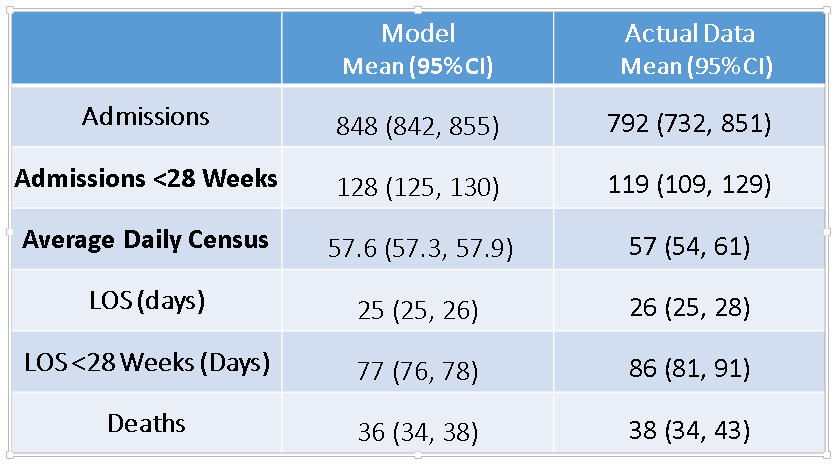 From these data, it is evident that we have been able to successfully model the current operation of Duke’s NICU.   This critical first step provides detailed insights into the present state for NICU managers. We are continuing to work with this model and use it to study how changes in the unit’s physical structure (number and type of beds), staffing, referral patterns, or patient mix will affect the NICU in a future state.  For example, the above table shows the results for a simulated NICU staffed by 26 nurses per shift (this is close to the actual staffing level at Duke over the five-year period studied).  We also ran the simulation model using 30 nurses to demonstrate the effect of adding 4 nurses per shift.  The daily census increased from 57.6 to 60.8 on average and yearly admissions increased from 848 to 879 on average.  Such information, combined with the NICU’s proprietary cost information, can be used by the NICU’s management to study how the unit should be staffed for growth.  With further variation in the inputs, a manager can determine in a cost-effective manner how many additional nurses to hire for each bed added during a growth phase, as well as how variations in bed allocation (such as adding more step-down beds versus adding critical-care beds) affect the flow of patients over a week, a month, a year, or a decade.

This model can also be used to study the potential impact of projects designed to decrease the rate of morbidities, such as NEC, ROP, and PDA.  In particular, if Duke is able to decrease their rate of NEC, ROP, and PDA by 50% each, then this model could be used to predict how many fewer babies die, the amount of money the unit will save, and how many more babies the unit will be able to care for as a result.  Look for a future post on a comparison between units designed with the best and worst outcomes (in terms of morbidity probabilities).

It is also important to note that although this discrete-event simulation model is based on the Duke NICU, it can easily be applied to other level-III or level-IV inborn NICUs across the country after modifying a few critical variables that are unique to an individual NICU, including number of beds, number of nurses, transfer patterns, and admission distributions.  In fact, this same modeling approach can be applied to almost any unit in any hospital as long as there is a clear understanding of the inputs to the model, especially those that drive the length of stay of a patient.  If you would like to read more about this project, you can access our SAS Global Forum paper here.  Or if you are planning to attend the Winter Simulation Conference in Savannah, Georgia next week, then you can come see my presentation on this project in the case studies track.