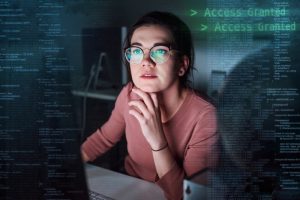 Artificial intelligence evokes high hopes. It can streamline processes, improve quality and eliminate the potential for human error. Along with the hopes come the fears, however. Is AI a threat to humanity? Whom will it replace, if anyone? How can we deploy it ethically? We spoke to the SAS Head of Data Science for UK and Ireland, Dr Iain Brown. He has talked about these topics in a recent virtual event for organizational leaders, Artificial Intelligence and the Ethics Mandate, organized by Forbes in collaboration with SAS.

Iain reminds us that AI is already with us in workplaces, home life and leisure. Three-fourths of global consumers use services or devices with embedded self-learning machines. Algorithms choose the news we see and suggest entertainment for us.

“Science fiction warns of rivalry between humans and their robot creations," says Iain. "In reality, we press a button and watch with satisfaction as a cleaning robot gets to know every corner of our homes. There’s huge value to be gained from these new technologies, even in the office and on the factory floor. We are already giving in to AI in many ways.”

There are students and academics, C-suite businesspeople and data scientists for whom AI technology is not futuristic but a day-to-day reality. SAS arranged a series of focus groups to discover their thoughts and feelings. Iain, who took part in the discussions, reports that they had varied opinions, even within the groups themselves.

One topic came up in every group: job losses due to AI-driven automation. Headlines often suggest that multinational organisations are to replace workers with robots. But those who actually work alongside the technology don’t believe in widespread AI-induced unemployment.

“Most participants thought AI would create more jobs than it replaced," Iain says. "However, there was little agreement on the duration, severity or consequences of job losses resulting from AI in the short term.”

Younger participants tended to be more pessimistic about their future prospects. They anticipated a significant rise in AI-enabled inequality and a breakdown of social cohesion. Some feared that the powerful technology being placed in the hands of a few could result in a much greater divide between those with power, wealth and influence and those without.

“Although the consensus was not perfect, the message from the AI users was clear: workers have little to fear from AI," Iain says. "The reason for this was simple. Even in an AI-driven future, humans would remain a valuable commodity worth investing in. They would continue to deliver value that machines do not.”

As several of the professors and data scientists informed him, we are still a long way from the "general intelligence" so often portrayed in science fiction. Despite the hype, we design most AIs to be very good at solving a specific problem and within very particular parameters. Introduce a variable, and the system breaks down – or you need to create a new model.

A new source of employment is emerging

Human creativity, insight and contextual awareness are key to making AI work. The technical executives in the C-suite told the participants how they ensured close monitoring and supervision of any autonomous processes by human employees.

“They said that AI solutions with hidden internal workings weren’t worth the risk, due to a lack of transparency and explainability,” Iain emphasizes.

These new validation roles have started to emerge only recently. Based on what he heard in the groups, Iain expects the processes where employees review, understand and resolve AI decisions to be a massive source of employment in the future.

“Like any piece of software, the quality of AI insight depends on the quality of the data you feed into it, and it takes a human to know and judge what is good for it,” he says.

Our job roles are changing for the better

The world of work is changing at an exponential rate as technology leads the way towards capabilities the previous generation would never have considered possible. How many social media managers or app developers did you know 10 years ago?

“Each generation, new technologies replace manual work in a new way," Iain says. "Now it is AI’s turn to take on that role. I don’t think AI will replace us. Instead, it will introduce a new working world in which our job roles are changed for the better. The future will be defined by humans working together with AI – not as enemies.”

In his opinion, intelligent machines will increase efficiency by their systematic way of working, but without imitating or replacing humanity. We are far too creative, unpredictable and valuable for that. AI will leave us more time to reach our best potential. 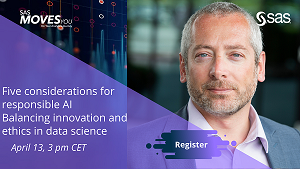 Want to learn more about how to mitigate the risks of potential AI misuse? We will discuss the risk of human bias, the explainability of predictions, decisions made with machine learning algorithms, and the importance of monitoring the fairness and transparency of AI applications in an upcoming webinar on April 13. Register here! 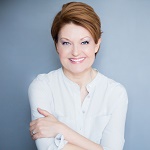 
I work as a content and communications professional in EMEA region helping customers find marketing insights with analytics.