Recent high-profile money laundering cases haven’t just attracted the attention of the media and damaged reputations – they’ve led to significant penalties for the banks involved. For example, one UK bank was recently fined over £37 million for its compliance and internal control failings.

The introduction of the EU’s Fifth Money Laundering Directive (MLD5) in January 2020 shows that regulators are increasingly eager to tackle money laundering at a systemic level. While MLD5 itself requires only relatively small-scale changes to existing compliance processes, it’s part of a broader trend. Regulators are issuing new directives more frequently than ever before as they attempt to keep up with the pace of innovation in money laundering techniques and technologies.

It's not just about AML

As a result, banks will need to become more agile and evolve their anti-money laundering (AML) capabilities faster to stay compliant. But it’s not just the AML team that needs to worry about criminals becoming smarter. Fraud prevention teams are facing similar pressures.

In the wake of the COVID-19 pandemic, more customers than ever before are banking online, including older people and others who may not be as comfortable with technology as existing users. These customers are potentially much more vulnerable to online scams, malware and other cyberattacks. This means fraud prevention teams are likely to face a significant increase in caseload over the coming months.

AML and fraud prevention teams tend to sit in different parts of the organisation. As a result, their paths don’t often cross. Yet in many cases, they’re doing similar types of analysis and even investigating the same people. Money laundering and fraud often go hand in hand, and when you detect one, it’s often an indicator of the other. In fact, the US regulator FinCEN now requires banks to submit a suspicious activity report (SAR) for any fraud case where losses are over a certain threshold for money laundering investigations.

While the specific goals, investigation methods and analysis techniques of each discipline differ, both can benefit from sharing information. However, due to the siloed organisational structure of most large banks, there is usually little coordination or collaboration between the two. This is a specific example of a wider problem in banking. Each department has its own technology, data and processes, which makes it almost impossible to get a 360-degree view of the bank’s relationship and interactions with any individual customer.

In the long term, most banks aim to break down these internal boundaries and silos and gain full transparency within the business, but that’s a huge project, and Rome wasn’t built in a day. However, looking at goals for the next three to five years, it’s realistic to envision greater alignment between functions where there are evident synergies. The convergence of fraud prevention and AML would be a good place to start.

At SAS, we’re working with both AML and fraud prevention teams at banks around the world to capture, analyse and act on vast quantities of data in real time. We’re using machine learning models to identify connections and patterns in customer behaviour that banks simply cannot detect with traditional methods. We’ve seen how AML and fraud analytics can complement and strengthen each other, if they’re given the opportunity. And we’re excited about the possibilities of using our platforms to bring these two vital business functions together.

If you’d like to learn more about how SAS can support AML and fraud prevention teams, you might be interested in our recent webinars: Making Next-Gen AML a Reality With AI and Machine Learning, and for ACFE members, Addressing Evolving Financial Institution Fraud in Extraordinary Times. And if you’d like to discuss any of these topics further, feel free to reach out to me on Twitter or LinkedIn, or email me at caroline.hermon@sas.com. 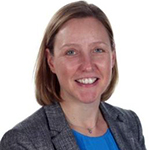