When we are admitted to hospital, we have confidence in the system and the doctors; we trust that they will do everything to cure us. Yet some patients become more ill while they are hospitalised because they acquire an infection – and in severe cases, some of them die of this hospital-acquired infection. This is not what we expect as citizens. In Denmark, we have confidence in each other, and for that reason we cannot afford breach of confidence.

It should be safe to be admitted to hospital. However, the issue is complex. The main challenges cannot be solved solely by washing hands more frequently, cleaning better or offering patients private rooms. The solution to the problem is hidden in data, and thus quick data analysis will become important in the future for public hospitals. By using artificial intelligence to quickly identify patterns in the data, undesirable hospital-acquired infections can be prevented with targeted, cost-efficient initiatives.

The solution to the problem is hidden in data, and thus quick data analysis will become important in the future for public hospitals.

The Region of Southern Denmark is showing the way

By using artificial intelligence to quickly identify patterns in the data, undesirable hospital-acquired infections can be prevented with targeted, cost-efficient initiatives.

Today, patterns identified by artificial intelligence are used as a basis for decision making to prevent undesirable hospital-acquired infections. In other words, SAS® software does not provide solutions, but decision support for both clinicians and management on which they can act.

The fact that the Region of Southern Denmark has embarked on the use of data in this way has struck a chord across Europe, and it is remarkable that a Danish region has taken this step.

In the near future, Clinical Director Peder Jest at Odense University Hospital and Professor Jens Kjølseth Møller at Sygehus Lillebælt will present their solution at our large international analytics conference in Milan. Here, curious innovators working systematically with the use of data meet to exchange and present their knowledge and their experience within new technology-driven innovation.

The two Danish doctors expect to be able to share their experience with participants from both Europe and the US. The interest in the work of the Region of Southern Denmark is strong, and at the conference it is possible for participants to book meetings with the Danish innovators.

The news about the Region of Southern Denmark’s innovative step has also reached the Danish parliament at Christiansborg. In a SAS press release published 17 September, Minister for Public Sector Innovation Sophie Løhde said, “We need to be better at utilising such solutions in the public sector.” 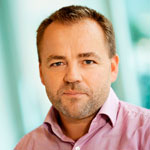 
I have always thought that the healthcare area is exciting. I hope that with my commitment and insight in the area I can contribute to the use of data playing an even greater role in the future. I think we must be better letting the data form the basis for our decisions, this goes for the hospital, department management and hospital staff. I have the privilege to work for SAS Institute as a Director in Advisory Services, Nordic Health Care. I am in daily contact with management and staff at hospitals in the Nordic countries. I work to help them solve their challenges to improve, for example, their patient perceived quality or patient safety in their hospital.