With the wide spread Moneyball success story you may think this question is already answered.  I for one used to think so. However, after I’ve enthusiastically tried to use the Oakland A’s success story as a metaphor and inspiration for applying analytics, with mixed success, I think it’s worth elaborating just a little on “Why”. What is really the reason for sports to embrace analytics?

Recently I discussed the current analytics trend in sports with one of the most successful players and GMs in Swedish Hockey. We spoke about the emergence of “sports analytics” and “fancy stats” and how “Corsi”, “PDO” etc. have started to become widely used terms in the world of hockey. I asked “With all your past experience and success, what’s really your view on this new hype?” Without hesitation he said: “What will help us become successful in the future? Practice even more? Double the off-season time in the gym? I don’t think so. The answer has to lie in understanding what really makes a difference, that’s what I expect analytics can do for us.”

To understand what makes a difference

Meeting that expectation, that’s what analytics did for the UK Olympic rowing team. Helping them understand what really makes a difference, helping them always give a fact based answer to their ever present question “Will it make the boat go faster?” When I a couple of weeks ago had the privilege of listening to Ben Hunt-Davis, one of the UK Rowing gold medalists from the Sydney Olympics, he explained what made them go from a championship participant to a Champion, from being a contender to becoming a winner.

Ben’s story was as expected about determination, focus, and their willingness to “give it all”, to take and accept the pain associated with the road to success. For years he and the team practiced ruthlessly, 49 weeks of the year, up to 21 sessions a week. For years they pushed on, convinced that if they just worked harder they would in the end succeed. What they found was that they did indeed deliver very consistent results, but finishing 6th to 8th in international competition, year after year, was not the result they were aiming for.

So Ben said they had three options. They could keep on and get the same results. Or they could simply give up. Or, they could take a step back and start looking at things in a very different way. A way to get a different result. They decided for the latter. And in the end they went from trying harder to practicing smarter. From doing more of the same to doing the right things. Using an Analytics approach helped the team to see beyond the results, it helped them measure the performance, and more importantly, to understand the correlation between performance and results. It gave them a more fact based answer to their ever present question “Will it make the boat go faster?” On the starting line of the Sydney Olympic final their boat held the youngest, least fit, least experienced rowing team, but that boat with that team was the first to cross the finish line, giving UK that gold medal again for the first time since 1912. Analytics raised their probability of winning, it changed the odds in their favor.

To change the odds in your favor 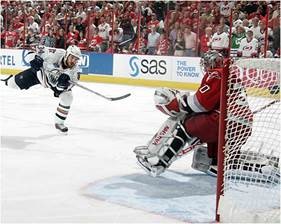 This very same approach made Detroit Red Wings’ team captain Nicklas Lidström the world’s best ice hockey defenseman, winning four Stanley Cups, the Olympics, World Championship and voted NHL’s best defenseman seven times. Anyone could see he wasn’t the strongest, not the most technical, not the hardest shooter, best tackler or swiftest skater. His road to success was to understand the odds in playing every single situation so he could minimize the opposing player’s potential, to know the odds of different choices before going out on the ice. Analytics. Not until after his career was this approach documented. And not just documented, the findings came out as a first scientific article by PhDs Carl Lindberg and Jan Lennartsson with Lidström as co-writer, explaining how the so far intangible term “game intelligence” can actually be put into the realm of science, something that can be explained. And how it can be put into practice.

So then, the answer to “Why” is raising the probability of winning? Yes. But I would maybe claim that there’s an even more important reason why sports should embrace analytics. I believe it can be of even higher value to make sure to take fact based decisions when losing. When results are poor, emotions go high and media, sponsors, fans and board members all have (different) opinions on what needs to change. When this storm influences and even drives big decisions around firing and hiring of coaches and players. Without having embraced analytics this is where things can really go overboard. For two losing teams there’s a big difference between one that continuously evaluates and communicates performance and how it correlates with the results and one that looks solely on results.

From the top of my head I can think of at least two recent team examples where it did go overboard. But I also know of a sports team that is in the midst of a losing season and normally would have been the victim of continuous internal and external opinion storms, but they’ve stayed on course, knowing that this is a journey. One of the coaches expressed how they would never have managed to keep out infected opinions and energy drains, keep up the team spirit and the aim going forward if they had not stood on analytics. Analytics giving them facts and understandings of their performance, how it relates to the results and thereby giving them the understanding what to change and work on to improve their results over time.

So there lies the answer to the headline’s “Why”: To understand the relationship between performance and results over time in order to stand firmly on the foundation that the decision taken in a given situation was the best possible.

And by the way, if you’re not in sports but have a role in business or public service, this same answer to “Why embrace analytics?” applies. To know that the decision taken in a given situation was the best possible.

Why Sports is the ultimate arena for Analytics

Analytics is a team sport at Team Sweden

What demand planners can learn from Sports Analytics

How Sports should engage with Analytics