If you are involved in Analytics, you already know that there are some key areas to be aware of in order to achieve results. Over the last year and a half I’ve found that some of those things make Sports a really intriguing and exciting, not to say the ultimate arena for Analytics. At least if you believe that working against difficult conditions improves your skills, understanding and capability.

The more data the better. It’s as simple as that.

Those of you who noticed that the Swedish National Hockey team “Tre Kronor” brought in a data scientist, Jon Blomqvist, to prepare for the World Cup you may recall that the analysis of all players going in to the tournament was based on 1230 games, 1,000,000 shifts and 400,000 events. That’s a reasonable amount in order to get an overall understanding but actually not very much. In reality sports data is really limited, and rather basic by nature. To work with this and still bring out relevant and statistically significant results is a challenge. 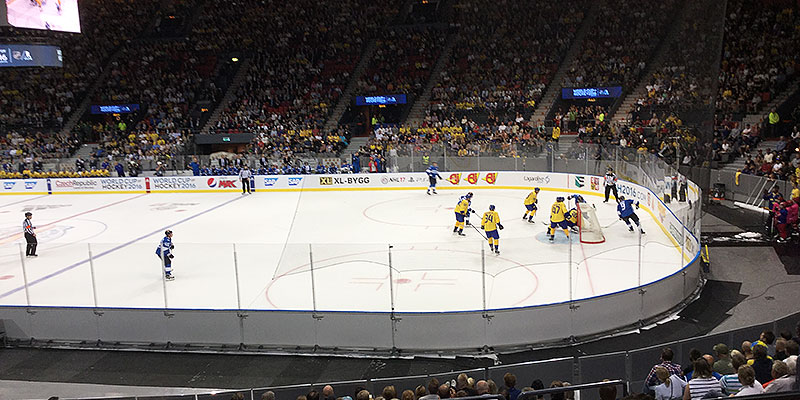 In normal business it doesn’t have to be perfect to qualify as a success. As long as there is improvement it will be noted and rewarded. Even smaller improvements of underlying key metrics can lead a long way to achieve consistently better end results. E.g. a couple of %-age points better sales forecasting, a “hit rate” improvement of a promotion campaign, or avoiding 3 out of 5 unplanned shutdowns in process production, all these can easily yield great returns.

In sports success is binary. There’s no room for error.

There’s no room for even a single bad situation that in the end turns out to determine the outcome of that game. Total success or total failure are the only possible outcomes. As in Team Sweden’s overtime loss to Team Europe in the semifinal when the puck bounced “the wrong way” due to an unfortunate sequence of four events in as many seconds and lead to Europe’s winning goal. When that happened all previous achievements counted for nothing. Sweden winning the preliminary round-robin group to clinch the semi final spot, going undefeated during regulation time and beating Russia for the first time in 12 years was in the end of zero value. The margins in sports are razor thin, one bounce is all it takes to determine success or failure. Just ask any fan of Chicago Cubs or Cleveland Indians…

Since success is binary, so are emotions. The winning team is in the skies, the losing team is devastated. Not to mention the fans or media. Following Team Europe’s overtime win over Sweden in the semi-final the Swedish Tabloid Aftonbladet called it “A gigantic fiasco” (article in Swedish). And where emotions take over, rationale goes out the window. In that article the sports expert journalist Mats Wennerholm further down in his “analysis” comes to his conclusion of the casual factor: ”I don’t know what went wrong, but a feeling is that Rikard Grönborg lost himself in too much statistics…”. Notice the words “don’t know” and “a feeling”, a better description of “gut feel” is hard to find.

Especially when it leads to claiming that “too much statistics” increases the risk of failure. It’s like saying “the less reliable your information is, the better decisions you make”.

Anyone working with information knows that following information comes “decision”, then “execution” followed by “evaluation”. In other words, information in itself can never be a liability. And more importantly, as the following decisions and executions are evaluated, the combination with that exact information will lead to new insights that in turn will drive new improved information. 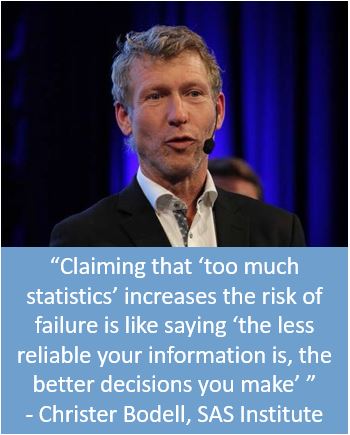 But wait, there’s more. As I was recently talking to an analytics driven hockey coach about the challenges above he commented: “Yes, and add to those things that this is an environment that has a really hard time to accept numbers and stats, simply because they don’t understand them”. So here’s a fourth one:

The value of executive sponsorship for an initiative in any organization cannot be overrated. Without backing from the top it’s going to be really uphill no matter what you come up with. Sports is emotion-driven and certainly does not qualify as a leader when it comes to being an analytics-driven culture. That said, there are exceptions, as I pointed out in my pre-World Cup blog, Rikard Grönborg’s understanding and mindset towards analytics is something I would recommend any leader of an organization. As he explains in this video he understands the contribution of “cold” Analytics in synergy with all the “warm” knowledge that exists in the minds of a professional coaching staff. We will see more of this in the near future, but for now the culture generally still is more a challenge than an asset.

So then why do I think it’s such a great idea to drive analytics within Sports when everything is stacked against it? Why would I choose to be involved here where it’s so much harder?

I’m thinking: if we can find ways to make a difference here where data sample sizes are (still) relatively small, margins razor thin, emotions sky high and there is a weak Analytics culture; then just imagine what we can contribute with in our organizations and businesses where these conditions are so much more in our favor.

Or as Frank Sinatra phrased it: “If I can make it there, I’ll make it anywhere”.

So if you’re up for the challenge, jump right in.

Why sports is the ultimate arena for analytics

We hosted a digital panel discussion on Twitter covering this theme. Read the #saschat summary here: Why sports is the ultimate arena for analytics