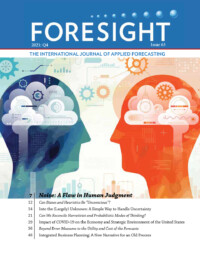 Following is editor Len Tashman's preview of the 2021-Q4 issue of Foresight: The International Journal of Applied Forecasting.

Adopting the idea from other journals that recognize outstanding contributions to the field through best paper awards, we are pleased to announce that Foresight has established its own Hall of Fame to honor standout articles printed in our pages. The initial selection features papers from our first 12 years, 2005-2017. Nominations of several dozen articles came from the IIF membership, followed by a vote of the HoF selection committee. Ultimately, we inducted five articles from this period, as well as one discrete series of articles. The HoF authors were also honored with a cash stipend of $500.

We’re delighted to preface this current issue of Foresight with a listing of the winners along with a reproduction of the key points of those papers. Of course, you are welcome to read the HoF articles in our back issues, available for free download.

Behavioral economics has infused the forecasting profession, playing an enlightening role in recognizing “misbehaviors” in the forecasting process. A perpetually cited example is the silo mentality manifest in functional areas of the business. In Issue 13 (2009) of Foresight, John Mello described the dysfunctional “games” played and their detrimental effect on supply chains in “The Impact of Sales Forecasting Game Playing on Supply Chains”; these include Enforcing, Hedging, Sandbagging, and Filtering. Issue 5 (2006) featured an article by Rogelio Oliva and Noel Watson, “Managing Functional Biases in Organizational Forecasts.” In Issue 2 (2005), Elaine Deschamps recommended “Six Steps to Overcome Bias” with examples from the public and private sectors.

At the individual forecaster level, Foresight articles have addressed concerns about biases, both conscious and subconscious. Paul Goodwin summarizes the “hindsight bias” in his Issue 17 (2010) column “Why Hindsight Can Damage Foresight.” Oliva and Watson returned in Issue 25 (2012) to examine sources of bias such as “blind spots” and “incentive misalignment.” And most recently (Issue 61, 2021), Jon Karelse analyzes his survey results for identifying and “Mitigating Unconscious Bias in Forecasting.”

In his comprehensive examination of individual biases, Nobel laureate Daniel Kahneman, author of Thinking, Fast and Slow among other works, helped us come to grips with the shortcuts – heuristics – people use to make rapid decisions, and how these too often lead to misjudgment and error-prone predictions. Now, a decade later, Kahneman has teamed with Olivier Sibony and Cass Sunstein to write Noise: A Flaw in Human Judgment. The authors emphasize in this new work the distinction between bias and noise. Where bias is the systematic tendency to misjudge in the same way (e.g. to underforecast most of the time), noise – unwanted variability – is a phenomenon due to “the luck of the draw” in selections of the decision maker; for example, which judge is assigned to a case involving sentencing of a criminal. Noise aggravates uncertainty, undermines efficiency, and creates distortions and inequities.

Foresight Associate Editor Stephan Kolassa and I collaborated to write the book review of Noise that begins this issue of Foresight. It is followed by a commentary from Christopher Plummer, who takes issue with Jon Karelse’s characterization of forecasting biases as “unconscious”:

When we make choices, perform judgments, and evaluate competing propositions, we are engaged in completely cognitive functions. Our cognitive biases are not unconscious, as has long been recognized by behavioral scientists.

Our previous issue (2021:Q3) presented a variety of perspectives on the distinction between risk and uncertainty and the question of whether we can assign probabilities to uncertain scenarios of the future. Yes, we can and  should, argued Peter Scoblic and Philip Tetlock in their article “A Better Crystal Ball: The Right Way to Think About the Future.” Not so fast was the reaction of most of our featured commentators: scenarios are more about plausibility, and we can’t really think probabilistically about uncertainty.

Now, in this issue, Scoblic and Tetlock respond to these critiques, saying we need to balance…

Presenting a middle ground is the first of a two-part article from Steve Morlidge and Paul Goodwin, “Into the (Largely) Unknown: A Simple Way to Handle Uncertainty.” The authors introduce the concepts of Possibility Theory and offer possibility distributions as a way to characterize the plausibility of alternative futures. Part 2 will follow in the 2022:Q1 issue.

Ira Sohn examines “The Impact of COVID-19 on the Economy and Strategic Environment of the United States” through a review of reports from the U.S. Department of Labor’s Bureau of Labor Statistics (BLS) and the U.S. National Intelligence Council (NIC), both released earlier in 2021. The BLS report projects the pandemic’s impact on the U.S. labor market to 2029, while the NIC presents keypresents key trends and uncertainties that will shape the U.S. strategic environment out to 2040.

Elizabeth Yardley and Fotios Petropoulos criticize the exclusive use of forecast error metrics to evaluate forecast methods, arguing for consideration of forecast value, a construct that also accounts for how the forecast is used in decision making as well as the costs incurred in computation. Their piece is called “Beyond Error Measures to the Utility and Cost of the Forecasts.”

This issue concludes with “Integrated Business Planning: A New Narrative for an Old Process,” as authors Niels van Hove and Hein Regeer give us their insights on the future of business planning. They write that it will be a thoroughly new look, one in which decision making is supported by Wave 3 technology, enabling widespread automation, knowledge augmentation, and tighter integration of planning into day-to-day operations.

The FAB welcomes newest member Chris Turner, Principal of Stratabridge (www.stratabridge.com), a boutique management consulting firm in the UK. Chris has decades of experience working with companies to leverage their culture, process, and capabilities to develop effective strategies. See his visionary article in the previous issue of Foresight (2021:Q3), “Strategy in Uncertain Times: Lenses to Approach Decision Making, Forecasting, and Planning.”