In a February 2015 post Offensive vs. Defensive Forecasting, I sought to distinguish two very different approaches to the business forecasting problem:

Last week I delivered the opening keynote at the Foresight Practitioner Conference -- a unique event with a theme of "Worst Practices in Business Forecasting." This is the first of a 12-part blog series based on that keynote, in which I advocate a change from an offensive to a defensive paradigm for business forecasting.

The Structure of Scientific Revolutions

Some of the more seasoned readers of The BFD may recall an important and influential book published over 50 years ago, Thomas S. Kuhn’s The Structure of Scientific Revolutions. I was recently reminded of this book when in appeared in Parade Magazine's list of The 75 Best Books of the Past 75 years. 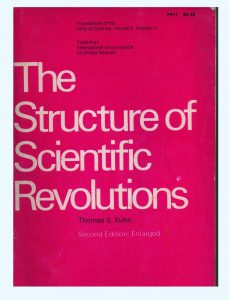 For me, as a philosophy and math student in the 1970’s, Kuhn’s book was required reading. But the book’s argument, about the nature of the progression of scientific knowledge, has had influence well beyond its original intended audience. And I think it can be applied to business forecasting today.

One word that will forever be associated with the book is paradigm. But what is a paradigm? And what did Kuhn mean by it?

You can think of a paradigm as a worldview, a framework, a natural human way to see and comprehend everything that’s around us.

We need a paradigm to manage and explain all the observations we are constantly bombarded with. The world would not make any sense if it were all just random sights and sounds and tastes and touches. We need a paradigm to organize our perceptions, and make them understandable.

The specific question Kuhn began considering is how does science progress?

It seems to progress like this – that over time we accumulate more observations or facts, we fine-tune our theories to explain those facts, and create experiments to test those theories. This is what Kuhn called “normal science” – a long, gradual, continuous progression of scientific knowledge.

Kuhn contends that the practitioners of normal science are guided by a paradigm, a shared worldview, a common understanding of what the world is like. The paradigm legitimatizes the problems or “puzzles” that the scientific community works on. Normal science proceeds by filling in the gaps and fleshing out the details -- all within the context of the paradigm that the community believes in.

As an historical example, for thousands of years astronomy was practiced under a geocentric paradigm, with the earth as the center of the universe. The moon, the planets, and the sun circle the earth each day. And even the distant stars revolved around the earth in a celestial sphere.

Over the centuries as more observational data was gathered, and measurement improved, minor adjustments had to be made. For example, planets sometimes appear to be moving backwards against the backdrop of the stars, a phenomenon known to as “retrograde motion.”

So the geocentric model had to be tweaked, with the notion of small “epicycles” being added to the circular planetary orbits. This provided an explanation for the anomalous observations, while still preserving the overall geocentric paradigm.

[See all 12 posts in the business forecasting paradigms series.]